GameStop shares have soared 1,700 percent as millions of small investors, egged on by social media, employ a classic Wall Street tactic to put the squeeze — on Wall Street. 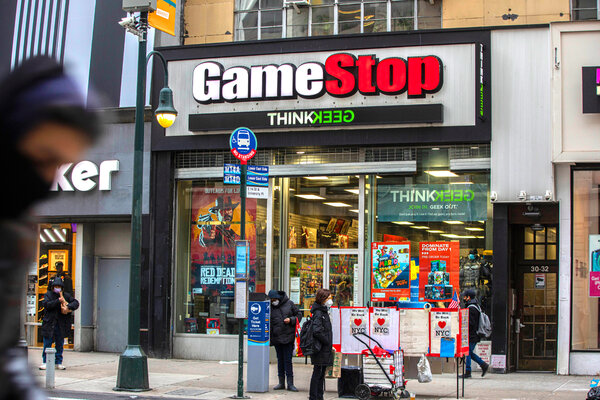 By Matt Phillips and Taylor Lorenz

A real estate salesman in Valparaiso, Ind. A former line cook from the Bronx. An evangelical pastor and his wife in Huntington Beach, Calif. A high school student in the Milwaukee suburbs.

They are among the millions of amateur traders collectively taking on some of Wall Street’s most sophisticated investors — and, for the moment at least, winning. Propelled by a mix of greed and boredom, gleefully determined to teach Wall Street a lesson, and turbocharged by an endless flow of get-rich-quick hype and ideas delivered via social media, these investors have piled into trades around several companies, pushing their stock prices to stratospheric levels.

Some of the names are from an earlier business era. BlackBerry’s shares are up nearly 280 percent this year. Stock in AMC, the movie theater chain, has surged nearly 840 percent. But the trade that captures the David-versus-Goliath nature of the moment involves GameStop, the troubled video game retailer that was once a fixture in suburban malls.

On Wall Street, individual investors are often derided as “dumb money,” destined to lose against the highly compensated analysts and traders who buy and sell stocks for a living. But in recent days, individual investors — many of them followers of a popular, juvenile, foul-mouthed Reddit page called Wall Street Bets — have upended that narrative by banding together to put the squeeze on at least two hedge funds that had bet that GameStop’s shares would fall.

While the hedge funds and other professional money managers had been shorting GameStop’s shares, betting that its stock was doomed to further decline, the retail investors — online traders, mom-and-pop investors, small brokers and others — have been pushing the other way, buying shares and stock options. That caused GameStop’s market value to increase to over $24 billion from $2 billion in a matter of days. Its shares have risen over 1,700 percent since December. Between Tuesday and Wednesday, the market value rose over $10 billion.

The tribal framing online, as a kind of team sport pitting plucky upstarts against well-heeled Wall Streeters, has been especially helpful in motivating more investors to participate. This week, Tesla’s chief executive, Elon Musk, fueled the trading by posting about the Reddit page on Twitter. And speculation is growing that other investors are seeing fresh opportunities to push the stock even higher.

Ben Patte, 16, a high school student in Wisconsin who said he made $750 off GameStop stock, said the campaign felt like vindication for himself and fellow young traders. “It’s a good opportunity to make money and stick it to the hedge funds,” he said. “By buying GameStop, it’s kind of like beating them at their own game.”