Stocks on Wall Street rose on Monday as investors bid up shares of health care companies as they reported progress on products that could help with the coronavirus outbreak.

The S&P 500 climbed more than 3 percent, adding to a strong showing last week. The S&P 500 had risen 10 percent last week after a three day run that was its best since 1933, amid relief over Washington’s $2 trillion spending plan.

Gainers on Monday included Johnson & Johnson, which said it had identified a lead candidate for a vaccine for the virus and planned to ramp up both production and clinical testing. Also, Abbott Laboratories rose on reports that it had said a new test that could detect the virus in five minutes had been cleared for use by the Food and Drug Administration.

But there were lingering signs of caution in the financial markets. Most notably, oil prices tumbled to their lowest levels since 2002.

And in the stock market, Monday’s rally came on relatively light volume, said Matt Maley, chief market strategist at Miller Tabak, a trading and asset management firm. That suggests a lack of conviction among investors, he said.

“It’s a little bit of lack of confidence,” said Mr. Maley, “And you can’t blame them after what’s happened.”

And some industries continued to be battered by the long shadow of the virus. Cruise lines Royal Caribbean, Norwegian and Carnival were all down 10 percent, making them some of the worst performers in the S&P 500 on Monday. United Airlines, American Airlines and Boeing, all of which had rallied last week amid expectations that they would benefit from government assistance, also fell sharply.

The dizzying moves that characterized trading in financial markets for most of March seem to have ended as policymakers around the world moved to bolster their economies with spending and other means of support. But investors were weighing those efforts against the rising number of coronavirus cases, and redoubled efforts to contain them.

President Trump on Sunday extended guidelines on social distancing and nonessential travel in the United States, an admission that there is no certainty around when the spreading coronavirus epidemic will end.

In the oil market, brent crude, the international benchmark, fell more than 6 percent to roughly $26 a barrel on Monday. West Texas Intermediate, the U.S. benchmark, was down more than 5 percent with prices hovering around $20.25 in early afternoon trading. Earlier this morning the price had briefly dropped below $20 a barrel, a level not seen in almost 20 years.

Oil has also been hammered by a price war between Saudi Arabia and Russia, two of the largest oil producers, but analysts say that it is far outweighed by the collapse in demand caused by the pandemic.

FGE, a consulting firm, recently estimated that demand for April would fall by 17 million barrels a day — about 17 percent lower than usual — as airplanes are grounded, road traffic falls sharply and factories are shuttered.

Macy’s has lost the ‘majority’ of its sales. 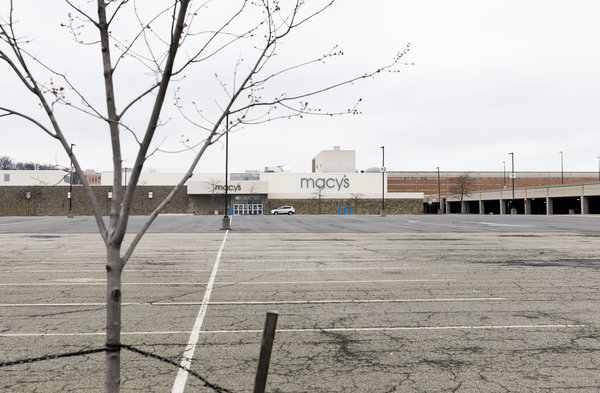 Macy’s, which also owns Bloomingdale’s and Bluemercury, said on Monday that it had lost “the majority” of its sales because of store closures, which started March 18 and would persist until the retailer had a “clear line of sight on when it is safe to reopen.”

The company said that as a result, it will furlough the majority of its employees this week and maintain the “absolute minimum work force needed to maintain basic operations,” according to a statement. There will be fewer furloughs among employees supporting the digital business at call centers and distribution centers. Macy’s had 125,000 part-time and full-time employees at the end of last year.

The move shows the strain that the pandemic is placing on retailers selling goods that are considered nonessential. Many department stores and mall chains had already been weakened in recent years by the rise of e-commerce and a drop in foot traffic at malls. A complete closure of stores and a shift in consumer spending is dealing a new blow to such companies and their many employees.

Macy’s also said that it had already stopped capital spending and paying a dividend. It has also drawn down its line of credit and canceled some orders.

Retail workers have been affected across the board. L Brands, which owns Victoria’s Secret and Bath & Body Works, said it would furlough most store staff and “those who are not currently working to support the online businesses or who cannot work from home” starting April 5. Nordstrom said last week that it would furlough “a portion of corporate employees” on April 5 for six weeks. Rent the Runway laid off its retail employees through a Zoom call on Friday, according to The Verge, while Everlane laid off and furloughed nearly 300 of its workers.

The nation’s largest news publisher lays out an austerity plan.

Gannett, the largest newspaper publisher in the United States, said on Monday that it would impose pay cuts and furloughs on its staff, making it the latest news company to acknowledge that reader interest prompted by the coronavirus pandemic has not made up for a sharp downturn in advertising revenue.

Employees learned of the austerity plan through a memo sent by Paul Bascobert, the chief executive of Gannett’s operating company.

In the memo, which was obtained by The New York Times, Mr. Bascobert said that advertising had fallen off, despite an increase in web traffic and subscriptions. “Overall, though,” he added, “we expect our revenue to decline considerably during this period.”

He said that company executives had agreed to 25-percent pay cuts and he would not take his salary until the measures were reversed.

In a separate memo shared with the staff, Gannett said the moves would affect “the majority” of company employees, and that some would be furloughed one week each month in the months to come.

Rent or electricity? Monthly bills are due in a few days. Many won’t be able to pay.

On Wednesday, April 1, many monthly bills will come due, and households and businesses across the nation will struggle to make their payments.

Residents won’t make rent, and small businesses will have to forgo lease payments. Even the multibillion-dollar Cheesecake Factory has told landlords not to expect an April check.

The trajectory of the U.S. economy largely depends on how many bills go unpaid. The $2 trillion relief package President Trump recently signed into law will be too late to help many.

Homeowners will have to choose between rent or electricity. Businesses could start laying off workers.

“These are cascades that, once they get going, are very hard to stop,” according to Claudia Sahm, head of macroeconomic policy for the Washington Center for Equitable Growth. “You’re already seeing it.”

Democrats want Treasury and the Fed to bail out states.

Top Democrats are urging the Treasury Department and Federal Reserve to use nearly $500 billion from the $2 trillion economic rescue package that became law last week to bail out strapped states and cities, instead of granting loans to large corporations.

The law appropriates $454 billion from Treasury to backstop loans from the Fed to eligible businesses, municipalities or states. Officials have so far focused their emergency lending programs on businesses. Senator Elizabeth Warren of Massachusetts wrote to Treasury on Friday, calling the needs of local and state governments “a matter of life and death.”

The Fed has come under increasing pressure to help state and municipal finance, potentially by investing directly in local debt, though it has thus far declined to. Some of its programs help local bond markets, but do so indirectly.

Investors widely expect the central bank to unveil some sort of program to provide additional support to states and localities. The central bank has recently hired Kent Hiteshew, a former Treasury official who is an expert in municipal debt, a spokesman confirmed.

How much could coronavirus add to everyone’s health insurance costs?

Insurance premiums could surge as much as 40 percent as the country confronts tens of billions of dollars in extra costs treating patients with the virus.

If the pandemic puts millions of Americans in hospitals, private health insurance costs will jump next year, according to a new analysis. Insurers, employers and individuals could face as much as $251 billion in additional expenses from testing and treatment of the virus.

But there are still a lot of unknowns. How many people will be affected? How many will need hospitalization? These factors could alter the costs significantly.

Insurance companies, in anticipation of the astronomical increase in costs, have asked Congress for help by setting up a special reinsurance program that would cover the most expensive claims and lower premiums to employers and insurance companies.

Carnival, the hard-hit cruise company, has already tapped a $3 billion credit line and said in regulatory filings that it was looking for new financing. The cruise company is working with Wall Street banks to line up investors for a high-interest debt offering, said one person briefed on the matter but not authorized to speak publicly.

It’s one of just many corporations across a wide swath of industries and in vastly different financial straits that are being forced to stretch their cash, cut costs, avoid loan defaults and prepare to potentially reorganize their businesses.

For one group in the financial services industry — restructuring and bankruptcy advisers and lawyers — the emerging signs of pain for companies, both big and small, spell booming business.

Instacart shoppers are staging a walkout over safety concerns.

In a sign of workers’ growing anxiety as the coronavirus pandemic rages, thousands of drivers and shoppers for the grocery delivery service Instacart walked off the job on Monday, demanding greater pay and better access to paid leave and cleaning material.

Though the size of the walkout was unclear, organizers said they believed that thousands of the company’s 200,000 shoppers, who work as independent contractors, were refusing to work. Their hope is to pressure the company by adding to backups that the service was already experiencing, as locked-down Americans have opted to get their daily staples delivered rather than venture out to stores.

The strike appeared to be having some effect on Monday. Ryan Hartson, an Instacart worker in Chicago, shared a screenshot from his Instacart app showing that many time slots were available for shoppers to pick up groceries, suggesting that the supply of workers was smaller than usual.

“Our team has had an unwavering commitment to prioritize the health and safety of the entire Instacart community,” Nilam Ganenthiran, president of Instacart, said in a statement. “We’ve been evaluating the Covid-19 crisis minute-by-minute to provide real-time support for Instacart shoppers and customers.”

As for Monday’s action, “we’ve seen absolutely no impact to Instacart’s operations,” a company spokeswoman said.

Catch up: Here’s what else is happening.

See’s Candies, the California chocolatier, said in a statement on its website that it was halting production, just the second interruption in its 99-year history (the first time was during World War II). “In recognition of the guidance provided by local health authorities, See’s has suspended production and shipping of product,” the company said.

Facebook announced Monday that it would give out $25 million in grants to local news organizations and spend $75 million in marketing that will go to news outlets internationally. Campbell Brown, a Facebook vice president, acknowledged in an interview that the company, whose huge chunk of online ad revenue helped dent media companies’ business models in the first place, felt a “responsibility” to help out.

Disney joined other conglomerates in slashing salaries for executives by up to 30 percent. Bob Chapek, Disney’s new chief executive, said in a companywide email that he would take a 50 percent reduction and that Robert A. Iger, the executive chairman, would forgo his salary altogether, which totals $3 million annually according to securities filings.