HONG KONG — Its lenders are pushing for bankruptcy. Its chairman and co-founder has been quietly stripped of power. Nearly $10 billion of its money has been embezzled.

HNA Group, the vast Chinese conglomerate that threw tens of billions of dollars at trophy businesses around the world, is nearing the biggest corporate collapse in recent Chinese history. Its dismantling is an extraordinary turn of events for the company that began as a regional airline in China’s southern province of Hainan and grew to own large stakes in Hilton Hotels, Deutsche Bank, Virgin Australia and others. At its height, HNA employed 400,000 people around the world.

For China’s leadership, HNA is now a cautionary tale. Its story offers a glimpse of how Beijing treats its most powerful entrepreneurs. China has been taking a firmer grip on the economy, and regulators have recently circled in on another empire — that of China’s most famous billionaire, Jack Ma.

“It’s a sharp reminder to China’s private sector and big highflying companies and executives that you’re never more important than the Communist Party,” said Jude Blanchette, a China scholar at the Center for Strategic and International Studies in Washington. “The reining in of big corporations is not exactly central planning, but it’s certainly putting guardrails on corporate behavior to make sure that they are heading in the right direction.”

Pressure is mounting on companies whose behavior could pose a risk to China’s financial system. Xi Jinping, China’s top leader, told a meeting of the country’s senior Communist Party officials late last month that the government must foresee and anticipate risks even as it pursues growth. He urged officials to make plans to deal with “gray rhinoceros” events, referring to large and evident problems in the economy that are ignored until they become urgent threats. Chinese media had often referred to HNA as a gray rhino before its decline. 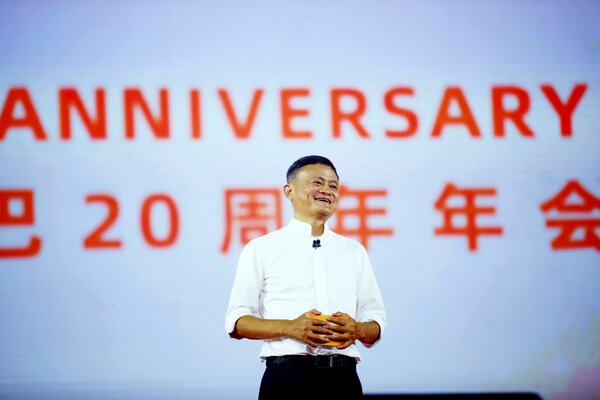 The party has strengthened its hand in private business in recent months and urged entrepreneurs to “identify politically, intellectually and emotionally” with its goals. It has also pledged to prevent what it called the “disorderly expansion of capital,” a reference to the type of lavish spending of borrowed money for which HNA had become known.

Among the party’s recent high-profile targets is the Chinese online shopping giant Alibaba Group. In December, the authorities launched an antitrust investigation into the company, which was co-founded by Mr. Ma. One month earlier, days before a planned initial public offering of Mr. Ma’s finance giant, Ant Group, regulators stepped in to stop it.

HNA was once the face of modern corporate China, a leader in the first wave of private Chinese companies with political backing to make large global acquisitions. Its propensity to load up on borrowed money to buy stakes in global household names was expensive and risky, seemingly daring regulators in Beijing and around the world to bring it to heel.

As HNA’s creditors wait for a Chinese court to approve their request for bankruptcy and restructuring, questions are being raised about the scale of the conglomerate’s problems. It has $200 billion of debts it cannot pay off, and those who are owed money will have to sift through dozens, possibly hundreds, of its subsidiaries, said Michelle Luo, a bankruptcy lawyer at Hui Ye law firm.

HNA’s insolvency is the largest China has seen since the country first began using its bankruptcy law in 2007, Ms. Luo said. It will also test the law’s strength — just 76 listed companies have gone through bankruptcy proceedings in China.

Much of HNA’s restructuring will likely happen behind closed doors and with heavy state involvement. Officials from China’s civil aviation administrator and China Development Bank, the country’s main policy bank, stepped in last year to take over the management of some of the company’s affairs, and two government officials joined the board of directors.

The fate of Chen Feng, HNA’s chairman and co-founder, has been in question since he was removed from a list of members of HNA’s Communist Party committee, the company’s main decision making body, according to an official notice late last month.

As he built up HNA, Mr. Chen imprinted its corporate culture with his own personal interests as a Buddhist and calligrapher. A former People’s Liberation Army pilot, Mr. Chen said he was different from other entrepreneurs. “I don’t drink, smoke, have banquets, go to karaoke or get massages,” he once told the South China Morning Post. He had the company’s headquarters in Hainan built to look like a Buddha.

For years, doors opened for the company. It was given cheap financing from China’s state-backed banks. Its executives had the kind of political connections that private companies in China could only dream of.

During his first state visit to Britain, China’s top leader, Xi Jinping, made an appearance at an event in Manchester for HNA’s Hainan Airlines. Mr. Chen was once an aide to Wang Qishan, China’s vice president. Another HNA executive struck a partnership with the son of Wen Jiabao, the former premier of China, The New York Times reported in 2018.

HNA had clout abroad, too. One of its earliest backers was George Soros, the billionaire investor. Its executives mixed with Wall Street’s power brokers at black-tie galas and met with top leaders in Washington. They struck a business deal with Gov. Jeb Bush. They tried to buy Skybridge Capital, an investment firm co-founded by Anthony Scaramucci, who at the time was expecting to become a liaison between the White House and the United States business community. (The deal was abandoned after the companies realized regulators would not approve it.)

But HNA’s glory days became numbered when authorities in China began to scrutinize the enormous debt that HNA and some of its politically connected peers like Anbang Insurance Group, Fosun International and Dalian Wanda were taking on to fuel their global shopping sprees.

The authorities seized control of Anbang, a troubled insurance conglomerate that owned the Waldorf Astoria hotel in New York, and sentenced its founder, Wu Xiaohui, to prison for 18 years for fraud. Wanda, the one-time owner of AMC Entertainment, and Fosun, which owns Club Med and the luxury fashion house Lanvin, quickly sold off some of their overseas acquisitions.

As HNA turned to its own growing bill, it started shedding some of its companies. It also sought to borrow money from its own employees by offering them high-interest investment products.

China’s state-controlled news media has sought to depict HNA’s bankruptcy proceedings as a measure aimed at protecting the company’s assets rather than an attempt to strip it down to the bare bones.

“The focus of the bankruptcy and restructuring is not about ‘destroying,’ but about ‘building,’” one commentary in the Shanghai Security News said. “It can also be seen as a ‘rebirth.’”

On Chinese social media, some customers of HNA’s airlines asked if their tickets would be refunded, while people who had invested in its investment products complained the company would pay back the banks before it got around to returning money it borrowed from ordinary people. Others said they were unsurprised at the company’s ultimate fate.

“In the end, HNA Group still failed,” Chen Haijian, a finance professional in Nanjing, wrote on his personal page on WeChat, a Chinese social media platform.

“It feels like people have been saying this sentence for more than 10 years.”