On the crowded waterside quay of Dublin’s Silicon Docks neighborhood, Google’s European headquarters tower above the skyline. Facebook and Twitter are neighbors. The European bases of Apple, Pfizer and hundreds of U.S. multinationals are implanted around the country, symbols of the commerce produced by Ireland’s famously low corporate taxes.

But the model that has fueled the so-called Celtic Tiger economy for decades is in peril, as a coalition of 130 nations works to overhaul a global tax system that Ireland depends on to lure businesses looking to reduce the taxes they pay.

As ministers from the Group of 20 major economies gather Friday in Venice for a two-day summit to hash out details for a historic accord that would limit tax dodging by multinational firms, Ireland is hunkering down to battle what amounts to a major threat to its livelihood.

“Ireland is very much a tax haven operating in Europe, so it makes sense that Ireland will resist this as hard as they can,” said Alex Cobham, the chief executive of the Tax Justice Network, an advocacy group that fights tax avoidance. “The Celtic Tiger is something to be proud of, and if the model is breaking they need to look like they are defending it as much as possible.”

The battle lines drawn by the Irish government have cast a global spotlight on the nation of five million people — and fanned controversy among the Irish themselves.

At stake is Ireland’s low official corporate tax rate of 12.5 percent and a tax regime that helps global companies based there avoid paying taxes to other countries where they make profits, a setup that has put billions of euros into Ireland’s tax coffers and created hundreds of thousands of jobs. 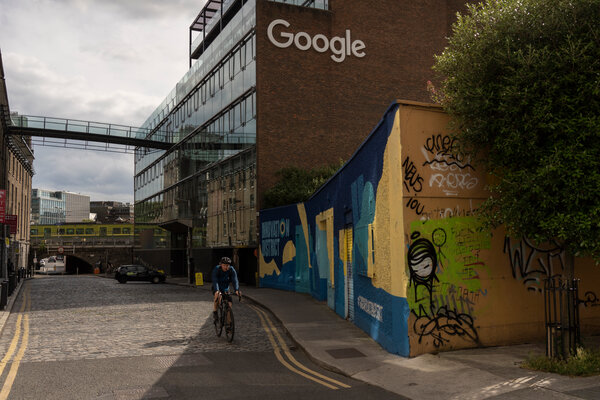 Ireland was one of only nine countries not to sign on to the sweeping framework last week, overseen by the Organization for Economic Cooperation and Development, that could undermine those advantages. The accord would impose a new 15 percent global minimum corporate tax rate and force technology and retail giants to pay taxes where their goods or services were sold, rather than where the company had its headquarters. The details of the agreement are expected to be completed in October, and then each country’s government would need to adopt it.

While Ireland has said it supports many aspects of the proposal, it is joining with a group of low-tax nations to push at the G20 meeting for terms that would allow small countries to make up for the loss of any tax advantage.

Ireland will seek a “comprehensive, sustainable and equitable agreement,” Paschal Donohoe, the finance minister, said in a statement last week.

Almost every major corporation tries to minimize its taxes. But tax rates have become a contentious issue for the world’s governments as public finances deteriorate after more than a year of grappling with the pandemic. A 15 percent minimum tax would generate $150 billion in additional tax revenue each year, the O.E.C.D. has said.

The stakes are especially high for Ireland, which is in the company of notorious tax havens like Barbados as it fences with the United States and its major allies in Europe.

Some might say the optics aren’t good — Ireland risks looking as if it wants to deprive other countries of their fair share of tax revenue — and the government in Dublin has been grudging in its statements on the issue. The finance ministry declined interview requests and did not respond to written questions. Similarly, multinational companies that have profited from the low-tax regime have been conspicuously silent, declining requests to discuss the issue.

Behind the scenes, pro-business lobbies, including influential global accounting firms that have long profited from the business of helping multinationals in Ireland avoid tax, like Accenture and Ernst & Young, are said to be pressuring the Irish government to hold its ground.

But critics say tax-driven industrial policy has had its day, and caution the government against risking Ireland’s standing with the United States and the rest of Europe by fighting what is likely to be a losing battle.

“The government seems determined to show the world that Ireland is a rogue state,” a column in The Irish Times said this week. “It is bafflingly foolish to nail our colours to the mast of a sinking ship.”

An overhaul of the global tax order could cost Ireland 2 billion to 3 billion euros annually in lost tax revenue, the finance ministry estimates. Much of that money would go to other countries.

Overall, the Irish government hauled in €12 billion in corporate taxes last year, up from €4 billion seven years ago. Over half of the take came from the 10 largest multinationals.

But the shift wouldn’t necessarily prompt Google, Pfizer or other global companies in Ireland to leave — at least not immediately, not after they have invested time and money making the country their European base, analysts said.

After all, companies didn’t flee when an O.E.C.D. accord closed tax avoidance schemes last year with names like the “Double Irish With a Dutch Sandwich,” which Apple and other tech giants used to slash their global tax bills through Ireland for more than a decade.

Continued investment has made Ireland’s economy one of the most resilient in Europe. Over 800 U.S. companies are present, spending €20 billion ($23.6 billion) annually on investments, goods and services and payroll, according to American Chamber of Commerce data. They employ an estimated 180,000 workers and indirectly support another 144,000 jobs in Ireland’s economy.

The largess can be seen on the streets of Dublin and beyond, where some of Europe’s most robust tech and pharmaceutical clusters have blossomed over the years.

Construction companies build ever more housing and office space to accommodate the multinationals’ expansion. In Silicon Docks, Google’s European headquarters alone span four buildings, featuring a wellness center and a swimming pool. Over the years, cash has flowed to hotels, retailers, restaurants and pubs where well-salaried employees spend their income.

Critics say Ireland’s tax regime has led to a two-speed economy in which multinationals and their employees pull ahead while the domestic economy plods along. While the government has vowed to address such issues, it is also concerned about the impact on future foreign investment should Ireland no longer be able to use low taxes as its main calling card.

“Ireland will become a less attractive place for multinational investment in future years,” said James Stewart, an adjunct professor of finance at Trinity College in Dublin. “You won’t get a sudden bang, but there will be a gradual shift away.”

The O.E.C.D. insists that countries could still offer tax holidays and exemptions as long as they complied with minimum corporate tax levels. Ireland could, for example, continue to offer the so-called Knowledge Development Box, a special 6.25 percent rate for revenue tied to companies’ patents and other intellectual property.

Analysts say Ireland could sign on to the agreement, bump its corporate tax rate to 15 percent and grab more income without a huge risk that companies would move their European headquarters to the continent.

Hungary or Switzerland may have lower taxes but lack Ireland’s broad tech industry and a flexible English-speaking work force. Ireland also has a relatively stable social compact between unions and companies.

Pharmaceutical giants like Novartis, Pfizer and Abbott also have little incentive to move their research and production facilities. Cork in southern Ireland is the main European base for 24 of the world’s 25 biggest pharmaceutical companies.

Even if much of their profit is made in big markets like France and Germany — which would now be able to grab a larger chunk of the taxes they had been paying in Ireland — analysts point to high business taxes and labor costs, and a complex regulatory landscape as disincentives to move.

Multinationals have invested billions in Ireland precisely because successive Irish governments have provided tax certainty. The corporate tax is so sacred that during Europe’s debt crisis in 2010, the Irish government refused to lower the tax to secure a bailout from the International Monetary Fund, opting instead to cut the minimum wage and social safety net to make austerity savings.

But with most of the world now backing a 15 percent global corporate tax, Ireland is likely to relent at the end of the day, provided it wrests concessions from bigger countries to help keep a competitive edge.

“Ireland has benefited a lot from the tax advantage it has provided to multinationals,” said Ricardo Amaro, a senior economist at Oxford Economics in Dublin. “Going forward, they will have to come up with a strategy that relies on nontax tools such as a stable regulatory environment and skilled work force to lure investment.”

“That has got to be their Plan B,” he added.