(Reuters) – U.S. astronauts Bob Behnken and Doug Hurley, who flew to the International Space Station in SpaceX’s new Crew Dragon, splashed down in the capsule in the Gulf of Mexico on Sunday after a two-month voyage that was NASA’s first crewed mission from home soil in nine years. 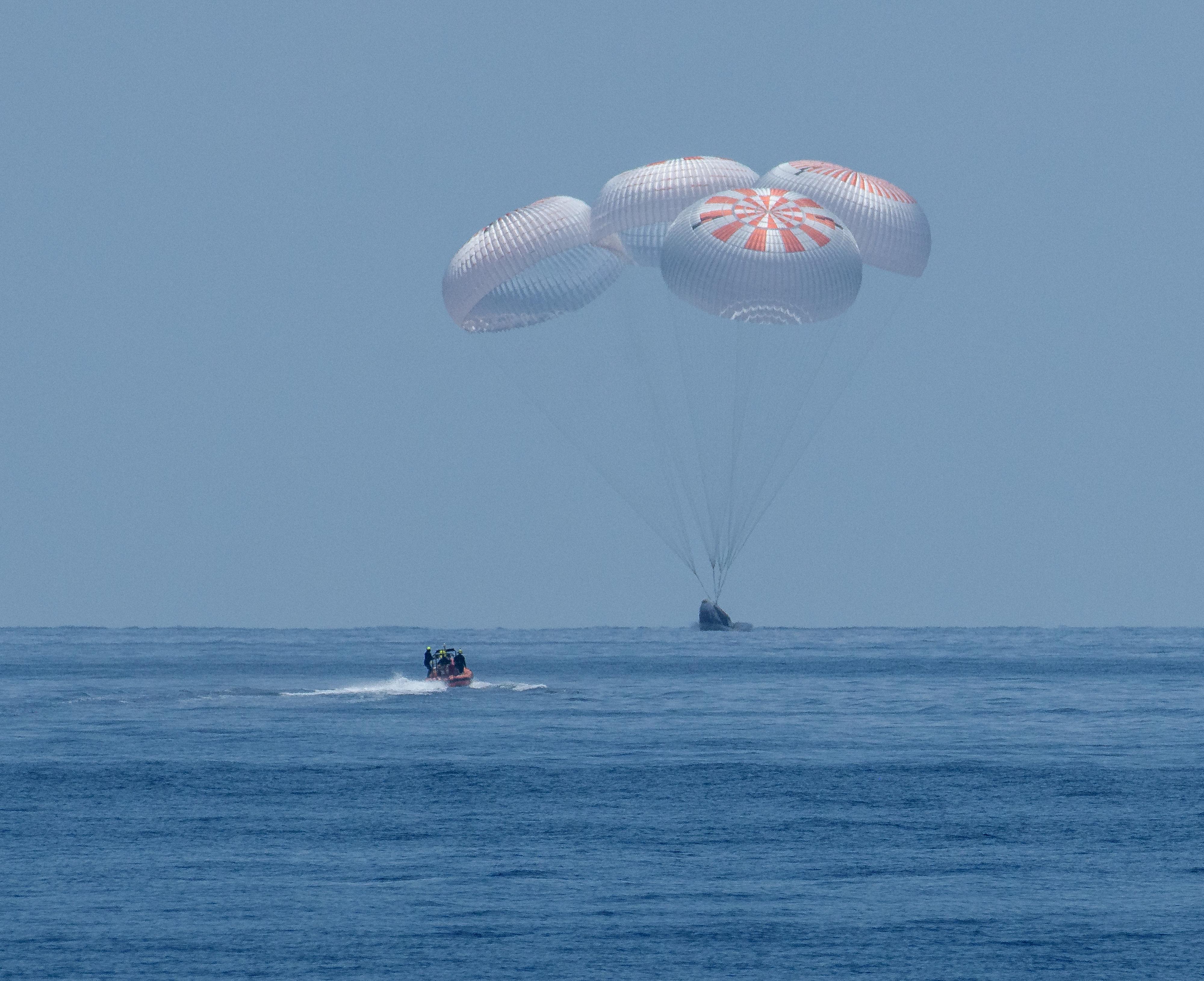 Behnken and Hurley, tallying 64 days in space, undocked from the station on Saturday and returned home to land in calm waters off Florida’s Pensacola coast on schedule at 2:48 p.m. ET following a 21-hour overnight journey aboard Crew Dragon “Endeavor.”

The successful splashdown, the first of its kind by NASA in 45 years, was a final key test of whether SpaceX chief executive Elon Musk’s spacecraft can transport astronauts to and from orbit — a feat no private company has accomplished before.

“This was a great day for NASA and a great day for the United States of America,” NASA administrator Jim Bridenstine told reporters during a news conference. “Today we really made history.”

Despite Coast Guard restrictions and safety risks, spectators in private boats surrounded the splashdown site dozens of miles from shore as SpaceX and NASA recovery teams used a crane to hoist the spacecraft out of the water and onto a boat.

The crew’s retrieval from the capsule was delayed slightly as the teams worked to flush its fuel tanks after sensing traces of nitrogen tetroxide fumes, a toxic gas from one the spacecraft’s flammable fuels.

While the trace amount of fumes were common with astronaut capsules, Bridenstine said, “what is not common is having passers-by approach the vehicle at close range with nitrogen tetroxide in the atmosphere. That is not something that is good.”

Hurley, giving a thumbs up as he was wheeled out of the spacecraft on a stretcher, a normal procedure as astronauts adjust to Earth’s gravity, said, “I’m just proud to be a small part of this whole effort to get a company and people to and from the space station.”

“Thanks for doing the most difficult parts and the most important parts of human spaceflight – getting us into orbit and bringing us home,” Behnken told SpaceX mission control in Hawthorne, California, as the hatch door was opened.

For the return sequence, on-board thrusters and two sets of parachutes worked autonomously to slow the acorn-shaped capsule, bringing Behnken and Hurley’s speed of 17,500 miles per hour in orbit down to 350 mph upon atmospheric reentry, and eventually 15 mph at splashdown.

The pair were due to undergo medical checks onshore in Pensacola ahead of a flight to NASA’s Johnson Space Center in Houston, Texas.

NASA officials have said Crew Dragon, a pod with seven astronaut seats, was in a “very healthy” condition while docked at the space station, where astronauts conducted tests and monitored how the spacecraft performs in space.

NASA, aiming to galvanize a commercial space marketplace, awarded nearly $8 billion to SpaceX and Boeing Co collectively in 2014 to develop dueling space capsules, experimenting with a contract model that allows the space agency to buy astronaut seats from the two companies.

Billionaire entrepreneur Musk’s SpaceX became the first private company to send humans to orbit with the launch of Behnken and Hurley.

“Congratulations SpaceX & NASA on completing first crewed Dragon flight!!,” Musk wrote on Twitter after the splashdown, adding a U.S. flag emoji followed by “returned” — referring to a rivalry with Boeing Co over which company’s astronaut crew would be the first to retrieve an American flag left on the space station in 2011, when the last crewed mission launched from U.S. soil. 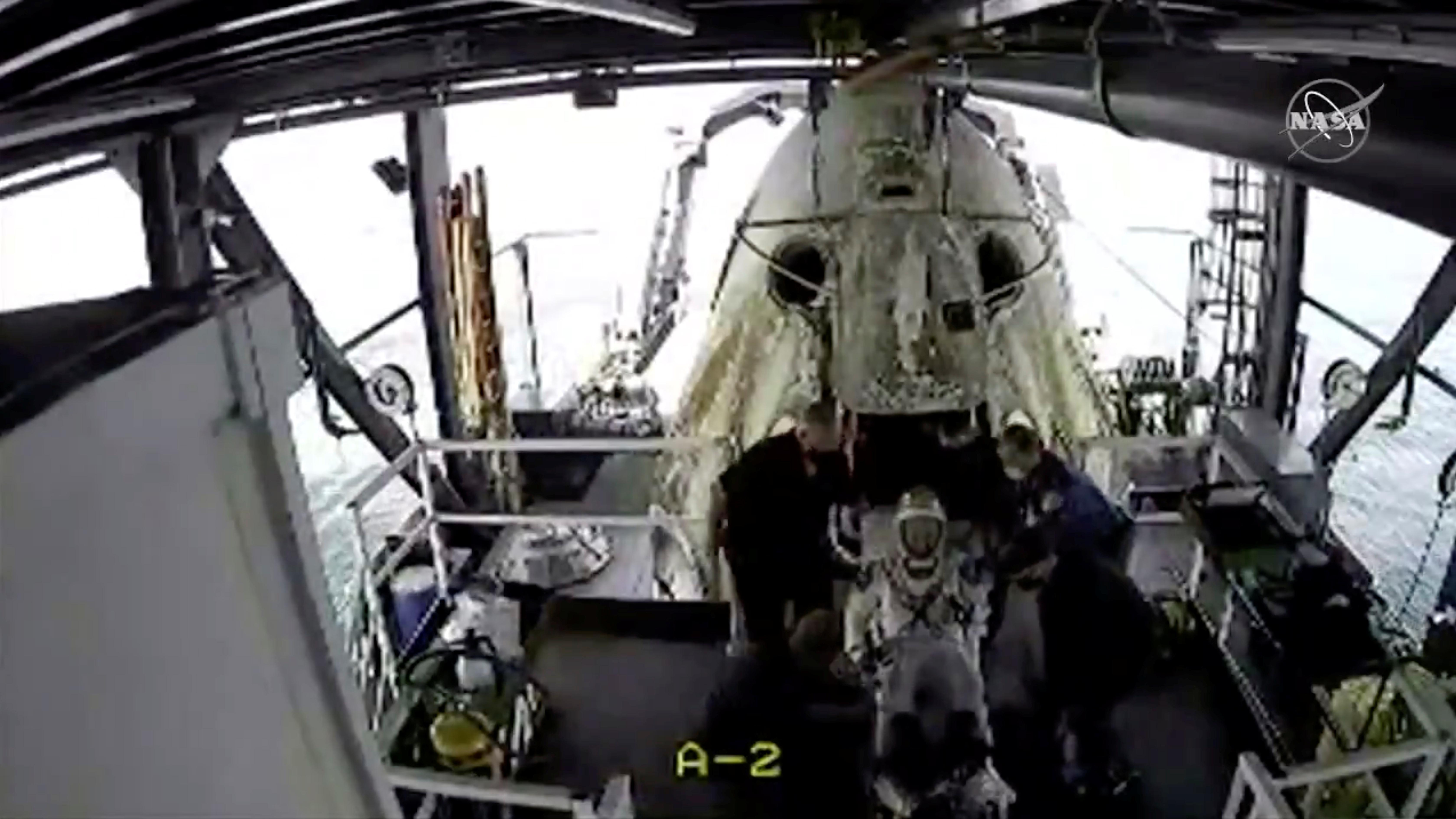 Behnken and Hurley brought the flag back to Earth, stowed as cargo in Crew Dragon.

The landmark mission, which took off from NASA’s Kennedy Space Center on May 31, marked the first time the U.S. space agency launched humans from American soil since its shuttle program retired in 2011. Since then the United States has relied on Russia’s space program to launch its astronauts to the space station.

“It was a great relief when I saw Bob and Doug come out of the capsule, smiling, thumbs up, looking very cheerful,” SpaceX president Gwynne Shotwell told reporters. “That was the good moment.”