Months after the inauguration of President Biden, One America News Network, a right-wing cable news channel available in some 35 million households, has continued to broadcast segments questioning the validity of the 2020 presidential election.

That segment was one in a spate of similar reports from a channel that has become a kind of Trump TV for the post-Trump age, an outlet whose reporting has aligned with the former president’s grievances at a time when he is barred from major social media platforms.

Some of OAN’s coverage has not had the full support of the staff. In interviews with 18 current and former OAN newsroom employees, 16 said the channel had broadcast reports that they considered misleading, inaccurate or untrue.

To go by much of OAN’s reporting, it is almost as if a transfer of power had never taken place. The channel did not broadcast live coverage of Mr. Biden’s swearing-in ceremony and Inaugural Address. Into April, news articles on the OAN website consistently referred to Donald J. Trump as “President Trump” and to President Biden as just “Joe Biden” or “Biden.” That practice is not followed by other news organizations, including the OAN competitor Newsmax, a conservative cable channel and news site.

OAN has also promoted the debunked theory that the rioters who stormed the Capitol on Jan. 6 were left-wing agitators. Toward the end of a March 4 news segment that described the attack as the work of “antifa” and “anti-Trump extremists” — and referred to the president as “Beijing Biden” — Mr. Sharp said, “History will show it was the Democrats, and not the Republicans, who called for this violence.” Investigations have found no evidence that people who identify with antifa, a loose collective of antifascist activists, were involved in the Capitol riot.

Charles Herring, the president of Herring Networks, the company that owns OAN, defended the reports casting doubt on the election. “Based on our investigations, voter irregularities clearly took place in the November 2020 election,” he said. “The real question is to what extent.”

Herring Networks was founded by Mr. Herring’s father, the tech entrepreneur Robert Herring, who at age 79 runs OAN with Charles and another son, Robert Jr. About 150 employees work for the channel at its headquarters in San Diego. 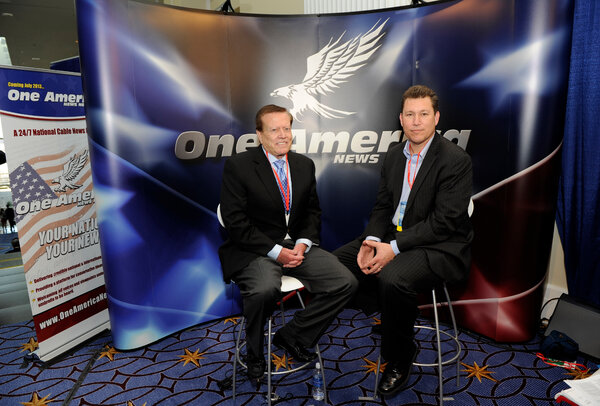 While OAN appeals to a relatively small audience, its coverage reflects views commonly held by Republicans. In a Reuters/Ipsos poll last month, about half of Republicans said they believed that the Jan. 6 attack, which left five dead, was largely a nonviolent protest or was the handiwork of left-wing activists. Six in 10 of Republicans surveyed said they also believed Mr. Trump’s claim that the election was “stolen.”

OAN, which started in 2013, gained attention when it broadcast Mr. Trump’s campaign speeches in full before the 2016 election. In recent months, it has courted viewers who may have felt abandoned by Fox News, which on election night was the first news outlet to project Mr. Biden as the winner of Arizona, a key swing state. In a mid-November promotional ad, OAN accused Fox News of joining “the mainstream media in censoring factual reporting.”

Marty Golingan, a producer at the channel since 2016, said OAN had changed in recent years. At the start of his employment, he said, it concentrated more on neutral coverage based on reports from The Associated Press or Reuters. He saw it as a scrappy upstart where he could produce cheeky feature stories, he said.

During the Trump presidency, it moved right, Mr. Golingan said. And when he was watching coverage of the pro-Trump mob breaking into the Capitol, he said, he worried that his work might have helped inspire the attack.

He added that he and others at OAN disagreed with much of the channel’s coverage. “The majority of people did not believe the voter fraud claims being run on the air,” Mr. Golingan said in an interview, referring to his colleagues.

He recalled seeing a photo of someone in the Capitol mob holding a flag emblazoned with the OAN logo. “I was like, OK, that’s not good,” Mr. Golingan said. “That’s what happens when people listen to us.”

Charles Herring defended OAN’s coverage. “A review process with multiple checks is in place to ensure that news reporting meets the company’s journalist standards,” he said. “And, yes, we’ve had our fair share of mistakes, but we do our best to keep them to a minimum and learn from our missteps.”

Mr. Golingan added that, since Inauguration Day, OAN’s news director, Lindsay Oakley, had reprimanded him for referring to Mr. Biden as “President Biden” in news copy. Ms. Oakley did not reply to requests for comment.

“OAN’s staff White House reporters use the term President Biden and then may use Mr. Biden,” Charles Herring said. “The term Biden or Biden administration may also be used.” He declined to reply to a question on the channel’s use of “President Trump” for Mr. Trump.

Allysia Britton, a news producer, said she was one of more than a dozen employees who had left OAN in the wake of the Capitol riot. She criticized some of what the channel had reported, saying it was not up to journalistic standards.

“Many people have raised concerns,” Ms. Britton said in an interview. “And the thing is, when people speak up about anything, you will get in trouble.”

Charles Herring confirmed that about a dozen OAN workers had left in recent months, saying many of them were not high-level employees.

Assignments that the elder Mr. Herring takes a special interest in are known among OAN staff as “H stories,” several current and former employees said. The day after Trump supporters stormed the Capitol, Mr. Herring instructed OAN employees in an email, which The New York Times reviewed, to “report all the things Antifa did yesterday.”

Some “H stories” are reported by Kristian Rouz, an OAN correspondent who had written for Sputnik, a site backed by the Russian government. In a report in May on the pandemic, Mr. Rouz said Covid-19 might have started as a “globalist conspiracy to establish sweeping population control,” one that had ties to Bill and Hillary Clinton, the billionaires George Soros and Bill Gates, and “the deep state.”

Ms. Britton, the former OAN producer, recalled checking a website that Mr. Rouz had cited to back some of his reporting. “It literally took me to this chat room where it’s just conservatives commenting toward each other,” she said.

In an email to staff last month, Ms. Oakley, the news director, warned producers against ignoring or playing down Mr. Rouz’s work. “His stories should be considered ‘H stories’ and treated as such,” she wrote in the email, which The Times reviewed. “These stories are often slugged and copy-edited by ME as per Mr. H’s instructions.”

OAN’s online audience is significant, with nearly 1.5 million subscribers to its YouTube channel. One of its most popular videos, with about 1.5 million views since it went online Nov. 24, criticized Dominion Voting Systems, the election technology company whose equipment was used in more than two dozen states last year, including several won by Mr. Trump. Hosted by the OAN White House correspondent, Chanel Rion, the video shows a man who said he had infiltrated Dominion and heard company executives say they would “make sure” Mr. Trump lost.

Dominion has sued Fox News and two of Mr. Trump’s lawyers, Rudolph W. Giuliani and Sidney Powell, accusing them of making or promoting defamatory claims. A lawyer for Dominion, who did not reply to requests for comment, has said the company is considering further legal action.

Mr. Golingan, the producer, said some OAN employees had hoped Dominion would sue the channel. “A lot of people said, ‘This is insane, and maybe if they sue us, we’ll stop putting stories like this out,’” he said.

Weeks after Dominion filed its first defamation suits, OAN broadcast a two-hour video in which the chief executive of MyPillow, Mike Lindell, made his case that widespread voter fraud had occurred. YouTube removed the video the day it was posted, saying it violated the platform’s election integrity policy. Last month, an OAN report described Dominion’s “voting machines” as “notorious.”

Two of the current and former employees interviewed for this article — Dan Ball, a talk-show host, and Neil W. McCabe, a former reporter — described OAN’s coverage as unbiased. Mr. McCabe, who now writes for The Tennessee Star, said the network gave a “voice to people that are just not covered.”