Spurred by recent social unrest, many U.S. companies are trying to make it easier for workers, and urging their customers, to cast their ballots. 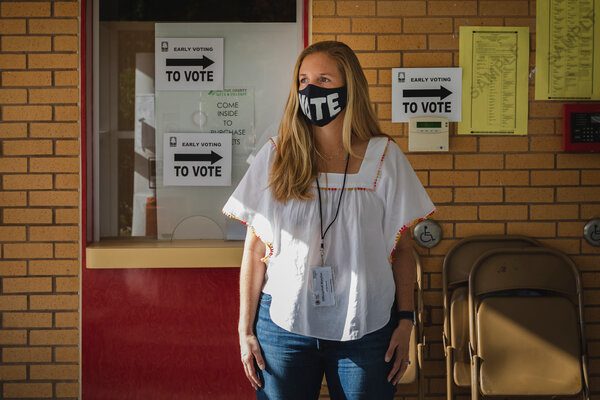 By Kate Kelly and Sapna Maheshwari

Bank of America is offering employees up to three hours of paid time to vote this year. The spirits company Diageo North America has declared a no-meeting day on Nov. 3. Best Buy is closing stores until noon that day, and PayPal is offering a half day, paid, to workers who volunteer at polling places.

Less than two weeks before the general election, corporate America is having a civic awakening, with thousands of companies encouraging voter participation by offering their workers paid time off, voter-education tools and interactive sessions on how elections work. Some are even providing marketing and free legal advice to local election boards or nonprofit get-out-the-vote groups.

“Companies can’t do everything, but we can function in civil society in a way that really helps to encourage and enable civic participation,” said Franz Paasche, head of corporate affairs at PayPal, where the efforts have varied from paid time off to hosting a speaker series on elections.

Two years ago, when executives from PayPal, Patagonia and Levi Strauss founded Time to Vote, a nonpartisan project that asks companies to encourage workers to participate in elections, there were around 400 members. In recent weeks, membership has shot up to more than 1,700. A similar initiative, called A Day for Democracy, has attracted more than 350 companies since it began with seven Boston-area companies in July. ElectionDay.org, sponsored by the nonprofit organization Vote.org, has gathered pledges from more than 800 companies promising employees paid time to vote.

Most companies are quick to say that their goal isn’t to wade into politics or get any particular candidate into office. Rather, many executives say that they were galvanized by recent upheavals that have put issues of race and gender discrimination, economic inequality, climate change and other topics at center stage for employees and customers, and voting is a way to take a stand.

“The Black Lives Matter and the civil unrest has been a call to arms for C.E.O.s in terms of informing corporate behaviors and civic actions,” said Peter Palandjian, a private-equity executive in Boston who started A Day for Democracy with commitments from the Red Sox and Bank of America. “And I think that’s what’s very different this year.”

Earlier this week, Goldman Sachs announced that it would give workers up to half a day off to vote, paid, for the first time. Other companies that have offered paid time to vote in the past, including Citi and Gap Inc.,have announced that they’re providing additional paid hours if needed as well as voter-education resources this year.

The extra hours are likely to be necessary given that a record turnout is expected this year, which could mean long lines and additional safety procedures in light of the pandemic. In anticipation, Diageo North America, which owns brands like Guinness and Smirnoff, is changing course and allowing employees to take whatever time they need to vote without a written request. Previously, employees were given up to two hours of paid time off to vote, which they had to request in advance. The company also plans to set up a team for workers to call if they run into any trouble casting their ballots, said Laura Watt, its executive vice president of human resources.

Some companies are hoping to encourage voter turnout in general. Shake Shack is giving away free french fries to customers who vote early. Tory Burch, the clothing label, designed a T-shirt that reads “VOTE,” the proceeds from which go to a nonpartisan get-out-the-vote project called I Am a Voter. Coca-Cola dispatched a team of marketers to create public-service announcements on the importance of early, in-person voting that ran on radio, television and at bus shelters around its home state of Georgia; broadcast spots featured the voices of Ed Bastian, chief executive of Delta, the Atlanta Hawks forward Cam Reddish and other local celebrities.

Corley Kenna, who runs communications at Patagonia and co-founded Time to Vote, took advantage of additional benefits her employer is providing this year to work at election sites in Atlanta, her hometown, with two colleagues. Between morning and afternoon shifts at the State Farm Arena and the Southwest Arts Center this month, she caught up on work.

“I think it is on all of us — the private sector, nonprofit, academia — to help provide safe and secure elections,” said Ms. Kenna, a Democrat and environmental advocate who was a senior adviser in the State Department under President Obama. 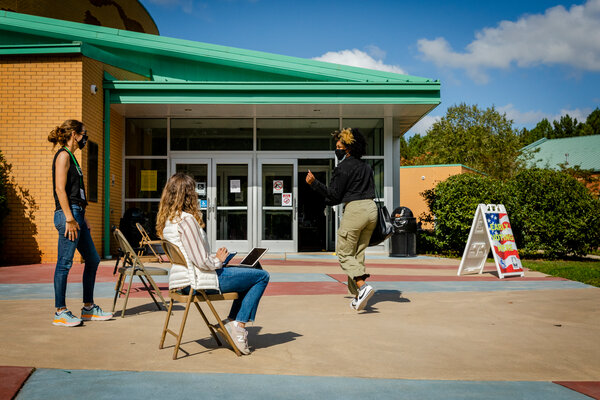 Old Navy, the biggest brand owned by Gap, said it would pay employees to be poll workers, on top of what they get paid by county election commissions. The retailer said it hoped its policy would fuel voter turnout among its young store staff, more than 60 percent of whom are between the ages of 18 and 29. Levi’s extended its paid time off for voting to poll worker training this year and has been featuring environmental and racial justice activists on its Instagram account to talk about voting.

The push by retailers and restaurant chains is significant because it can be especially difficult for hourly workers to find time to vote. After health care, retail is the second-biggest private sector employer in the United States.

In addition to making sure that their efforts are not being seen as partisan externally, companies have been careful about how they communicate internally. Diageo North America has been holding weekly events in the run-up to the election with the African heritage group and women’s network, for example, discussing the issues at stake for their communities, but in a “neutral way,” Ms. Watt said. “We’ve been very clear about not being partisan or not having a particular view leaning one way or another,” she said.

At PayPal, dozens of employees have participated in PayPal Votes, a multipronged internal effort that directs people to polling sites and other voter information and sponsors an election newsletter and guest speakers. A Sept. 10 interview with Alex Padilla, the California secretary of state, on voting procedures drew 600 participants.

Still, not every company is being so proactive. Workers at Amazon, who have been pushing unsuccessfully for a paid day off to vote, are threatening to shut down warehouses temporarily on Oct. 31 if the e-commerce giant doesn’t meet their demands. And on Thursday, Vote.org, a digital platform that helps people register to vote online and provides information about polling sites, called on more than two dozen companies that have not yet committed to giving workers time off to do so. It cited Pew Research Center statistics from 2014 showing that in the past, 35 percent of registered voters didn’t vote because of work or school conflicts.

Tory Burch, which employs nearly 3,000 people in the United States, was one of the few companies offering employees paid time off to vote in 2016, when its founder wrote an op-ed encouraging other company bosses to do the same. At the time, fellow chief executives, some from Fortune 500 companies, told Ms. Burch that they couldn’t follow suit because doing so would be regarded as a partisan act, intended to favor Democratic candidates.

The feedback was “eye opening,” Ms. Burch recalled, given that “encouraging Americans to use their vote is patriotic and not a Democratic initiative.” This year, she is closing all stores and offices on Nov. 3 and encouraging her staff to volunteer as poll workers, believing that the employee good will it generates far outweighs the lost revenue.

In a note to employees Thursday morning reminding them of their options to take paid time off to vote, Jamie Dimon, the chief executive of JPMorgan Chase, talked about the importance of a smooth political process.

“The peaceful and stable transition of power — whether it is to the second administration of a president or a new one — is a hallmark of America’s 244-year history as an independent nation,” Mr. Dimon wrote, adding that while he acknowledges the “tremendous passion and strong opinions” that have played into the current race, respecting the democratic process “is paramount.”