“I was absolutely horrified and I actually felt quite violated”.

That’s how Sally Giles describes the moment she discovered she’d been charged £4.50 each week, every week for more than five years “without [her] knowledge or permission”.

The charge – which totalled more than £1,200 – was added to her phone bill by her provider, EE, allowing her to take part in a competition run by Xinion, owned by BMCM Group.

Xinion says Sally signed up to their service in July 2015.

“They haven’t given me any proof whatsoever that I signed up. They insist I must have gone onto a website and entered my phone number. I have never, ever done that. I would never do something like that.”

Sally says she only found out about the charge when she called her provider about a different query in September 2020 – and the adviser asked her if she knew about this weekly charge she’d been paying for so many years.

“The proof is I have never played the game, why would I pay £4.50 a week and never play the game?”

Sally says she did occasionally check her phone bill, but the extra charges weren’t clearly defined so she assumed they were charity donations she made or when she bought more data.

Xinion did send Sally a text each week though asking her a competition question which also explained she was being charged, but she just thought it was a spam text message.

“You have to open the text to see you’re being charged,” she says. “I don’t open texts from unknown sources for obvious reasons because that’s what you’re told all the time. ‘Do not click on links you don’t recognise, just delete it straight away’.

“When I realised what was happening I opened [the text] and at the bottom, right at the bottom, if you scroll down it says you are being charged £4.50. But as I say you have to open the text to see it.”

“People who are tricked into, or who unwittingly sign up to a contract, are not bound by the terms of that contract. That’s basic consumer law. People have to know what they’re getting into.

“The burden of proof always rests with the third party service provider to show that consumers knowingly signed up.

“For example, if someone has never once taken part in one of these text message competitions but has been charged, the likelihood is if it ever got to court they would be able to get their money back by showing they didn’t even know they’d been signed up.” 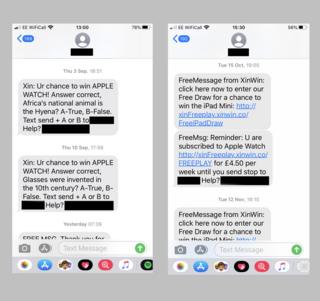 After finding out what happened Sally got in touch with the company involved, Xinion, explained her situation and asked for her money back. It refused.

Then she got in touch with the regulator, the Phone Paid Services Authority, or PSA. “When I rang them originally I got a very lackadaisical reply saying we’ll look into it saying it might take months or even a year. I personally don’t think that’s good enough. It’s time the PSA got their act together.”

The next step was the small claims court, but before that Sally got in touch with Money Box.

We started digging and discovered there have been thousands of complaints to the regulator about these types of charges over the last few years.

We also heard from Sally’s mobile phone provider, EE. It told us it had been in touch with Xinion and that as a gesture of goodwill Xinion had changed its mind and decided to refund Sally after all.

The PSA said no-one was available for an interview but instead told us how it tightened up regulations on these subscription services last November and since then the number of complaints has dramatically reduced.

However, the new regulations do not apply retrospectively, so people who may have found themselves signed up to similar “competitions” before the changes came into effect haven’t got that extra protection.

We never heard back from Xinion, but EE said it’s toughened up its own procedures on these subscription services including making customers’ bills clearer, going above and beyond what the regulator requires.