The two companies are the latest targets of labor action by groups fearing virus exposure on the job. 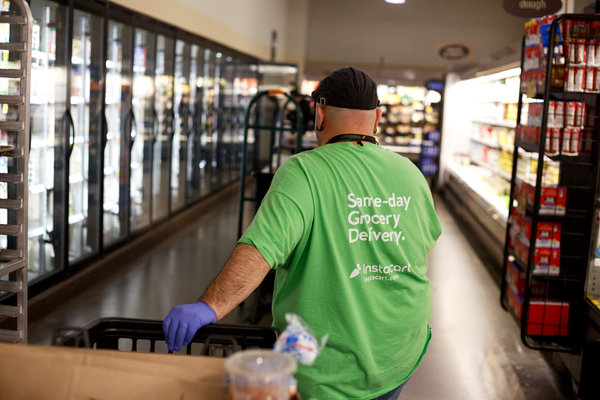 By Noam Scheiber and Kate Conger

Signaling both growing anxiety and growing solidarity brought on by the coronavirus pandemic, workers in a variety of occupations across the country are protesting what they see as inadequate safety measures and insufficient pay for the risks they are confronting.

On Monday, a contingent of workers who fulfill orders for the grocery delivery service Instacart stayed off the job, demanding greater pay and better access to paid leave and disinfectant.

A group of workers walked off the job at an Amazon warehouse in Staten Island on Monday, and a sickout called by Whole Foods Market workers is set for Tuesday. Last week, nurses in the Bronx protested a lack of protective equipment, and sanitation employees in Pittsburgh staged a protest over working conditions.

Labor experts and union organizers said anxieties related to the pandemic appeared to be widely shared among front-line workers across different companies, job categories and classifications. “Whether they’re an employee of a grocery store, or in this case an Instacart worker, they all have the same concerns,” said Bob O’Toole, the president of United Food and Commercial Workers Local 1546 in Chicago, which represents about 19,000 workers in the grocery, meatpacking and food-processing industries. The union has organized some Instacart workers and is trying to enlist more.

Instacart is a service that allows customers to order groceries from stores for delivery. Some of its workers are employees and are stationed within participating stores, where they fulfill orders. Others are independent contractors who drive the filled orders to customers. These contractors sometimes fulfill orders when Instacart employees are not available before driving them to the customer.

Though the size of the Instacart walkout was unclear, organizers said they believed that thousands of the company’s 200,000 workers were refusing to report to the job. They hoped to pressure the company by adding to an order backlog as locked-down Americans increasingly get staples delivered rather than venture out.

But the company denied any effect from the action. “We’ve seen absolutely no impact to Instacart’s operations,” a company representative said, adding that there were 40 percent more people working to fulfill orders — or as Instacart calls them, shoppers — compared with the comparable period a week earlier.

In a post on Friday, a group called the Gig Workers Collective, which organized the strike, said workers were walking off the job until Instacart provided them with more protective material like hand sanitizer and disinfectant wipes, an extra $5 per order as hazard pay and an increase in the default tip to 10 percent of the order from 5 percent. The workers are also seeking an expansion of sick pay — currently limited to workers with a Covid-19 diagnosis — to include anyone with a doctor’s note urging them not to be on the job.