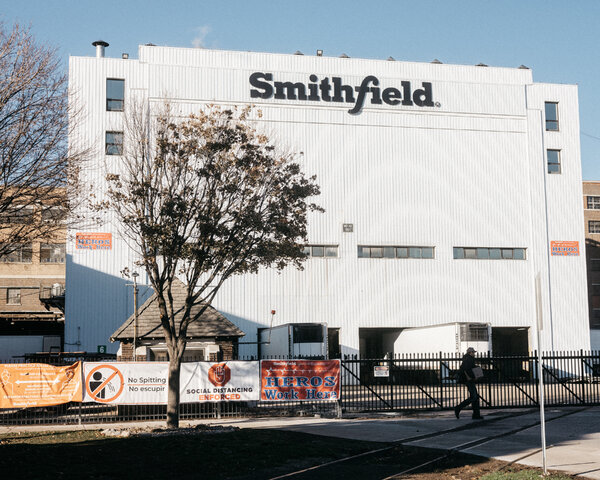 Smithfield Foods was one of the first companies to warn that the country was in danger of running out of meat as coronavirus infections ripped through processing plants in April 2020 and health officials pressured the industry to halt some production to protect workers.

The suit says the nation was never in danger of running out of meat. It claims there were ample supplies in cold storage, while at the same time pork exports to China, in particular, were surging. The suit was filed in Superior Court in Washington, where a law allows a nonprofit group to sue on behalf of consumers without needing to show that they suffered direct harm.

“This fear mongering creates a revenue-generating feedback loop,” Food and Water Watch said in its lawsuit. “It stokes and exploits consumer panic — juicing demand and sales — and in turn, provides the company with a false justification to keep its slaughterhouses operating at full tilt, subjecting its workers to unsafe workplace health and safety conditions that have caused thousands of Smithfield workers to contract the virus.”

Smithfield defended its safety efforts while criticizing the consumer advocacy group. “The advocacy organizations who make these claims have a stated goal of dismantling the efforts of our hard-working employees, who take great pride in safely producing food products,” Keira Lombardo, Smithfield’s chief administrative officer, said in a statement.

The meatpacking industry was a flash point during the pandemic as thousands of workers fell ill, many of them fatally. Smithfield and other companies mounted an aggressive advertising campaign to highlight their worker safety efforts and to emphasize the industry’s important role in feeding the nation.

Despite these assertions, Food and Water Watch, which is represented in its lawsuit by Public Justice, a legal advocacy group, points out that Smithfield was cited by regulators for failing to adequately protect workers at its plants in California and South Dakota.

In her statement, Ms. Lombardo said, “Our health and safety measures, guided by medical and workplace safety expertise, have been comprehensive.”