States and cities are being given broad discretion on how they can use the money, which is intended to replace public sector revenue, provide extra pay for essential workers, and invest in sewer, water and broadband. 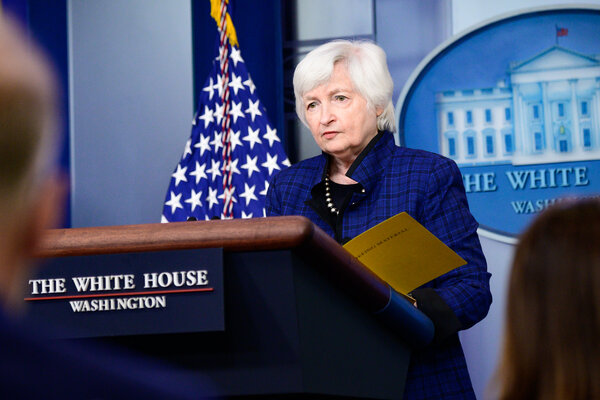 The Biden administration will begin deploying $350 billion in aid to state and local governments this month, a significant step in its effort to shore up segments of the economy that have been hardest hit by the pandemic, White House and Treasury officials said on Monday.

The infusion of funds also marks the Biden administration’s most significant opportunity to date to start reviving infrastructure across the nation and to fulfill its goal of ensuring a more equitable recovery.

“With this funding, communities hit hard by Covid-19 will able to return to a semblance of normalcy. They’ll be able to rehire teachers, firefighters and other essential workers — and to help small businesses reopen safely,” Treasury Secretary Janet L. Yellen said in a statement.

The details of the disbursement have been eagerly awaited by the states, cities, territories and tribal governments that are expected to receive money. But several Republican-led states and the Biden administration are in a legal confrontation over whether states can cut taxes after taking relief money and using it to solidify their budgets.

The Treasury Department is expected to publish more formal guidance on this question later on Monday. However, in a fact sheet accompanying the announcement about the distribution on Monday, it made clear that the relief money cannot be used to subsidize tax cuts directly or indirectly.

“The American Rescue Plan ensures that funds needed to provide vital services and support public employees, small businesses and families struggling to make it through the pandemic are not used to fund reductions in net tax revenue,” the Treasury Department said. “If the funds provided have been used to offset tax cuts, the amount used for this purpose must be paid back to the Treasury.”

Treasury and White House officials made clear that they will scrutinize how the funds are being used to ensure that they budgets are not being gamed to violate the intent of the law. The Treasury Department’s new recovery office will coordinate with states to help determine if their policies are in line with conditions set forth in the law.

A White House official would not comment on whether initiatives such as Montana’s return-to-work bonuses could be funded using relief money.

States and cities are being given broad discretion on how they can use the money, which is intended to replace public sector revenue that was lost during the pandemic; provide extra pay for essential workers; and invest in sewer, water and broadband infrastructure.

The allocation of the funds is also likely to be a contentious matter as the money starts to flow. Some states have complained that states that managed the pandemic well are essentially being penalized because the formula for awarding aid is based on state unemployment rates.

The Treasury Department said on Monday that the states that were hardest hit economically by the pandemic will also get their money faster.

Local governments will generally receive half the money this May and the rest next year. But states that currently have a net increase in unemployment of more than 2 percentage points since February 2020 will get the funds in a lump sum right away.