A downtown New York crowd is pushing back against the homogenization of big social media.

The Drunken Canal “wouldn’t be what it is if we weren’t two girls who want to have fun,” one of its editors said.Credit…Brian Finke for The New York Times

Honor Levy, 23, with a piece of fiction published on The New Yorker’s website and a short story collection coming out next year, was regretting her decision to pull her piece from The Drunken Canal as we walked last Thursday past the publication’s unmarked white newspaper box in Lower Manhattan. But her friend and editor, Claire Banse, also 23, had told her the paper had already hit its quota on the word “retarded” and she’d objected. (What else rhymes with “departed”?) Now, her short story wouldn’t appear in the fifth and largest issue of the paper, whose mystique would only be enlarged by the fact that Ms. Banse’s co-editor, Michelle Guterman, who goes by “Gutes,” had closed the issue while experiencing Covid-19 symptoms.

“Maybe Gutes will die of Covid and it’ll be ‘Gutes Cobain’ and she’ll be legendary,” Ms. Levy mused. 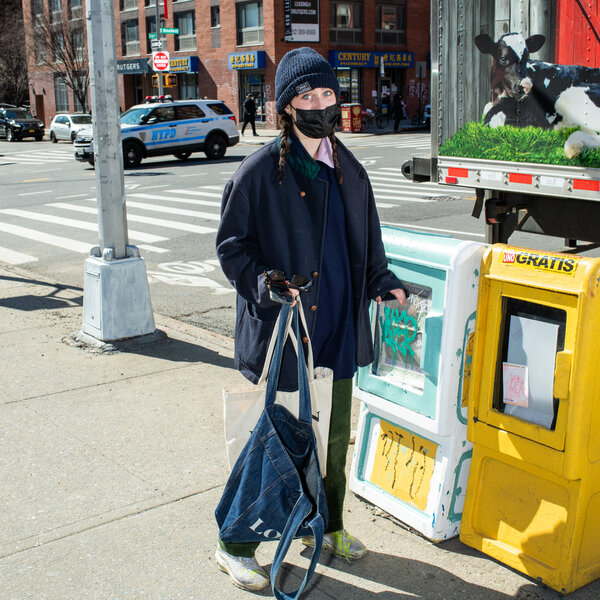 The next morning, Ms. Banse turned up alone at 11 a.m. to deliver a stack of about 100 newspapers — they’d printed 1,000 — to the box where Canal Street ends at Seward Park. Only her eyes and pigtails were visible behind a giant mask. About a dozen young people who had been lingering nearby swooped in, many taking several free copies, and all were gone before noon.

The newspaper’s 28 uneven and sometimes inspired pages are a blend of inside jokes, vaccine quizzes, occasionally turgid prose and advice for having sex on the club drug ketamine. The newspaper started as a kind of a joke for Ms. Guterman’s and Ms. Banse’s friends around the triangle known as “Dimes Square,” which gets its name from the restaurant Dimes, which is owned by two models. (The name refers to how hot its customers are — they’re all 10s.) Ms. Guterman, a recent graduate of the New School, and Ms. Banse, of New York University, are now in the awkward position of having put enough work into the paper — and created buzz in magazines like New York and Interview — that it no longer feels like a prank and they’re losing their sense of humor about typos.

“The Canal wouldn’t be what it is if we weren’t two girls who want to have fun,” Ms. Banse said in a Zoom interview last week as Ms. Guterman, feeling a bit better and wearing an “I’M PUTIN” T-shirt and pearls, nodded. “But the way it’s being portrayed sometimes is a little demeaning.”

Every story in New York is also, to some degree, a story about real estate. The latest iteration of the downtown media scene is at least in part about falling rents that (combined, at times, with their parents’ money) have brought a crowd of young people back from Brooklyn to Manhattan, where they are pretty much hanging out together all the time, pandemic or no. They inspired, in turn, the envy of an older generation of journalists who spent the year going stir-crazy on social media. And while the phrase “the New York media” means, for many people, earnest young people debating politics on Twitter, those voices now face their own local insurgency from a group of people more interested in having fun, looking cool and promoting their friends than in delineating moral and ethical rules.

Parts of that new scene are “white and not necessarily straight and rich and young and happy,” said Dean Kissick, a columnist for the art magazine Spike. “It’s a very unusual proposition, and people seem to go for it.”

That is, of course, in line with the eternal New York tradition of downtown media. So is attacking whatever the establishment media holds dearest and relishing the attention, while that establishment — particularly glossies like New York magazine, which has covered the scene, and GQ, where a couple of the scene’s prominent members work — decides how much of the backlash it can safely co-opt.

The Drunken Canal is one of a handful of downtown media projects that have been sprouting in reaction to the dominance of giant online media, the homogenization of big social media platforms that make community feel global, not local (though they’d like it if you’d follow them on Instagram), and the overwhelming sense that nobody in media was having fun in the grim year of 2020. The Dimes Square local media include a pirate radio station, Montez Press Radio, that won’t let you listen on demand, and a “natural style” fashion email newsletter, Opulent Tips, written by a GQ staff writer, with no fancy formatting. Many of the most interesting new products are in print “because digital spaces are becoming increasingly more policed,” said Richard Turley, 44, the former creative director of Bloomberg Businessweek who founded another downtown newspaper, Civilization, in 2018.

The Dimes Square scene caught my eye because its privileged denizens embody a broader shift toward spaces safe from social media. The new Silicon Valley social audio app Clubhouse shares some of those values. And the choice of print has a political edge. The Canal’s first issue featured a “Sorry to hear you’ve been canceled” column composed of a list of names, with no explanation, “to keep you from looking foolish at a woke gathering.” (The second issue included an apology to the actor Terry Crews, whose name had been spelled wrong in the first issue and who had, in fact, not been canceled, in the publishers’ view.) A third recent newsprint project called The New Now, created by a co-founder of the magazine Paper, announces atop its front page that it is “Free of Charge” “Free of Advertising” and “Free of the internet.”

The downtown media rebellion often looks back to the 1990s, when the model and actress Chloë Sevigny embodied an edgy new scene in a New Yorker profile, just before her star turn in the explicit 1995 movie “Kids.” Ms. Sevigny, now 46, is a running preoccupation — The Drunken Canal has featured her stylist, Haley Wollens. Ms. Sevigny told me she’s “flattered and hoping the kids rally for all of us.” But the more recent seeds of the current scene are in the podcasts that helped put a strain of left-wing populist politics that’s as hostile to Hillary Clinton as it is to Donald Trump on the political map — in particular, one called Red Scare, whose co-host, Dasha Nekrasova, lives near Dimes Square. Ms. Nekrasova, 30, said she admired the spirit of The Drunken Canal although, like many of its admirers, she hasn’t actually been able to get her hands on a copy. She plays a crisis P.R. person in the upcoming season of “Succession” and has directed a new feature film rooted in theories about Jeffrey Epstein’s death. The new Drunken Canal includes the prediction that “DASHA will become the new and better Chloë Sevigny.”

The unsafe sex of “Kids” scandalized 1990s New York, but the best way to get a reaction from the 2020 New York media was by bragging about having indoor parties. The writer and publicist Kaitlin Phillips, 30, who occupies a spot close to the center of a map of downtown personalities, became mildly notorious on Twitter for advertising a blasé attitude through the worst of the pandemic last spring.

Ms. Phillips’s friends “said we should hide our partying out of respect for the Covid scolds,” she writes in the new issue of Civilization. “I think you could say I was serving our country too; by breaking quarantine they could focus all their hatred and helplessness on me, and not the futility of modern American life.”

Before Christmas, she tweeted that she was borrowing chairs from Lucien, the restaurant on First Avenue where the Dimes Square crowd crosses paths with more established figures like Ms. Sevigny or Bella and Gigi Hadid. Ms. Phillips had a dozen or so friends over to her small apartment, including the Tony Award-winning millennial playwright Jeremy O. Harris, who had just arrived from London, the actress and model Hari Nef and the editor of Artforum, David Velasco. When she posted their maskless photographs to Instagram, they circulated angrily through New York media.

Let Us Help You Better Understand the Coronavirus