The longstanding alliance between big business and the Republican Party is being tested like never before.

As President Trump and his allies sought to overturn the election results in recent months, chief executives condemned their efforts and called on the G.O.P. to stop meddling with the peaceful transfer of power.

Now, in the aftermath of the deadly Capitol rampage by Mr. Trump’s supporters, corporate America is turning its back on many senior Republicans, and flexing its political muscle.

One major trade group called on Mr. Trump’s cabinet to consider removing him from office. Dozens of companies, from AT&T to Walmart, have said they will no longer donate to members of Congress who opposed the Electoral College certification of President-elect Joseph R. Biden Jr.

And a senior House Democrat on Friday asked big banks and other financial services companies to stop processing financial transactions for people and organizations that participated in the Capitol riot.

Tim Ryan, the chief executive of PWC, who said his firm was among those suspending donations to members who voted against certification, called for the country to come together. “I believe this is the best country in the world, and we can’t let all that go to hell in a handbasket,” he said. “We need to stabilize. We need certainty.”

He added, “If we can’t come together, can’t stabilize, or if it got worse, it wouldn’t be good for business.”

The proclamations of chief executives might not normally matter much in political discourse, and there are some who are skeptical that their motives represent anything beyond self-interest. But in a fractured moment, the unified voice of the mainstream business world carries a great deal of symbolic heft.

A recent study by Edelman found that the public trusts business more than nonprofit organizations, the government or the media. 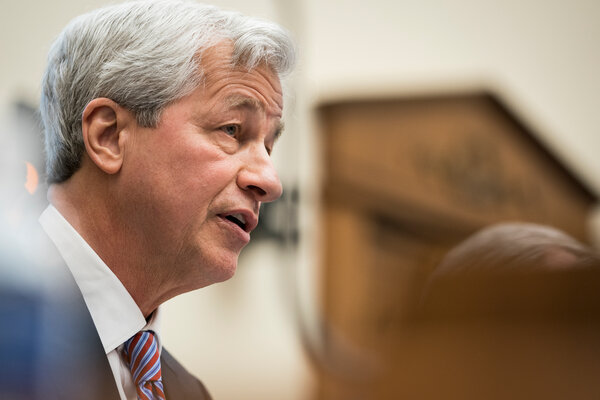 “They’re not just the money,” said Nancy Koehn, a historian at Harvard Business School. “They’re also this collective seal of approval. They carry an enormous amount of weight, regardless of your political loyalties.”

For decades, the Republicans were seen as the party of big business. Their support for low taxes and light regulation was manna to executives eager to raise profits and avoid government entanglements, and chief executives and big companies were reliable funders of Republicans up and down the ballot.

Mr. Trump has frayed those bonds. Four years ago, few major chief executives supported Mr. Trump during his first campaign. And throughout his time in the White House, executives from many of the company’s biggest brands publicly sparred with the president on everything from gun control to climate change to immigration.

“I can’t remember a time when the business community has spoken out so strongly in opposition to an administration on so many important issues,” said Rich Lesser, chief executive of Boston Consulting Group.

“It’s not just a break with Trump, but potentially with the Republican Party,” said Richard Edelman, chief executive of the global corporate communications firm Edelman. “It’s not OK what’s going on in America, and business people are going to hold you to account.”

Even as they objected to some of Mr. Trump’s stances, however, business leaders continued to take seats at the table, working with the Trump administration on issues including taxes and trade policy.

But last week seemed to be a breaking point. Big business could evidently tolerate working with Mr. Trump despite his chauvinism, his flirtations with white nationalism and his claims of impunity, but the president’s apparent willingness to undermine democracy itself appeared to be a step too far.

“This thing was a little different. I mean, we had sedition and insurrection in D.C.,” said Jamie Dimon, the chief executive of JPMorgan Chase. “No C.E.O. I know condones that in any way shape or form. We shouldn’t have someone, you know, gassing up a mob.”

The fallout has been swift. After the president exhorted his supporters to march on the Capitol, chief executives used their strongest language to date to repudiate Mr. Trump, and some of his longtime allies have walked away. Ken Langone, the billionaire co-founder of Home Depot and an ardent supporter of the president, renounced Mr. Trump, telling CNBC, “I feel betrayed.”

Twitter, Facebook and YouTube have banned or suspended Mr. Trump’s accounts. Amazon, Apple and Google have cut ties with Parler, a messaging app popular among his supporters.

Charles Schwab, the brokerage firm founded by a Republican who supported Mr. Trump, said it would shut down its political action committee altogether. And many companies, along with the U.S. Chamber of Commerce, have sought to punish Mr. Trump’s supporters in Congress by depriving them of crucial funds.

“For those members of Congress that were involved in helping to incite the riot, and support the riot, there’s going to be consequences, no question about it,” said Ed Bastian, chief executive of Delta Air Lines.

That amounts to 147 members, or more than half of Republicans in Congress, including Senators Ted Cruz and Josh Hawley, and the House minority leader, Kevin McCarthy.

Corporate giving represents a small but important part of overall campaign contributions. Company PACs gave $91 million to members of the House of Representatives in the last election cycle, accounting for 8 percent of that chamber’s total funds raised, according to figures compiled by the Center for Responsive Politics. In the Senate, the figure was smaller, accounting for just 3 percent of donations.

The riot inside the U.S. Capitol on Wednesday, Jan. 6, followed a rally at which President Trump made an inflammatory speech to his supporters, questioning the results of the election. Here’s a look at what happened and the ongoing fallout: