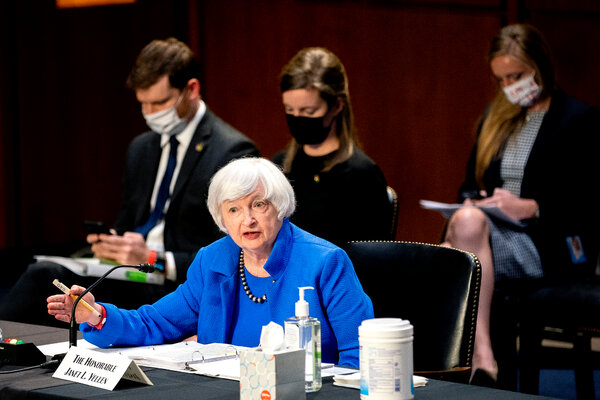 Yesterday’s market plunge seemed to suggest that investors, after months of ignoring the fight over raising the debt ceiling, were suddenly taking the once-unthinkable possibility of a U.S. debt default seriously. Treasury Secretary Janet Yellen warned lawmakers at a Senate hearing of “catastrophic” consequences if they failed to suspend or raise the debt limit before the government hit it, which the Treasury estimated could come as soon as Oct. 18.

This isn’t the first time the government has flirted with the debt ceiling, an artificially imposed borrowing limit that Congress used to raise routinely, but that in recent years has become a partisan cudgel. Nor is it the most immediate economic threat coming out of Washington. A government shutdown, which could happen as early as Friday, would furlough federal workers and disrupt other government services.

But a potential government debt default is what particularly worries market watchers. Here are two of the main scenarios being discussed on Wall Street as the debt ceiling closes in.

The “short-term panic” scenario. A brush with a ceiling-induced default in 2011, the first in a while, riled markets and led many to predict that the U.S.’s ability to borrow would be permanently affected: Standard & Poor’s downgraded the country’s credit rating for the first time in 70 years. (A decade later, interest rates are lower than ever.) Similarly, in 2013, during another debt-ceiling standoff, short-term government borrowing rates shot up, but quickly fell back to where they were before once the debt ceiling was raised. In both cases, the broader economy — jobs, house prices and the like — over time brushed off the temporarily higher borrowing costs.

Yellen’s “catastrophic” scenario. A prolonged standoff could result in something a lot worse than what happened in 2011 or 2013. The main problem: Treasuries are widely used as collateral to back up short-term loans. If the U.S. defaults on some of its bonds, lenders may be unwilling to accept those tainted securities as collateral. Worse, Wall Street’s trading systems have not really been set up to sort defaulted Treasuries from the rest, because few thought a U.S. default was possible. This could lead to a short-term lending market that grinds to a halt, like at the beginning of the financial crisis.

Investors appear to have regained a measure of confidence today, with stock futures up and bond yields falling. It could be a sign that investors are betting on the first scenario — yet another episode of debt-ceiling brinkmanship that is eventually resolved before things tip over the edge. What do you think? Let us know at [email protected] Include your name and location and we may feature your response in a future newsletter.

United says its Covid vaccine mandate is working. More than 99 percent of the airline’s U.S.-based employees have met the firm’s vaccination requirement or have applied for a religious or medical exemption. In an internal memo, the airline also said that nearly 600 workers who haven’t yet complied with the policy could be fired.

Senator Elizabeth Warren calls the Fed chair a “dangerous man.” The Democrat of Massachusetts said during Jay Powell’s appearance before the Senate Banking Committee that when his term as head of the central bank ends next year, she would not support his renomination. Warren and other progressives oppose reappointing Powell because of his track record on financial regulation. The White House hasn’t hinted what it will do when his term is up.

Mastercard gets into the buy-now, pay-later market. The card giant announced plans for new services in the industry that offer shoppers interest-free installment payments. The pay-later industry, which accounts for around a fifth of sales in Germany and in Sweden, accounts for only around 2 percent of sales in the U.S. but is expected to triple in the next three years.

Ozy’s board begins an internal investigation. The digital media company has hired a law firm to investigate its “business activities” and requested that Samir Rao, its chief operating officer, take a leave of absence. A Times report this week revealed that Rao had impersonated a YouTube executive during a conference call with Goldman Sachs as Ozy tried to raise money from the bank.

Warby Parker is set to go public today, in a direct listing that could value the trendy eyewear retailer at about $5 billion. Warby is one of a number of direct-to-consumer brands, like AllBirds and Fabletics, set to make market debuts in the coming months. The companies aim to take advantage of sky-high valuations for tech companies and strong interest in consumer names. DealBook spoke with Neil Blumenthal and Dave Gilboa, Warby’s co-founders and chief executives, about how the brand got here and what comes next.

On growth during a pandemic.

Warby’s sales grew 6 percent in 2020, beating rivals like the Ray-Ban parent EssilorLuxottica, which saw sales fall by double digits over the same period. Warby’s mix of online and in-store sales “enabled us to take market share, even during the year that we were hobbled,” Blumenthal said. But that came at a cost: The company’s marketing spend jumped to 19 percent of sales in 2020 from 13 percent the previous year.

On marrying a digital-first business with a growing offline retail presence.

Warby was one of the first brands born online that sought to combine the brand awareness that comes from stores with the reach of digital sales. (It was founded in 2010, opened its first dedicated store in 2013 and now has 145 retail outlets, with plans to open more.) Warby generated about two-thirds of its revenue in stores before the pandemic, but the mix of offline and online sales is now closer to 50-50 because of various restrictions. As for the ideal mix, the company is “channel agnostic,” Gilboa said.

On the flurry of direct-to-consumer brands going public.

“Clearly, a lot of companies that have raised money are looking to access a broader investor base,” Blumenthal said, seeking to distinguish Warby — whose direct listing won’t raise new funds — from others. So far this year, 12 internet retail companies have gone public, compared with nine last year, according to Renaissance Capital. Performance of these and related retail names have been mixed: Shares of Honest Company, Jessica Alba’s wellness brand, are down 53 percent since listing, while Figs, the upmarket scrubs company, is up 29 percent.

► “The term ‘paradigm shift’ is always overused, so people tend to ignore it. But that’s a good way of describing what’s happening right now.”

— Leland Miller, the head of the consulting firm China Beige Book, on how the struggles of the property developer Evergrande reveal “the beginning of the end of China’s growth model as we know it.”

— Marc Benioff, the C.E.O. of Salesforce, on how many, if not most, of the company’s employees may continue working from home after the pandemic.

► “I had builders and developers explaining to me how it’s not possible to get concrete to do that, even as I walked them up to our 3-D-printed house. Now our biggest challenge is we’ve just got to make more printers.”

— Jason Ballard, the head of Icon, a construction technology company that has delivered more than two dozen 3-D-printed homes across the U.S. and Mexico.

Isaac Perlmutter, the billionaire chairman of Marvel Entertainment, has been in an epic dispute with Harold Peerenboom, a neighbor in Palm Beach, Fla., for about a decade. It began with a disagreement over tennis courts and devolved into an eight-year libel case brought by Peerenboom against Perlmutter, claiming that the Marvel executive was behind a hate mail campaign against Peerenboom in retaliation. An envelope with traces of DNA from Mr. Perlmutter’s wife was cited as evidence linking the couple to the letters.

This week, a judge dismissed the lawsuit. The hate mail campaign turned out to be the work of a former employee of Peerenboom’s, according to the judge’s order. The DNA was apparently lifted at a deposition attended by the Perlmutters. “It was like an episode of ‘Curb Your Enthusiasm’ gone off the rails,” Josh Dubin, a lawyer for the Perlmutters, told DealBook. “But it’s a cautionary tale.”

The case is bigger than Palm Beach. Dubin, who runs a legal consulting firm and is an ambassador for the Innocence Project, a criminal justice initiative that works on clearing wrongful convictions, is steeped in the intricacies of DNA evidence. After his legal ordeal, Mr. Perlmutter became a criminal justice reform advocate, according to his lawyer. (In other legal news, House Democrats this week accused Mr. Perlmutter of breaking federal transparency laws.)

The fight isn’t over. The Perlmutters’ counterarguments against Peerenboom, claiming injury related to DNA theft, are proceeding. “This is a very wealthy white man who had the means to fight back,” Dubin said. Mr. Perlmutter has donated about $550,000 to criminal justice reform in the past 18 months, Dubin added. He and Dubin also met with former President Donald Trump to push for the pardon of Jawad Musa, whose sentence of life in prison for a nonviolent drug offense was commuted on Trump’s final day in office.

Evergrande will sell its stake in a commercial bank for $1.5 billion as it tries to raise funds to service its $300 billion debt load. (WSJ)

Bank mergers are on pace to hit their highest level since the 2008 financial crisis. (WSJ)

A federal court is set to hear oral arguments today in the case of Citi trying to recoup a mistaken payment that hedge funds refused to return: Audio is available live here or in a file here after arguments conclude. (U.S. Court of Appeals for the Second Circuit)

More than 130 federal judges have broken the law by overseeing cases where they or their family had a financial interest. (WSJ)

“How the Huawei Case Raised Fears of ‘Hostage Diplomacy’ by China.” (NYT)

On regulating crypto, Elon Musk said governments should “do nothing.” (CNBC)

A “fat finger” mistake saddled a crypto exchange with a $24 million fee on a $100,000 transaction. (Yahoo Finance)