Bucket-list plans for travel to exotic lands are on hold, while socializing and volunteering have gone virtual. 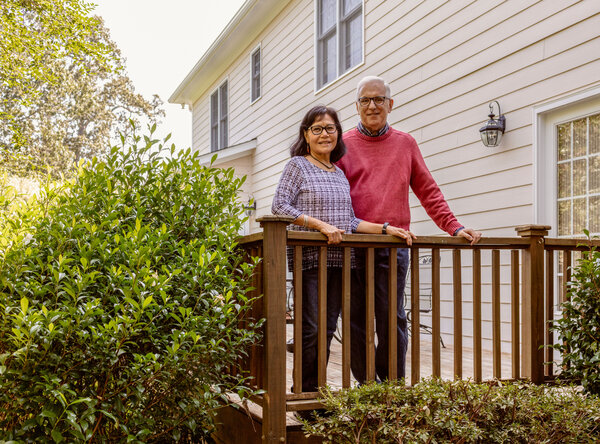 By Susan B. Garland

David Jarmul and his wife, Champa, long envisioned what their retirement would look like. After returning from a two-year Peace Corps stint in Moldova in 2018, the couple, both 67, planned extensive travel, including trips to the Baltics, West Africa and Sri Lanka.

“Travel is our passion — it’s what we love to do,” said Mr. Jarmul, who retired in 2015 as head of news and communications for Duke University.

For now, the two are living a Covid-19 retirement — packed with volunteer and social pursuits but reconfigured for a social distancing world. Mr. Jarmul is delivering groceries to a local food pantry and engaging in a get-out-the-vote letter-writing campaign. And the two are caring for their 15-month-old grandson — playing hide-and-seek and reading books — while their son and daughter-in-law work from home and supervise the online classes of two older sons.

“We are happy to spend the time with him. It’s helpful for our son and daughter-in-law,” said Mr. Jarmul, author of “Not Exactly Retired,” a book about the couple’s Moldova experience.

As for his retirement dreams, Mr. Jarmul considers himself fortunate compared to those with true hardship. “Despairing is not a great solution,” he said. “We are trying deliberately to fill our lives with activities that give us meaning — remaining connected to our friends and being good members of the community.”

Just as the pandemic has upended the lives of students and workers, it is derailing the plans of many retirees. Besides any financial toll, the significant health risks that Covid-19 poses for the elderly are forcing many retirees to defer cherished items on their bucket list: travel, volunteering at hospitals and schools, socializing at senior centers, and excursions to sports and cultural events.

Because of their age, some retirees worry they may need to scrap their plans altogether if coronavirus dangers persist.

“We recognize as we get older that the single most valuable thing we have is time, and healthy time. And time is being lost in this moment,” said Paul Irving, chairman of the Milken Institute Center for the Future of Aging, in Santa Monica, Calif. “It’s a source of anxiety for a lot of people who may be deferring plans to move or to spend time with kids and grandchildren.”

Still, more than six months into the pandemic, many retirees, after what some described as a period of fear and hopelessness, are finding ways to adapt.

Since the pandemic started, Phyllis Diamond, a Manhattan therapist and retirement coach, said clients are calling for advice on revising their retirement expectations. “I believe strongly in the importance of action,” she said. “Feeling stuck can lead to anxiety and depression.”

She suggests that clients make a “curious list” of anything they would like to learn more about. Or, she said, “you can revive old passions — things you may have done in the past but put on hold.”

Her husband bought a new guitar, an instrument he has not played for 35 years. Other clients are writing memoirs, taking art and dance classes, or preparing for second-act careers.

For many retirees stuck at home, technology is a lifeline. Though initially intimidated, they’ve turned to Zoom, YouTube, apps and streaming platforms to meet with friends, exercise, visit museums and volunteer, using websites like VolunteerMatch.org. 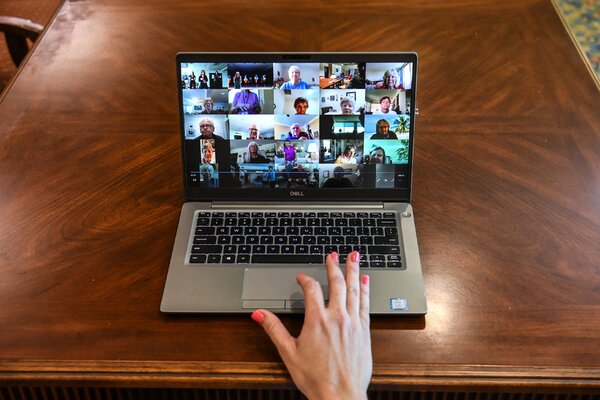 The pandemic “is forcing many retirees to use technology that they may not have used previously,” said Roger Whitney, a certified financial planner in Fort Worth, Texas, and author of the book “Rock Retirement.” “That will bode well for them in the future.”

In mid-September, the Osher Lifelong Learning Institute at Duke University began a fall curriculum of 65 courses, offered via Zoom to its nearly 2,600 members. Most courses are taught live by retired professors and other experts who are 65 and older. “Many are excited to be teaching online for the very first time,” said the institute’s director, Chris McLeod.

When the pandemic lockdown began in mid-March, the institute canceled its in-person classes. A month later, it provided lessons to members on how to use Zoom and began a series of online courses. Many of its affiliated institutes at 124 universities also have moved courses online.

Members who never took courses because they traveled or babysat for their grandchildren are signing on. “This gives them a greater sense of belonging,” Ms. McLeod said. The institute’s singles group is also meeting virtually.

Ms. Diamond said that she and several clients take classes with Vitality Society, a virtual platform for people 60 and older that combines live exercise and wellness classes with social interaction among members.

The site launched in January, and membership began to take off as older adults moved into lockdown, said Meredith Oppenheim, a senior-business specialist who started the venture. Members pay $30 a month for unlimited classes, while nonmembers pay $10 per class.

The 15 to 20 participants in a class can see each other and the coach. Ten minutes before a session begins, class-goers can sign on and chat. “They really are forming virtual relationships,” Ms. Oppenheim said. For older adults, the “need to stay well and connected,” she said, “is more urgent than ever.”

Indeed, for retirees who previously kept busy schedules dining with friends, visiting the gym, and hobnobbing at senior centers and volunteer programs, the potential for isolation and loneliness is a real concern.

Mark Fischer, 77, a retired financial planner, and his wife, Lucy Rose, 76, an artist, sought a vibrant city life when they moved last August from a house just outside Minneapolis to a two-bedroom apartment in a senior-living community downtown.

Now the building’s fitness center is closed, as is the activity room where residents attended an array of social activities and cultural programs.

To maintain their social connections, the couple have invited friends for dinner on their large balcony. And Mr. Fischer’s discovery of Zoom has “opened up the world for socializing.”

“I am talking to friends I have not seen for a long time,” he said.

Six years ago, Paula Cohen, 69, a retired antiques dealer who still scours flea markets to sell online, moved with her husband from Brooklyn to the 55-plus Concordia retirement community in Monroe Township, N.J. She made friends during social gatherings, study sessions and outings run by the Concordia chapter of the Brandeis National Committee, an organization that raises funds for Brandeis University. In mid-March, the activities ended.

But not for long. Though she had never heard of Zoom before the pandemic, Ms. Cohen, a chapter vice president, and other officers revived the group for the digital age.

Members received instructions on the technology. At the end of April, they began virtually socializing during cooking classes and discussions on books, philosophy and ethics. A new group exchanges views on streamed television series. “People are watching more TV now,” she said.

A virtual scavenger hunt was particularly popular, Ms. Cohen said. Items on the to-find list included a VHS tape and a harmonica. The player who returned first to the screen with an item won a point. The top three winners won prizes of wine and chocolate.

Scheduled for October: a live virtual tour of Lisbon led by a guide from Tours by Locals. After the “trip,” the travelers will sit by their screens eating a Portuguese lunch prepared by a couple of members and delivered to each participant’s home.

“We see 20 to 40 people each time doing these things, and it tremendously lessens the feeling of isolation,” Ms. Cohen said.

Sylvia Saba, too, wanted to figure out how to alleviate the loneliness she and other older adults were experiencing.

Before the pandemic, her days were packed with activities at her retirement community in Sarasota, Fla., and at a nearby senior center. “Then the virus came along, and we were all stuck alone,” said Ms. Saba, 65, who is divorced.

After some brainstorming, Ms. Saba, a retired French instructor, and her daughter Eva Hibnick, 35, a technology entrepreneur in Los Angeles, hit on an idea. In early July, they launched Highway61, a website to help people 50 and older remain socially engaged.

Using the audio feature on a computer, tablet or smartphone, an older person can tap into group games and discussions on books, travel and aging alone.

“We were hoping people would make new friends and chat like they would at a cafe,” Ms. Saba said.

Most participants are members of senior centers, which are closed, but anyone has access. While Ms. Hibnick runs the technology, Ms. Saba recruits senior centers and instructors.

Ms. Saba has passed on the word to her friends at her retirement community. “They love it — they come to bingo all the time,” she said.

Some retirees and those near retirement are using shelter-in-place time to explore encore careers. Colleen Kelly, 60, has had a longtime passion for nutrition and wellness, incorporating healthy eating and exercise into her frenetic life as a corporate executive in Manhattan. Her next-stage endeavor: wellness coach.

Ms. Kelly still works as chief executive of a company that designs evening apparel for the wholesale market. From her second home in Warwick, N.Y., about 50 miles from the city, she is also tackling an online curriculum on wellness coaching and building a business in the field.

Though Ms. Kelly began the program in November, she said, “the pandemic has allowed me more time to focus on it.” She practices health consultations by phone with friends who are also at home.

After Ms. Kelly leaves her full-time job in several years, she said, she intends to start a company that would assist older women improve their health by motivating them to make changes in diet and lifestyle. “I want to help people improve their immune systems, so they won’t live in fear again,” she said.

Laurie Goldwasser, 66, a retired geriatric social worker who lives in Chapel Hill, N.C., has received extensive training as a Covid-19 contact tracer for Duke. She also is printing out absentee ballot request forms and filling out envelopes to be distributed to residents of senior housing complexes.

“In the past, I would have been at farmers’ markets registering people, but I am not exposing myself,” she said.

From her home, Ms. Goldwasser volunteers for the local Meals on Wheels, which, after the pandemic started, switched from near-daily delivery of hot meals to a once-a-week delivery of five frozen meals. The change meant that volunteer deliverers could no longer visit with homebound seniors.

Several days a week, Ms. Goldwasser calls about a dozen Meals on Wheels recipients. She asks how they are doing and reports to the organization if she thinks there is a problem. The conversations cover all sorts of things, from food to books.

Ms. Goldwasser said her volunteer work with the elderly has put the pandemic in perspective.

“The simplicity of the call really makes such a difference for these people, and they have enriched my life,” she said. “It is a constant reminder about how much I have to be grateful for.”