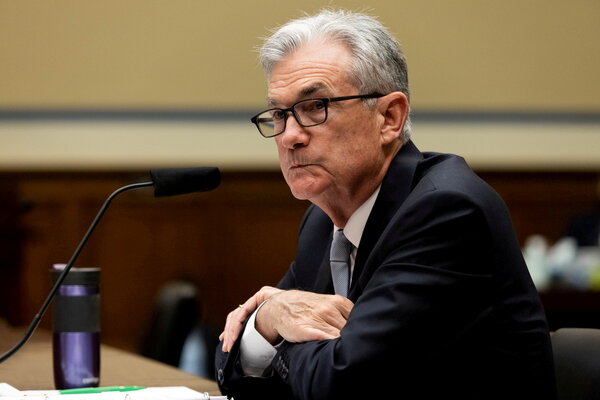 As everything from airline tickets to used cars, fresh fruit and lumber has gotten more expensive over the past several months, policymakers in Washington have repeatedly described the pop in prices as “transitory.” That word is losing its traction.

Inflation is running at a 13-year high, according to the latest stats published yesterday. While the Biden administration continues to say that price increases are temporary, many inside the White House now believe that high inflation could be with us for a year or two. That is not, well, transitory, unless you are talking about a long trip.

Jay Powell, the Fed chair, is scheduled to testify in the House today and the Senate tomorrow. Should he call inflation transitory, expect blowback. Maybe he could try “persistently impermanent” or “enduringly ephemeral” instead.

Corporate executives are preparing for a longer spell of inflation. Jamie Dimon of JPMorgan Chase told analysts on the bank’s earnings call yesterday that inflation was “a little worse than the Fed thinks.” On PepsiCo’s call, Hugh Johnston, the company’s C.F.O., said the food and beverage giant was likely to raise prices soon. “Is there somewhat more inflationary pressures out there? There is,” he said. “Are we going to be pricing to deal with it? We certainly are.”

Inflation has long been seen as the economic villain. That view is changing. For those who worry about growing inequality, inflation might actually be a salve, up to a point. A 2014 study of developed economies found that as inflation rose, income inequality tended to shrink. Inflation could be as high as 13 percent, the research found, and still act as an equalizer, shifting the benefits of economic growth toward lower-income individuals.

Wages often rise with prices, as they have in recent months. What doesn’t rise with inflation are college loans and other debt. Reducing the burden of debt with higher incomes could help improve many Americans’ finances.

Now might be a good time for modestly higher inflation, said the Harvard economist Ken Rogoff, who called for higher inflation to reset the economy after the housing bubble burst. You should think of inflation like the weather, he told DealBook. If it hasn’t rained for a long time, a major downpour is probably not a worry. A little bit of singing in the rain might be warranted.

Are you worried about inflation? If so, what are you doing about it? Let us know at [email protected]. Include your name and location and we may feature your response in a future newsletter.

Senate Democrats propose a $3.5 trillion infrastructure bill. The plan, which would have to pass along party lines, addresses issues like climate change and Medicaid that a separate $600 billion bipartisan bill does not. The big question: Will Joe Manchin come on board?

Deal makers take a victory lap. Goldman Sachs and JPMorgan Chase reported big increases in their M.&A. advisory fees in the second quarter. (Bank of America followed suit in results just out; we’ll find out how Citigroup and Wells Fargo fared later today.) Some analysts worry that the pace is unsustainable — particularly given a new focus in Washington on antitrust.

What happened to REvil? The Russian gang, which is accused of two big ransomware attacks this year, has gone offline, perhaps because of pressure on Moscow to crack down on cybercrime. But those whose data is still being held ransom by REvil may be left in the lurch.

Streaming services rack up Emmy nominations. Netflix ran neck and neck with HBO for the most nominations this year, while the top three nominated series — Netflix’s “The Crown” and Disney+’s “The Mandalorian” and “WandaVision” — were all on streaming platforms.

Elon Musk thinks Tesla should make more than cars. In his second day testifying in a shareholder lawsuit over the company’s $2 billion takeover of SolarCity, Musk defended the deal by expounding on his corporate ambitions. “The goal is not to be a car company,” he said.

The S.E.C. takes a shot at a space SPAC

The S.E.C. has brought one of its first major enforcement actions targeting a SPAC since the start of the blank-check boom. The agency said yesterday it had reached a civil settlement with several parties involved in the planned merger of Momentus, a space transportation company, and the SPAC Stable Road Acquisition.

The announcement follows the S.E.C.’s warning this year about “untested, speculative, misleading or even fraudulent” financial forecasts published during SPAC mergers. It comes as the S.E.C. is considering new rules for SPACs and is looking into potential conflicts at banks.

The S.E.C. accused the takeover target of misleading claims and its acquirer of insufficient due diligence. Momentus told investors that it had successfully tested its propulsion technology in space, when in fact the test had failed, the S.E.C. said. Stable Road repeated those statements in public filings pertaining to its deal. “The fact that Momentus lied to Stable Road does not absolve Stable Road of its failure to undertake adequate due diligence,” said Gary Gensler, the S.E.C. chairman.

The SPAC can still go ahead with the deal, so long as the parties settling the agreement pay $8 million in penalties, forfeit certain founder shares and allow outside investors to get out of the deal before it is put to a shareholder vote.

“The more it shares about what happens on its platform, the more it risks exposing uncomfortable truths that could further damage its image.”

Activist investors had hoped to persuade fellow shareholders of the drug company Phoenixus to sever ties to its founder, the “Pharma Bro” Martin Shkreli, by voting out its board this week. They failed.

The activists’ candidates were handily defeated, with an average of 70 percent of shares voted against them, according to a letter to investors. It was always a tough goal: Shkreli owns a roughly 44 percent stake in Phoenixus (originally known as Turing Pharmaceuticals), and is allowed to vote despite being imprisoned for securities fraud. “Allowing Martin to vote his forfeited shares is an incredible injustice,” Jason Aryeh, a leader of the dissident group that thinks the current board is too close to Shkreli, told DealBook.

Phoenixus’s chairman and C.E.O., Averill Powers, was the only incumbent director to lose re-election — with 96 percent of shares voted against him. The company didn’t return a request for comment.

The activists are betting they may win later. Aryeh said the group planned to call for another vote once a judge overseeing a creditor’s lawsuit against Shkreli formally appointed a receiver to take away his shares to settle his debts.

The European Union will try to defy its reputation for being slow and indecisive today when officials unveil a plan to beat the rest of the world in cutting carbon emissions, The Times’s Jack Ewing writes for DealBook from Frankfurt.

The E.U.’s blueprint, branded “Fit for 55,” calls for its 27 members states to cut their output of greenhouse gases 55 percent by 2030, when compared with 1990 levels, by setting tougher targets for almost every industry, especially those blamed for contributing the most to global warming, like automakers, airlines, steel producers and energy firms.

The E.U.’s target is more aggressive than that of the United States, which committed to reduce emissions by 40 percent to 43 percent over the same period, but behind that of Britain, which pledged a 68 percent reduction. China, the world’s largest emitter, has said only that it aims for emissions to peak by 2030.

What’s in the plan: Automakers will face pressure to phase out internal combustion engines sooner; airlines will be compelled to use synthetic fuels; steel makers will need to pay more for emissions credits; and electricity producers will be pushed to speed up the switch to wind, solar and hydropower. Most contentiously, a border carbon adjustment tax would impose tariffs on the emissions linked with products imported from outside the E.U.

Expect furious lobbying as the plan makes its way through the legislative process in Brussels and national capitals, given how many interests are at stake. The plan could also meet resistance from major trading partners like the U.S. because it would penalize imports from countries seen as having lower environmental standards.

There will also be cash. E.U. governments will be able to draw on a fund worth 750 billion euros, or $890 billion, to make the transition to cleaner energy. Ursula von der Leyen, the president of the European Commission, has made the “European Green Deal” one of her top priorities and can draw on support from Europeans increasingly alarmed by wildfires, record hot summers, severe storms and other tangible evidence of the toll of climate change. The diplomatic cost of today’s move is seen as a small price to pay.

LeBron James’s entertainment company, SpringHill, is said to be weighing a sale at a valuation approaching $750 million. (The Information)

Alex Rodriguez’s SPAC is reportedly in talks to merge with Panini, a maker of sports collectibles. (Bloomberg)

“Have you no shame?” President Biden made an impassioned speech yesterday on attempts to restrict voting access. (NYT)

Stephen Calk, a former Chicago bank chief, was convicted of bribery for pushing loans to the former Trump campaign manager Paul Manafort in hopes of getting a role in the Trump administration. (NYT)

A unit of TIAA will pay $97 million to settle charges that it persuaded investors to move money from company retirement plans to higher-fee plans. (NYT)

Russell Capone, a former anticorruption chief in the Manhattan federal prosecutor’s office, is joining the law firm Cooley as a partner. (Cooley)