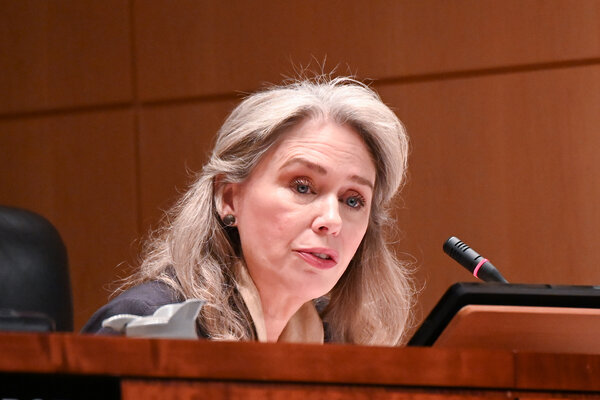 Allison Herren Lee was named acting chair of the Securities and Exchange Commission in January, and since then she has been active, especially when it comes to environmental, social and governance, or E.S.G., issues. The agency has issued a flurry of notices that such disclosures will be priorities this year. Today, Ms. Lee, who was appointed as a commissioner by President Donald Trump in 2019, is speaking at the Center for American Progress, where she will call for input on additional E.S.G. transparency, according to prepared remarks seen by DealBook.

The supposed distinction between what’s good and what’s profitable is diminishing, Ms. Lee will argue in the speech, saying that “acting in pursuit of the public interest and acting to maximize the bottom line” are complementary. The S.E.C.’s job is to meet investor demand for data on a range of corporate activities, and Ms. Lee’s planned remarks suggest that greater transparency on E.S.G. issues won’t be optional for much longer. “That demand is not being met by the current voluntary framework,” she will say. “Human capital, human rights, climate change — these issues are fundamental to our markets, and investors want to and can help drive sustainable solutions on these issues.”

Ms. Lee will also argue that “political spending disclosure is inextricably linked to E.S.G. issues,” based on research showing that many companies have made climate pledges while donating to candidates with contradictory voting records. The same goes for racial justice initiatives, she will say.

This is not an interim priority. Ms. Lee is acting chief, but based on recent statements by Gary Gensler, President Biden’s choice to lead the S.E.C., she’s laying the groundwork for more action rather than throwing down the gauntlet. In his confirmation hearing this month, Mr. Gensler said that investors increasingly wanted companies to disclose risks associated with climate change, diversity, political spending and other E.S.G. issues.

Not everyone at the S.E.C. is on board. Hester Peirce and Elad Roisman, fellow commissioners also appointed by Mr. Trump, recently protested the “steady flow” of climate and E.S.G. notices. They issued a public statement, asking, “Do these announcements represent a change from current commission practices or a continuation of the status quo with a new public relations twist?”

Accounting standards should be clearer on how to measure the financial impact of carbon emissions.

More prominent Democrats abandon Gov. Andrew Cuomo. Lawmakers like Speaker Nancy Pelosi and Representative Alexandria Ocasio-Cortez suggested, to varying degrees, that the governor of New York consider resigning over allegations of sexual harassment. He has rejected those calls and is considering running for a fourth term.

The U.S. is considering new ways to protect itself against cyberattacks. Efforts by China and Russia to breach government and corporate computer networks — and the failure of American intelligence to detect them — have spurred discussions about ways to organize U.S. cyberdefenses, including more partnerships with private companies.

Credit Suisse is accused of continuing to help Americans evade taxes. The Swiss bank aided clients in hiding assets, seven years after it promised U.S. federal prosecutors that it would stop doing so, according to a whistle-blower report. That puts the firm at risk of a fresh investigation and more financial penalties. The bank said it was cooperating with the authorities.

A veteran Democratic official is poised to join the Biden administration. Gene Sperling, an economic wonk who served in the Clinton and Obama administrations, is likely to oversee the implementation of the $1.9 trillion stimulus plan, Politico reports.

Stripe is now Silicon Valley’s most valuable start-up. The payments processor has raised funding from investors like Sequoia and Fidelity at a $95 billion valuation. Stripe plans to use the money to expand in Europe, including in its founders’ home country, Ireland.

Blockchain for the underbanked

Brian Brooks, the former acting chief of the Office of the Comptroller of the Currency, is really into blockchain. He was, after all, the chief counsel of the cryptocurrency exchange Coinbase before joining the O.C.C. But his enthusiasm isn’t based on Bitcoin’s success as much as on his personal struggles, he told DealBook.

Mr. Brooks borrowed his way out of an ailing town. He grew up in Pueblo, Colo., a steel center that lost its purpose in the 1980s. His father took his own life when Mr. Brooks was 14, and he and his mother had little. In high school, he waited tables and took out loans for school, for a car and eventually for a home. Now, he’s betting that blockchain can help the underbanked do the same more easily.

“Unlocking credit availability allows people to move up the ladder,” Mr. Brooks said. Nearly 50 million Americans don’t have credit scores, but many are creditworthy. Traditional rating systems aren’t equipped for nuanced assessments that might include things like rent, Netflix bills or income from gig work. For many, the inability to borrow limits opportunities to achieve financial security.

At the O.C.C., Mr. Brooks started Project Reach, a financial inclusion initiative. His first move since resigning from the agency in January is to join the board of the fintech firm Spring Labs as an independent director, DealBook is the first to report. Among other things, the company is developing richer data environments for credit scoring using blockchain tech.

Finding solutions to financial inclusion that are immune to politics is key, noted Mr. Brooks, a Trump administration appointee. Credit, he argues, lets people bet on themselves regardless of which party is making policy, and the current system excludes many worthy borrowers. “Let’s let more people climb ladders,” Mr. Brooks said.

“It’s just a pent-up cycle where the money has nowhere to go, so it’s doing stupid things.”

— Howard Lindzon, an investor, entrepreneur and market commentator, speaking to The Times’s Erin Griffith on the booms (or bubbles) in everything from trading cards to Bitcoin, SPACs and so-called meme stocks.

The pharmaceutical industry is popular right now, which is perhaps unsurprising considering that the end of the pandemic depends on Covid-19 vaccines. Drug makers’ rapid response to the crisis has transformed public sentiment about the industry, moving it from one of the most reviled to one of the most respected, according to new data from the Harris Poll, revealed exclusively in DealBook.

A year of living in fear created unlikely heroes. For the past year or so, the Harris Poll has monitored public sentiment in weekly surveys of more than 114,000 people. At the height of the emergency, more than half of respondents were afraid of dying from the virus and a similar share were afraid of losing their jobs. “Only in the past month, with vaccines rising and hospitalizations and deaths declining, is fear abating,” the report noted.

Business got good grades during the pandemic. Many respondents cited companies as important to solving problems, where previously they were considered the cause of social woes. (Two-thirds said that companies could do a better job coordinating the vaccine rollout than the government could.) Approval ratings rose for many industries from January last year to February this year. But the reputation of the pharma industry — stained by its role in the opioid crisis and criticized for high drug prices — benefited the most. In January 2020, only 32 percent of respondents viewed the industry positively; late last month, that had almost doubled, to 62 percent.

“The pharmaceutical industry’s ability to innovate and perform under intense pressure and in a time of crisis is the ultimate validation for any business,” said John Gerzema, the C.E.O. of the Harris Poll.

On Big Government and Big Tech

Silicon Valley has been lauded for decades as a hotbed of ingenuity, where companies like Google were born from the brains of entrepreneurs. But in the latest episode of The Times’s Opinion podcast “Sway,” the economist Mariana Mazzucato told Kara Swisher that the traditional narrative has holes in it.

“Do you have any idea where the innovation in places like Silicon Valley came from?” asked Ms. Mazzucato, the founder of University College London’s Institute for Innovation and Public Purpose. She ticked off technologies like the internet and GPS: “We wouldn’t have any smart product without all the smart technology, which was government-financed.”

“It’s not that the private sector is not doing anything,” she said. “It’s that the government comes in first, does the heavy lifting and invests in the most early stage, high-risk stage — which is exactly the opposite of the storytelling and the narrative.”

“We have to admit that value is collectively created,” she said. “It’s not just created in business. The public sector itself is a value.”

Listen to the conversation here.

The French food giant Danone ousted Emmanuel Faber as its chairman and C.E.O., under pressure from two activist investors. (FT)

A Maryland hotel magnate who cut a deal to buy The Baltimore Sun from Tribune Publishing may instead challenge Alden Global Capital for all of Tribune’s newspapers. (NYT)

The value of short bets against SPACs has more than tripled since the start of the year. (WSJ)

Jeff Bezos declined an invitation to speak at a Senate hearing on economic inequality, which will include testimony from an Amazon employee involved in union organization efforts in Alabama. (CNN)

With pandemic stimulus out of the way, President Biden is now making infrastructure spending a priority. Can it pass Congress? (FT)

Ant Group’s C.E.O., Simon Hu, resigned amid pressure on the Chinese fintech giant from Beijing to overhaul its business. (NYT)

In a securities filing, Elon Musk gave himself a new title, “Technoking of Tesla,” and the company’s C.F.O. Zach Kirkhorn is “Master of Coin.” (S.E.C.)

Peter Diamandis, the founder of the X Prize, held an in-person conference that became a Covid-19 superspreader event — and then followed up with a webinar that touted questionable treatments. (MIT Technology Review)

How the I.P.O. of Coupang, an e-commerce giant, signals a potential weakening of South Korea’s traditional corporate elite. (Bloomberg)

Some at Goldman Sachs are reportedly frustrated by the leadership of David Solomon during the pandemic, including his criticism of working remotely — while he himself has booked numerous getaways. (Bloomberg)