Andrew Moffat, the gay teacher targeted by Muslim anti-LGBT protesters at Parkfield community school in Birmingham, is wearing his usual rainbow lanyard and says he feels safe again. A year on from the ugly scenes outside the school gate, his hands no longer tremble, there have been no recent death threats, and he doesn’t have to call home when he arrives at work each morning.

He’s just published his second book, No Outsiders: Everyone Different, Everyone Welcome, a new version of his award-winning lessons on equality, No Outsiders.

As a result of his experience at Parkfield a year ago, where activists and parents protested against lessons at the school, wrongly claiming they were part of the government’s plans for relationships and sex education, and hundreds of children were withdrawn from school by their parents, Moffat has made one significant change to his second book. Now he no longer calls on everyone to “celebrate” LGBT people. Instead, he wants the community to accept that there are different sexual orientations and that LGBT+ people exist.

The change is likely to face “a roar of disapproval from defenders of LGBT equality”, he acknowledges.

Looking back at the protests, Moffat thinks the word “celebrate” might have been a sticking point for some Muslim parents.

“I am very happy to be gay myself and I’m celebrating that, but I don’t expect you to celebrate my sexual orientation with me,” he says. “However, I do expect it to be accepted without judgment in the same way I will accept those parts of you that may be different to me.”

He hopes the “realistic” change in terminology will address the concerns of some faith groups, although he realises others might see the change as a climbdown.

Almost all – 98% – of children at Parkfield community school are Muslim, and many of their parents joined the noisy protests, orchestrated by outside activists, against the government’s plans to introduce relationships and sex education from September 2020. The protesters alleged Parkfield was already teaching four- and five-year-olds about gay sex, and even said teachers were using clay models to demonstrate LGBT “sexual mechanics” to infant classes.

In fact, LGBT+ equality is only a small part of No Outsiders, the equalities programme Moffat had pioneered at the 770-pupil school, where 23 nationalities are represented. The scheme included welcoming people of any race, colour or religion and those who are lesbian, gay, bisexual or transgender, and introducing young children to the idea that there are many different types of families, including ones with two mummies or daddies.

Under the programme, older children read books showing that love can grow between many kinds of people, including those of the same sex.

The school said its teaching was in line with the Equalities Act 2010, and Ofsted approved it as “age appropriate” and “accepted by most parents”. Moffat was one of 10 teachers worldwide shortlisted for a $1m global teaching award as a result of the success of his scheme.

In his new role Moffat is busier than ever, training other schools to use the scheme. His second book shows how people who are very different, from eye and hair colour to disabilities, race and sexual orientation, can get on well together and should not be made to feel outsiders.

He has updated and changed some of the recommended resources, including a wider range of cultures and nationalities, and is publishing a film on YouTube of a No Outsiders public speaking competition at a Cheshire academies trust, in which children explain what made them feel left out.

He insists that the change in terminology, from “celebrate” to “accept” is not a climbdown. “The last six months have been a huge learning curve and sometimes the right thing to do is step back and listen and reflect. I am not always right. Sometimes there is no right or wrong response; there’s just a response and the ‘right or wrong’ depends on the listeners experience and understanding.

“The challenge is to work with the response to find common ground while bringing people with me,” he says.

Interestingly, it was a Church of England vicar, who wrote to Moffat praising the No Outsiders programme who prompted the re-think. 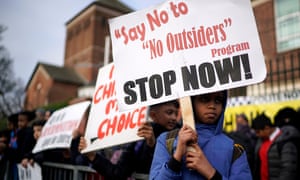 “He asked me to consider that for some people of faith, while ‘tolerating’ LGBT was realistic, ‘celebrating’ was not. This stuck in my throat. My initial response was to accuse him of being homophobic and of asking me to accept his homophobia.

“But, on reflection, I realised all he was asking for was to be allowed to tolerate rather than celebrate. Is that an unreasonable request? I may get a backlash from the LGBT community, but I think I am being realistic. To say ‘I know you are Muslim, gay, black’ is not inviting people to make any judgment. They just need to know.”

This time last year he had feared No Outsiders was under threat, but other schools continued to use it.

“Looking back, we all felt isolated and vulnerable. I was frightened all the time. I’d built up a good relationship with the children over four years and it was crumbling; children were walking away from me, they would walk out of my assemblies. I would say good morning to them and they wouldn’t answer,” Moffat says.

“What do you do when children get up and leave an assembly. Do you put a bouncer on the door? What if they all get up? We decided I wouldn’t do assemblies for a while, which you could argue was a climbdown, but it is about managing a school and avoiding confrontation.”

The demonstrations stopped last autumn after a judge upheld a ban on protests outside another Birmingham primary. Now Moffat is enjoying his new role at the Excelsior trust, and already this year has visited 12 schools to train them and delivered 16 conference speeches and workshops, plus teacher training at universities.

Was he forced out of Parkfield? “Not at all. I took up the post in January this year and was at Parkfield a term before that. Reports last year that we had stopped the lessons and assemblies were wrong.

“We tweaked the age at which one book was used and substituted one for another to show we were listening, but we did not give way.”

He continues to take assemblies at Parkfield and conducts regular workshops for parents to explain what the children are learning.

Before he joined Parkfield, Moffat had left his previous primary school after Christian parents complained that he had come out as gay. “When I came to Parkfield I knew I couldn’t afford to get it wrong again,” he says.

So did he get it wrong again? “Actually, I don’t think I did because it worked for four years. But as much as I say I wasn’t wrong, I can’t just absolve responsibility. You can’t just wave a flag; you have to deal with the perception and try to bridge that gap.

“I do think, though, that perhaps I underestimated the potential influence of groups outside the parent community at my school and their ability to upset the understanding of our equality work.”

And the protests have given his equality teaching a much bigger profile. Now his hope is for a generation of better informed and kinder young people who accept differences in society – even if they don’t always celebrate them.