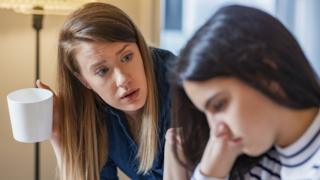 We may never forget the coronavirus lockdown. But are we still going to be talking to each other at the end of it?

Because apart from worries about the virus, there are likely to be rising tensions in some families having to live on top of one another at home.

In ordinary times, couples spend on average two-and-a-half hours together each day, says researcher into relationships Prof Jacqui Gabb of the Open University.

But that was in the BC era (before coronavirus), and now we can spend 15 or 16 of our waking hours together. And throw into that combustible mix, children who are out of school.

Is it going to leave us seething with irritability or bring us serenely closer than ever before?

“We’ve never lived through something like this,” says Prof Gabb.

Most of the usual emotional pressure-cooker points – like being cooped up together at Christmas or going on a family holiday – have clearly defined exit points.

But not with the coronavirus lockdown.

“There are no certainties any more,” she says.

But there are all the ingredients for stress on relationships, she says.

There are worries about jobs and money, not enough personal space, lack of childcare, not being able to do the things you enjoy, not seeing friends and the anxieties caused by the virus outbreak.

“I am a single parent who is a key worker. I can work from home but am finding it impossible with my six and 10-year-old at home. Work have said I can drop my hours, but will lose the pay which I can’t afford. My son has immune difficulties so cannot send him to school and we live with my 84-year-old mother. Feel really stuck!” Shelley-Ann on workingmums.co.uk

“Lack of freedoms will be felt differently,” says Dr Caroline Schuster, a psychologist who has worked with families in Dorset and Wiltshire.

She says people might be feeling a “lack of privacy, boredom and isolation, even in a family”.

“For all of us, kids included, there is a loss of the old way of life.”

Both experts say they expect an increase in domestic violence from the lockdown.

But Prof Gabb warns that self-broadcasting on social media during the lockdown can put even more psychological pressure on families. Particularly if the smugness levels get too high.

“Not everyone is at home in their giant kitchen. Other people are struggling to feed their kids and are going stir-crazy,” she says.

“My parents are so annoying. I’ll come downstairs and say, ‘Good morning’, and they’ll reply, ‘Good AFTERNOON’. It’s like, OK, I’m a bum, I get it.” From “annoying parents” on Twitter.

The story of the lockdown is being seen through the eyes of the haves, rather than the have-nots, says Prof Gabb.

“It’s not as easy as just put on an exercise video and bond with each other,” she says.

Her concerns are echoed by research from Save the Children, with the charity finding the biggest worries for parents in the lockdown are getting enough food, helping children with schoolwork and concerns about money.

Children are worried about someone in their family getting sick, food shortages and not seeing friends.

The loss of control over much of our everyday lives is stoking the domestic tensions. For adults used to being independent “it’s quite infantilising”, says Prof Gabb.

“A sense of control is incredibly important for humans,” says Dr Punit Shah, a psychologist at the University of Bath.

When we feel we have no control we feel stressed – and he says there are all kinds of “coping mechanisms” appearing.

People might take a sudden interest in exercise, or focus on cleaning their house or working on the garden, giving them a sense of control over something.

“It is absolutely not possible to facilitate distance-learning with a primary-aged child and work from home at the same time. The very idea is nonsense. If you’re trying to do that, stop now. You can certainly have activities where your child learns, but your focus is your job, and survival. Stop trying to be superheroes.” Joseph Hellett to parents in Hastings.

But Dr Shah says we should be more upbeat about what might emerge from this enforced confinement – and to “give ourselves more credit” for how we’re adapting.

There could be an “identity shift” within families, as parents and children get to know each other better, says the psychologist.

“We shouldn’t assume it will be negative and problematic,” he says.

Dr Shah says we’re still finding out during this experience what helps us feel better.

It might be a case of fear and clothing in the lockdown.

Because in his case, Dr Shah says he feels more comfortable wearing smart working clothes when he is working from home, even if it surprises everyone else on the video conference.

One of the most visible tactics for stress-busting seems to be the family pet. When you go outside everyone who isn’t jogging seems to be walking a dog.

“There are really positive benefits,” says Prof Gabb. Pets are particularly important for people living on their own, a group she thinks are not being adequately acknowledged during the lockdown.

Walking a dog might also make people feel more justified in being outside – and Dr Shah says our behaviour is being heavily influenced by “social pressure”.

This includes parents feeling made to feel guilty about not having turned overnight into an accomplished teacher for their stay-at-home children.

But there are soothing words for anyone already suffering from laptop neck or Zoom ache.

A primary school head teacher in Hastings sent a message telling parents “not to stress or feel guilty” during these strange weeks.

“Stop trying to be superheroes,” he told them.