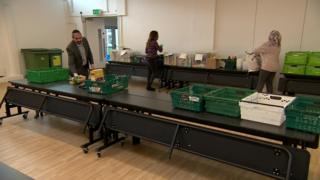 The Department for Education says it does not know how many vouchers for free school meals have been delivered to parents over the past month.

A scheme to give poor pupils in England vouchers worth £15 a week until schools reopen has been beset with problems.

Some school staff have had to stay up late into the night to access the online system, while many parents cannot download the vouchers.

Edenred, which runs the scheme, said it was aware of problems.

About 1.3 million children in England are eligible for free school meals.

One school, in Worcestershire, unable to access vouchers for their vulnerable families for the past fortnight, turned to a charity to provide food parcels.

“It’s complicated, overloaded, we’ve got families who’ve not received a voucher for 10 days, that’s two weeks’ worth of vouchers,” she said.

“They have received the codes but then the system has not allowed them in to redeem their codes.

“And then some of our families that have actually managed to get that far have turned up at the supermarket and not been able to use them against their shopping.”

In Wembley, north London, Elsley Primary School has resorted to food parcels and vouchers bought from its own budget.

Head teacher Raphael Moss has even had to use his own personal credit card.

From the outset, he said, the “unnecessarily complicated” system had thrown up “a catalogue of errors, of chaos really, with the system not being able to cope”.

In Bodmin, Cornwall, school catering manager Jo Wotton said she had paid for a family’s shopping after the mother’s voucher code failed at a supermarket till.

“The shopping was £16 – it was obvious she had counted her money really carefully, going round the supermarket.

“She had a small child with her.

“I could see she was getting really flustered.”

The checkout worker told her the supermarket had seen several vouchers fail the same day.

Heather McNeillis, a mother of four children under 10, three of whom are eligible for free school meals, said she had waited two weeks for her first vouchers.

“The money matters – we’ve been able to eat fresh fruit and vegetables because of it,” she said.

“I’ve had it on my computer all day, trying several different ways.

“And it’s always a long wait… and an error code.”

Scotland, Wales and Northern Ireland have devised their own systems for helping their vulnerable pupils, which are more straightforward and have had fewer reported problems than the English system.

The Department for Education and Edenred said £35m worth of vouchers had been redeemed over the past month.

However, neither were able to say what proportion of that total were orders registered for the 15,500 schools signed up to the system, as opposed to vouchers actually delivered in a useable form to families.

The Department for Education told BBC News: “We do not have this data available at this time.”

They also said they did not know how many eligible children had been registered with the scheme, though they said the total number of schools on the system represented about 70% of those that qualified for the programme.

They did, however, say schools that could not make the Edenred system work would be reimbursed for creating alternative schemes.

“We are providing additional funding to schools to cover unavoidable costs incurred due to the coronavirus outbreak that cannot be met from their existing resources – including free school meal costs which are not covered by the national voucher system.”

In a statement, Edenred said: “The free school meals voucher scheme is helping thousands of families and the vast majority of codes and vouchers are being redeemed successfully.

“We are aware that some schools have faced long wait times when using the site.

“We would like to thank each and every person who has faced issues in the process of ordering codes and e-gift cards for their patience, particularly given the other pressures facing schools at this time.”