“Have you heard of a guy called Tony Blair?”

The question, posed during a virtual GCSE history lesson at Magherafelt high school in county Derry, Northern Ireland, elicits a series of nods from the dozen or so pupils who have joined.

“Tony Blair actually won an election, and one of his main issues was he wanted to sort out the peace process in Northern Ireland,” explains Denver Charles, head of history at the non-selective and largely Protestant school. “He invested his premiership and political goodwill to get the talks going again.”

Today’s lesson on the peace process, is part of a local study unit in the GCSE syllabus of the Northern Ireland council for the curriculum, examinations and assessment (CCEA). And, ironically, it is at the centre of a debate about whether the curriculum itself is dividing schools along the lines of the conflict.

A survey of Northern Ireland’s secondary schools, conducted by two classes of English year 11 pupils as a lockdown project, has shown that the vast majority of Catholic schools teach this unit, which covers the years 1965-98 and which majors on civil rights and the Troubles. But just under half of “Protestant” schools – those with a Protestant denomination or controlled by the state rather than by the Catholic church – teach the 1920-49 period instead.

According to Parallel Histories, a charity that aims to find new ways of teaching about recent conflicts, children studying the earlier period of 20th century history never learn that institutionalised discrimination against Catholics was written into the fabric of Northern Ireland’s laws since its creation in 1921. For those studying the later period, however, this is spelled out on the first page of the coursebook.

Michael Davies, the charity’s founder, has been working with schools in Stoke-on-Trent and in Lancaster to help them find out which of the units Northern Irish schools teach. They found a definite bias along denominational lines: four out of 10 Protestant schools for which data was available taught the earlier unit, compared with just one in 10 Catholic schools. 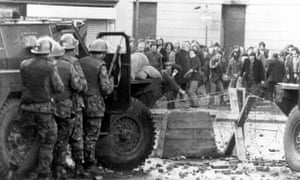 “The second unit [1965-98] is the story of struggle for a minority to get full civil rights,” he says. “The earlier unit [1920-49] features Northern Ireland’s suffering during the second world war, and its contribution to the ending of the greatest evil of the 20th century.”

Both units avoid controversy, he adds. The word “Protestant” does not even feature in the index of the coursebook, and “Catholic” only appears in the context of the Roman Catholic church as an institution. Instead, the population are described as republicans or unionists, airbrushing the religious divisions that fuelled the Northern Ireland conflict, Davies argues.

Parallel Histories’ research team consisted of pupils at St Joseph’s College in Stoke-on-Trent and at Lancaster Royal Grammar school. The charity, which has devised a course taught to children on both sides of the Israeli-Palestinian conflict, is now working with a group of Northern Irish schools to devise a GCSE history curriculum that covers the whole period from 1920, and which will place the two competing narratives alongside one another. “The sense of victimhood is always there in post-conflict situations,” Davies says.

“Actually there are some Catholics who have no idea what the Protestant story is. There’s a really positive Protestant story to tell: you could say it’s about freedom of thought, freedom of religion. They could point out that some of the earliest advocates of Irish independence were Protestant. Instead we have an eviscerated, inoffensive curriculum that occupies the middle ground and which is not recognisable to people when they go home and talk about their history.” 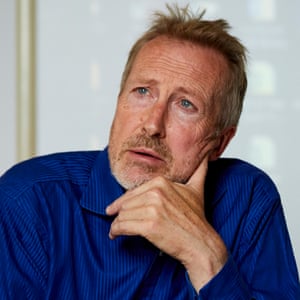 Mairtina McCormick, head of history at St Mary’s Grammar School, Charles’s neighbouring Roman Catholic school in Magherafelt, says all three of the schools in which she has taught have opted to teach the later period of history. It is more interesting, she says, and more relevant to her pupils.

“When I started teaching 20 years ago, pupils would say their parents remembered stuff – it’s the grandparents now,” she says. “Someone will say, ‘My grandfather was interned.’ It definitely opens up conversations at home. But I think the course does try to be balanced. I suppose they are trying to do it in a way that deals with topics that are controversial, but makes them as easy as it can.”

A substantial and growing number of Protestant schools, such as Magherafelt high school, do teach the later period. But the proportion is much greater among grammar schools than among non-selective schools. Exam board statistics show three-quarters of all schools teach the later period. But Parallel Histories’ survey found that among non-selective Protestant schools for which data was available, more than half were teaching the earlier period.

Matt Jess, who has taught history in Protestant schools for many years and who has taught both units, says the earlier period may be perceived as easier for pupils in non-selective schools. “How much land was cultivated, how many ships were built to help the war effort, that kind of thing. I think that would be seen by many history departments as something that was easier for pupils to grasp and to pass the exam in than the other course, in which you tend to be dealing with a lot more abstract ideas, like power-sharing,” he says.

The CCEA exam board said it did not have information on which unit was taught in each type of school. But the key stage 3 curriculum (for Northern Irish children aged 11-14) did require pupils to evaluate different perspectives on Irish history: for example in lessons on “1916 and beyond”.

“Within the Northern Ireland curriculum, teachers encourage learners to engage with history in an active and critical way,” the board said in a statement. “This helps learners to assess evidence, evaluate conflicting accounts and understand the causes and consequences of change.”

Magherafelt high school switched to the later period fairly recently. For Charles, who is chair of the History Teachers’ Association of Northern Ireland, the decision to change from the earlier period was a fairly simple one: “I would say today most schools are teaching the 1965-98 unit for the simple reason that it’s much more interesting,” he says.

But, he adds, maybe the passing of time has also helped. “Before, teachers were afraid of it. The wounds were quite raw and we didn’t want to revisit the pain. Twenty years on, to be honest, I am very glad to say I teach 14-year-olds the Troubles and I get them to talk to their grandparents about it. My philosophy is basically that there’s no history that’s too controversial.”