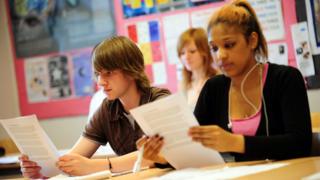 University students in England will still have to pay full tuition fees even if their courses are taught online in the autumn, the government has said.

“We don’t believe students will be entitled to reimbursement if the quality is there,” universities minister Michelle Donelan said.

But the university sector’s request for a £2bn bail-out has been rejected.

Universities had warned of financial danger from a reduction in overseas students because of the coronavirus.

University campuses have been closed by the pandemic – and there is uncertainty for students whether there will be in-person teaching in the autumn or whether courses will be taught fully or partly online.

The universities minister said no formal decision had been taken on the next academic year, but if courses are taught online and “students are really getting the quality, and they’re getting a course which is fit for purpose”, they would not get a discount on fees.

“Universities are still continuing with their overheads and their expenses during this time, and it’s no fault of their own,” she said.

If students were not getting adequate teaching online, she said there were processes for them to complain.

As well as weighing up whether they want to study online, applicants will be waiting for information on how a reopened campus might function, in terms of social distancing, social activities and student accommodation.

The National Union of Students has highlighted how difficult it can be for current students to study online, with some struggling with a lack of computer equipment and broadband access and not having enough space in which to work.

A study from the Sutton Trust suggests some applicants are reconsidering their university plans, in a year group that has already seen exams cancelled and replaced by estimated grades.

There is a “huge degree of worry and uncertainty,” says trust founder, Sir Peter Lampl.

There are particular financial worries for universities about an expected drop in overseas students, who pay a higher level of fees.

Last month, Universities UK called for at least £2bn in emergency funding, saying that otherwise some institutions could go bust.

Ms Donelan has announced measures to stabilise university finances, but without the extra cash requested.

To help with cash flow, £2.6bn of tuition fee income and £100m of research funding will be brought forward and universities will be able to access the Treasury’s support for businesses disrupted by coronavirus, worth another £700m.

“Should providers require further support the government will continue to review their financial circumstances,” said the universities minister.

There will also be more flexibility in the clearing system, which matches applicants to empty places after results are issued.

Universities have been worried about “volatility” in applications and that some universities could be so short of recruits they would be financially unviable.

To stop such fluctuations, there will be controls on student numbers, designed to stop some universities adding many more students, while others could be be left with too few.

The Russell Group of leading universities said the “big remaining challenge” was funding for research.

Universities UK said the stability measures were a recognition of the important part universities would play in the “recovery of the economy and communities” in the wake of the pandemic and the “severe financial storm” it had created.

The universities body has said that in the forthcoming weeks current students and applicants will be given a clearer idea of arrangements for opening in the autumn.