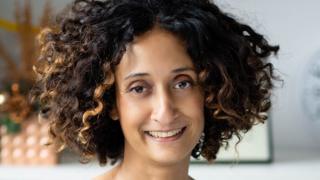 Many parents are too afraid to limit their children using mobile phones, says the head of what has been called England’s strictest school.

“I give pep talks. ‘You’ve got to take the phone, you’ve got to hold the line,'” says Katharine Birbalsingh.

But most parents “bottle it,” she says, unable to handle the extreme responses to cutting access to phones.

“We have children who go on hunger strike. They pack their bags and say they’re leaving the house,” she says.

Ms Birbalsingh, the outspoken head teacher of the Michaela Community School in Brent, north-west London, says parents and schools need to take decisions which will make them unpopular.

But for most parents, even those who have been primed to take action, “getting the phone off their kids” remains an unwinnable battle.

“It’s awful,” she says. “They’re on it in the middle of the night – unsupervised and at risk of being exposed to gangs and exploitation.”

But when parents tried to intervene: “They refused to eat, refused to come into school and the parents didn’t know what to do.”

Ms Birbalsingh has written and edited a book, The Power of Culture, about the values behind the high-achieving free school she founded in 2014.

Much of the attention on the school has been about its outward features, she says – such as the silence in corridors, a strict behaviour code, confiscating phones and an emphasis on the traditional.

But the book enters territory which she thinks is more “uncomfortable” – about the underlying ethos and her belief in “personal responsibility”, “duty” and respect for authority – and a dislike of a culture of excuses and victimhood.

She rejects the idea that poor behaviour should be treated more leniently because of a “difficult home situation”, saying that lowers expectations for those most in need of support.

“It’s much easier to let a child off rather than hold them to account. It allows us to feel good about ourselves.”

Her own family came from the Caribbean – and she says that often poorer countries have the best-behaved students.

Against the background of the Black Lives Matter protests, she says improving education is the way to make a real difference for black families.

But she warns the school system has left many young black people in England feeling culturally excluded: “I get why they feel they don’t belong.”

“They didn’t get taught about Shakespeare and Dickens – or that they were part of their country,” she says.

“Teachers would tell them all the time they weren’t part of the country – they say what country are you really from? Let’s do a cultural thing where we all bring in our flags.

She is scathing about middle class liberals who think that they are solving problems by putting anti-racist messages on to social media.

“Why don’t you spend your time working in an inner-city school like me – and then I’ll believe that you actually care about making the lives of these boys and girls better,” says Ms Birbalsingh.

“Putting a black box on Instagram for a day. What the hell is that? I’ve spent a life trying to make a difference for these children,” she says of a campaign last week putting black squares on to social media as a signal of solidarity.

“You’re some PR guy, you work in town, you earn a nice bit of money, you have a nice flat and car. But you put a black box on Instagram and you’re now a cool non-racist. You’re a good guy.

“Actually doing good takes a lifetime. The thing about doing good is that it gets you enemies. You’re not part of the group.”

Such traditional values “which would once have been completely normal have completely disappeared”, she argues.

“The vast majority of people in education would listen to what I have to say and be horrified.”

The big question for schools, she says, is: “What do we value?”