When President Trump faced (and overcame) the gravest crisis of his first campaign, he defended his boasts of sexual assault on the “Access Hollywood” tape as ultimately harmless gabbing. “Locker room talk,” he said, nothing to dwell on.

When the president faced (and overcame) impeachment in 2019 after pressing the Ukrainian president to investigate Joseph R. Biden Jr., he insisted it was merely an innocuous case of two guys talking. “A perfect call,” he said, not a high crime.

And when Mr. Trump leaves the White House no later than Wednesday — amid the impeachment sequel and uncommon comeuppance he has encountered since inciting a riotous mob in Washington on Jan. 6 — he will surrender a valued perk: an executive phone system, he once enthused, that made it feel as though his words would self-destruct before they became self-destructive.

“The world’s most secure system,” Mr. Trump marveled in a 2017 interview during his first week in office, observing that no one was listening in and recording. “The words just explode in the air.”

Poof. Gone. Just as he likes it.

For most of Mr. Trump’s 74 years, the relationship between his words and their consequences has been fairly straightforward: He says what he wants, and nothing particularly durable tends to happen to him.

But in the final frames of his presidency, Mr. Trump is confronting an unfamiliar fate. He is being held to account as never before for things he has said, finding his typical defenses — denial, obfuscation, powerful friends, claiming it was all a big joke — insufficient in explaining away a violent mob acting in his name.

Aides could not do it for him, anonymously offering more palatable accounts.

Allies could not argue that he had been misunderstood.

His own words were all anyone needed to hear on this one. 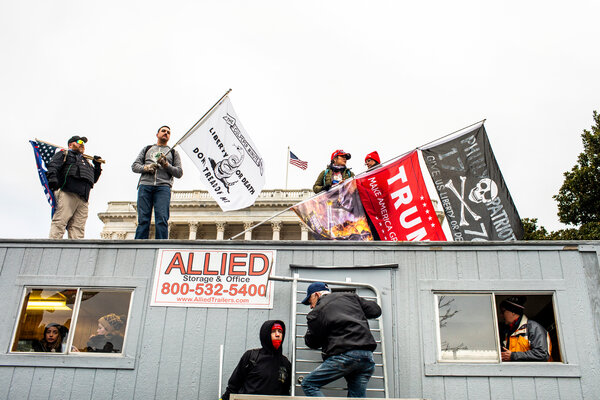 In almost certainly the most expansive series of penalties he has incurred in his life, Mr. Trump’s Twitter account has been banned, his business brand badly dented, his presidency doomed to the historical infamy of a second impeachment. His largest lender, Deutsche Bank, is moving to create distance from him. His New Jersey golf club was stripped of a major tournament. Some once-reliable Republican congressional loyalists are revisiting their commitment, threatening his grip on the party, even as the president’s popularity with much of his support base remains undimmed.

Those who have known and watched Mr. Trump across the years cannot shake the irony of a president felled by the very formula that powered his rise: inflammatory speech and a self-regard that has congealed at times into functional self-delusion.

He has never considered words to be as significant as actions, or even in the same category of prospective offense. Words were whatever got him through the next interaction, people who worked with him say. Words were not deemed important enough to invite serious trouble.

So well-developed were Mr. Trump’s survival instincts, in theory, that he had all but perfected the art of semi-plausible deniability — an upside of being on seemingly every side of every major political issue at various points in his adult life.

Hadn’t he said the right thing that one time? That was what he meant.

Hadn’t he winked at the crowd a bit? Everyone takes him too seriously.

Hadn’t he used the word “peacefully” one time in that address before the Capitol riot, tucked between the more dominant instructions to “fight” and “show strength” and “go by very different rules” as he whipped up anger against elected officials, including his own vice president, who were disinclined to subvert the will of the electorate?

“He has had a habit of saying outrageous things and then saying he was being sarcastic, he was kidding, that people shouldn’t take him literally — and in fact, if you do, what an idiot you are,” said Gwenda Blair, a biographer of the Trump family. “It’s both deniability for himself, but it’s also deniability for his followers. He gives them something to hold onto so that they can then continue to believe in him.”

But Mr. Trump, and much of the political class that was shocked and disoriented by his 2016 win, has sometimes conflated his reputational resilience with a notion that nothing he says can hurt him, no matter how ostensibly damaging.

His term has been pocked with episodes, from his equivocation on white supremacy after the deadly violence in Charlottesville, Va., to his downplaying the unambiguous risks of Covid-19, that made him an unpopular president whose contract was not renewed. Less assured is his capacity to recognize the link between his conduct and this outcome.

In fact, since entering politics, Mr. Trump has often delighted in cutting down opponents who sounded too practiced or restrained.

“Just words,” he said of Mr. Biden as the Democrat accepted his party’s nomination last summer.

“It’s just words, folks,” Mr. Trump said of Hillary Clinton at an October 2016 debate days after the release of the “Access Hollywood” tape, at once deflecting any denunciation of his own remarks and calling Mrs. Clinton’s empty. “It’s just words.”

The riot inside the U.S. Capitol on Wednesday, Jan. 6, followed a rally at which President Trump made an inflammatory speech to his supporters, questioning the results of the election. Here’s a look at what happened and at the ongoing fallout: