Welsh student and aspiring medic Maia Gould has been getting through a lot of socks recently.

Throwing them away after every shift is a must when you’re cleaning COVID-19 wards.

She took the job to help the national effort against the virus and get a sense of what life was like on the frontline in her chosen career. 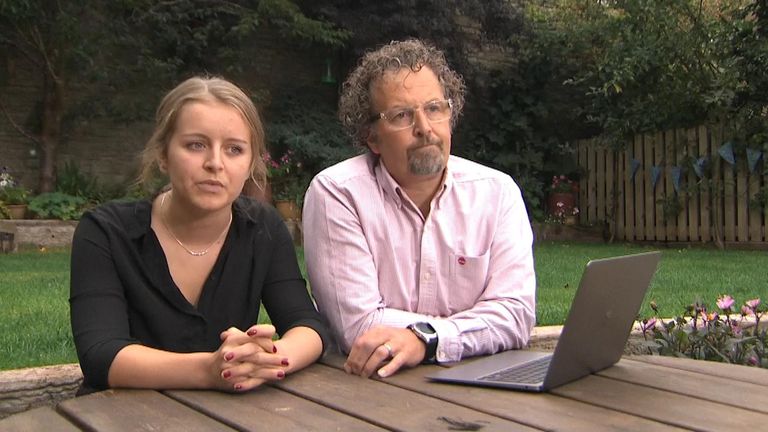 But on Thursday, her A-levels were downgraded and she lost her place to study medicine at the University of Liverpool.

Now she’s worried that her brother will suffer a similar outcome when he gets his GCSEs next week.

With predicted grades of an A*, two As and a B, along with a UCAT medical admissions test result that put her in the top 30%, Maia had every reason to feel confident about getting into her first choice of university.

“I opened the email and I said to mum and dad ‘is this a joke’?” said Maia.

She had lost five grades from her teacher assessments – marked down to A*, B, C and D – and with it her place at Liverpool.

“I feel like I’ve been handed four random letters that have come from nowhere,” she said.

“It’s unjust, it’s completely unfair. I don’t know how they can call it robust when it’s put me at such a large disadvantage.”

Her dad Ashley – who also works in the NHS – shakes his head as she explains her situation.

He says she would come home from the COVID-19 wards haunted by the tragedies she saw inside but now feels let down by a system they all wanted to support.

“I’m absolutely livid. I’ve never been this annoyed about anything in my life,” he said.

Ashley is now worried about his son Osian who will get his GCSE grades on Thursday.

Those results will also be partly determined by an algorithm.

“I’m really concerned that he’s going to get the same rubbish out of the system in terms of his grades, and that’s going to affect his confidence,” Ashley said.

“It’ll knock his ability and where he thinks he can get to in life.”

Maia is now going to appeal her grades.

But her dad says the process is unclear and the governments in Cardiff and London should change course.

“That safety net has got a really big hole in it now that children are falling through,” he said.

“They’ve had enough disadvantage with what’s gone on, they cannot suffer this injustice as well.”