Dispensing with his unity message, President Biden reached into the 2020 file cabinet and vowed to win “a battle for the soul of this nation,” the cornerstone of his successful election. 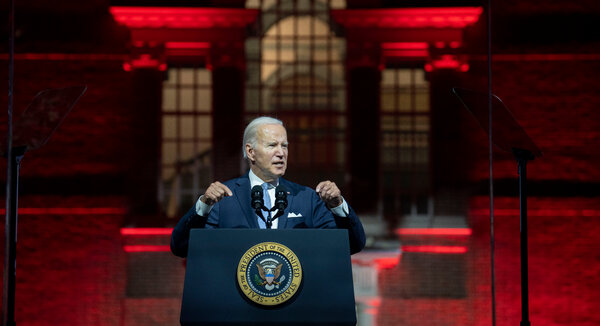 WASHINGTON — By this point in his term, President Biden figured things would be different. His predecessor would have faded from the scene and the country would have restored at least some semblance of normalcy. But as he said on Thursday night, “too much of what’s happening in our country today is not normal.”

And so the president who declared when he took office that “democracy has prevailed” declared in a prime-time televised speech that in fact democracy 19 months later remained “under assault.” Former President Donald J. Trump “and the MAGA Republicans,” as Mr. Biden termed his predecessor’s allies, still represent a clear and present danger to America.

If it sounded like a repeat of the 2020 campaign cycle, in some ways it is, although the incumbent and likely challenger have changed places. A country torn apart by ideology, culture, economics, race, religion, party and grievance remains as polarized as ever. Mr. Biden has scored some bipartisan legislative successes, but he has been singularly unable to heal the broader societal rift that he inherited. It may be that no president could have.

With an opposition party that has largely embraced the lie that the last election was stolen and remains in thrall to a twice-impeached and defeated former president who encouraged a mob that attacked the Capitol to stop the transfer of power, Mr. Biden’s appeals to national unity have found little traction. Some Republicans have argued that his efforts to build consensus were fainthearted at best, while some Democrats complain they were excessive.

Either way, they have made little difference in the national conversation. And so with the midterm congressional campaign getting underway in earnest, Mr. Biden has dispensed with the unity message, at least for now, reaching into the 2020 file cabinet and bringing out the call to win “a battle for the soul of this nation” that was the cornerstone of his successful election.

The immediate strategy is self-evident. Rather than a referendum on his own presidency, which has been hurt by high inflation and low public morale, Mr. Biden wants to make the election a choice between “normal” and an “extremism that threatens the very foundations of our republic,” as he put it on Thursday.

It is a view borne out by recent opinion surveys. In the wake of a string of legislative and policy victories, Mr. Biden’s anemic approval ratings have ticked upward, though they remain in the 40s. But when pitted against Mr. Trump in a new Wall Street Journal poll, Mr. Biden came out on top in a theoretical 2024 rematch, 50 percent to 44 percent.

Mr. Trump has arguably helped Mr. Biden set the stage for such a political showdown with his highly visible efforts to maintain his grip on the Republican Party. But it means that Mr. Biden will take on a more confrontational posture for the next two months, undermining his desire to be a conciliator.

That left him in the odd position of being accused on Thursday night of being divisive by allies of the most divisive president in modern times. Trump Republicans argued that Mr. Biden was the one tearing the country apart and threatening democracy, not the other way around. He had insulted, in their contention, the 74 million Americans who voted for Mr. Trump.