WASHINGTON — For months, Joseph R. Biden Jr. has gone to great lengths to model responsible behavior in the coronavirus era. He wears masks in public. He does not hold crowded rallies. When he gives speeches, reporters sit at a distance from one another, with white circles on the ground to mark their turf.

These actions have so far helped keep Mr. Biden healthy and able to continue campaigning while President Trump, who mocked masks and held large events, is now hospitalized with Covid-19.

But beyond the public examples of safety precautions, Mr. Biden’s health protocols have remained largely under wraps, with his campaign saying little about what steps it is taking to protect the 77-year-old Democratic nominee.

His aides will not answer questions about whether Mr. Biden is tested daily; they say simply that he is tested “regularly.” Until this weekend, they had promised to inform the public only if he had a confirmed positive case. Then, on Saturday night, after two days of refusing to provide details about Mr. Biden’s testing procedures, the campaign committed to releasing the results of all of his tests. He tested negative on Sunday, his campaign said.

Transparency has taken on new significance in the presidential race given the conflicting information about Mr. Trump’s health and the fact that his Democratic rival, who is also in an age group that is particularly susceptible to Covid-19, was exposed to the president during their 90-minute debate on Tuesday. Mr. Biden, who is ahead in national polls and many battleground state surveys, still faces the possibility of a positive test; he is continuing to campaign rather than follow public health guidelines to quarantine, and his campaign has been cagey about his health protocols.

The questions about Mr. Biden’s health come as he is confronting an unprecedented political reality: He would be the oldest president ever elected if he wins in November, and he faces the daily personal risks of a pandemic that has killed more than 209,000 people in the United States. Mr. Trump’s diagnosis, and the apparent health threat he posed during a debate where he was often talking or shouting over Mr. Biden, are forcing the Biden campaign to grapple with its own next steps and disclosures regarding the health of the Democratic nominee.

“Much like I wouldn’t discuss our security plans here on national television, I’m not going to talk about our inner workings of our health plans,” Symone D. Sanders, a senior adviser for the Biden campaign, said on CNN’s “State of the Union” on Sunday when asked what the campaign would do if Mr. Biden tested positive.

The approaches to transparency and accuracy that the two presidential candidates’ teams have taken on their health are not comparable. Mr. Biden, the former vice president, is running against an incumbent who has a long record of falsehoods, and whose White House has withheld critical information and offered misleading or suspect statements, including about the president’s health.

During the 2016 campaign, Mr. Trump released a letter from his doctor that predicted he would be “the healthiest individual ever elected to the presidency”; the doctor later said Mr. Trump had dictated the letter. And this weekend, the White House offered contradictory messages about the condition of Mr. Trump, 74, and even about when he had tested positive for the virus, fueling uncertainty for the country.

For Mr. Biden, being fully transparent with the public would not just be the ethical approach, but also a smart one, said Dr. Kelly Michelson, director of the Center for Bioethics and Medical Humanities at the Northwestern University Feinberg School of Medicine.

“It engenders trust in the community, it helps allay fears and concerns. And I also don’t really see why you would not be transparent about what’s happening,” she said. “I think that it’s important that the public knows what’s going on.”

Whit Ayres, a veteran Republican pollster, said the health of both a president and a president’s challenger were of vital public interest.

“Both candidates should be very forthcoming,” he said. “Swing voters care as much as anybody about the health of a president or potential president in the middle of a raging pandemic.”

Going back months, Mr. Biden’s campaign has not said much about his plans to be tested for the coronavirus. Shortly after the Democratic National Convention in August, a top campaign official said Mr. Biden had not been tested for the virus, even though testing had been required of others on hand when he gave his speech accepting the nomination. A day later, the campaign announced that Mr. Biden and his running mate, Senator Kamala Harris, would be tested “on a regular basis,” as would staff members who interacted with them.

Mr. Biden’s campaign announced around midday Friday that Mr. Biden had tested negative for the virus, distributing a statement from his doctor about 11 hours after Mr. Trump announced that he had tested positive.

“Since the start of the pandemic, our campaign has led by example and prioritized the health and safety of our supporters, our staff and the public in everything that we do,” T.J. Ducklo, a spokesman for the Biden campaign, said on Sunday. “We take extraordinary measures to ensure we are campaigning safely.”

Teneille R. Brown, a professor of law at the University of Utah who conducts research on medical ethics and the law, said that the White House’s secretive approach had sown deep distrust among the public, and that “it would be a great service for candidate Biden and vice-presidential candidate Harris to give us an abundance of information.”

“We have a real loss of trust in communication coming out of our leaders,” she said. “It would do a great deal to rebuild trust for there to be absolute transparency about timing, risk, exposure.” 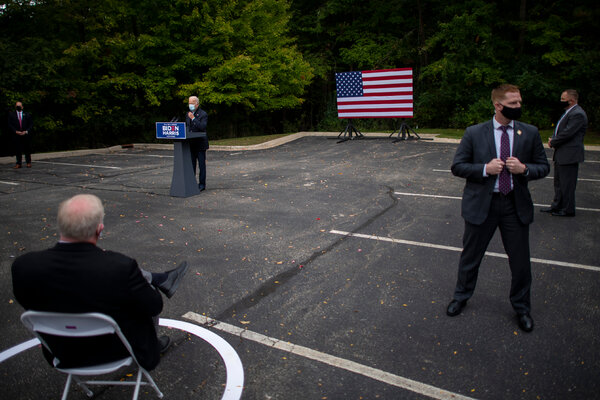 The Biden campaign’s decision to continue with a planned trip to Grand Rapids, Mich., on Friday after Mr. Biden tested negative raised its own questions, and threatened to undermine the former vice president’s message about putting health and safety above politics.

By continuing to campaign after having been exposed to an infected person — Mr. Trump — on Tuesday night, Mr. Biden is flouting an important rule in public health, experts said. So, too, is Vice President Mike Pence, who met with the president in the Oval Office on Tuesday and plans to continue campaigning.

According to the Centers for Disease Control and Prevention, anyone who has been in close contact with an infected person should “stay home (quarantine) since symptoms may appear two to 14 days after exposure to the virus,” and should “stay away from others.”

Dr. Michelson, the bioethicist, said of the former vice president, “I don’t see why it’s different for Mr. Biden, or Mr. Trump, or anybody else,” adding, “I think like he, like every other citizen, should abide by the C.D.C. guidance.”

Dr. Irwin Redlener, an expert in pandemic response at the Earth Institute at Columbia University who briefly served on a public health advisory committee for the Biden campaign, described himself as satisfied that Mr. Biden and Mr. Trump had stood sufficiently far apart on the debate stage and suggested that the Biden team shared that view.

“They believe they were following the rules and they’re not concerned about it,” he said, calling the Biden team “obsessive” about following safety precautions. But he also encouraged additional testing, saying of Mr. Biden, “He should be getting tested daily, and they should be just continuing to follow the guidelines — of Trump’s C.D.C., ironically.”

Ms. Sanders, the Biden adviser, said flatly that Mr. Biden “was not exposed” at the debate because he was more than six feet away from Mr. Trump. And Mr. Ducklo added that Mr. Biden and Mr. Trump “were never within what the C.D.C. considers to be close contact, and we are following C.D.C. guidance.”

At the debate, Mr. Trump and Mr. Biden, both maskless, stood about 12 feet apart from each other, double the distance the C.D.C. recommends. But indoors, especially in a crowded space and when someone is speaking loudly and at length, as Mr. Trump was, any virus released from the president’s mouth could have traveled much farther than six feet, other experts warned.

“There’s certainly a not insignificant risk,” said Linsey Marr, an expert in the airborne transmission of viruses at Virginia Tech.

In August, scientists said they had extracted live virus from the air at seven and 16 feet from an infected patient in a hospital room. “We know six feet is not a magical distance,” Dr. Marr said.

During the debate, Mr. Trump could have released 10 times as much virus as he would have by breathing alone, Dr. Marr said.

“The combination of the two factors makes Biden a close contact, even if the letter of the law doesn’t consider him one,” Dr. Marr said.

Mr. Biden tested negative for the virus twice on Friday, the Biden campaign said. He was not tested on Saturday and left his home for part of the day, going to a theater to participate in a virtual event and a church to attend Mass. The campaign announced his latest negative test result on Sunday night. Pressed on CNN about the frequency of Mr. Biden’s coronavirus tests, Ms. Sanders said the candidate was “tested before we travel.”

In the coming days, the Biden campaign is aiming to balance health precautions with continued travel in Florida on Monday and in Arizona on Thursday. Yet Mr. Trump’s positive test has plainly injected an extraordinary measure of uncertainty into the race.

“We only have a few weeks left to the election, and they want Joe Biden to have the ability to present himself to the American public,” Dr. Redlener said. “And the president’s recklessness has thrown things off track and the Biden campaign is frustrated by that.”

But whatever his travel schedule, Mr. Biden should be tested every day at least until Oct. 13, two weeks from the night of the debate, and probably even after that given his interactions with people on the campaign trail, experts said.

“Getting a negative test does not necessarily mean that you’re not infected,” said Juliet Morrison, a virologist at the University of California, Riverside. Early in the infection, the amount of the virus may be too low to trigger a positive result. “You have to keep being diligent, and assuming that you may have actually been infected, so you need to be testing on a daily basis,” she said.

A rapid test like the one used by the White House can miss infections, especially early on in the course of the illness. Mr. Biden should instead be given the more rigorous P.C.R. test, which can deliver results in a few hours when not delayed by bureaucratic logjams, said Virginia Pitzer, an epidemiologist at the Yale School of Public Health.

Mr. Biden’s campaign should make the results of those tests public as soon as they are available, she said: “Transparency is key.”