WASHINGTON —  As a cease-fire between Israel and Hamas came together late Thursday afternoon, White House officials who helped to mediate the agreement were divided over a crucial next step: Should President Biden make a public announcement?

The downside was that the planned halt in fighting, set to take effect at 7 p.m. Washington time, could fall apart, burning the president. The upside was twofold: presenting him as a peacemaker and publicly locking in the two sides, making it less likely that either one would shatter the plan with a last-moment strike.

Mr. Biden went ahead, making brief remarks about an hour before the cease-fire took effect in which he implicitly struck back at critics who had accused him of doing too little to bring the fighting to a swifter conclusion by boasting of his administration’s “intense diplomatic engagement” behind the scenes. The gamble paid off, as the agreement held and the cease-fire went into effect that night.

But now, having become the latest American president to walk the high-wire of mediating the long-running conflict between Israel and the Palestinians, Mr. Biden faces more challenges and risks ahead.

White House officials are debating how to recalibrate their approach, hoping to avoid another crisis that would further divert Mr. Biden’s attention from his top foreign policy priorities: China, Russia and restoring the Iran nuclear deal. In a reminder of Mr. Biden’s more expansive agenda, he met at the White House on Friday with South Korea’s president, Moon Jae-in, to discuss matters including Beijing’s growing power and North Korea’s nuclear program.

In the short term, Mr. Biden is taking steps to increase American engagement. Secretary of State Antony J. Blinken will visit the region early next week, and the State Department is dispatching a veteran diplomat, Michael Ratney, to lead the United States embassy in Jerusalem until Mr. Biden settles on his pick for the vacant ambassador post there, according to a person briefed on the plan.

It is unclear when Mr. Biden might select his ambassador, a task that several regional experts called urgent. Two people in touch with the White House on Israel affairs said they expected Mr. Biden to choose Thomas R. Nides, who served as a deputy secretary of state in the Obama administration. But the process of nominating and confirming someone to the post could take months.

Administration officials also plan to reopen a consulate in Jerusalem that had been Washington’s main point of contact with the Palestinians until it was merged into the U.S. embassy, which was relocated to Jerusalem under President Donald J. Trump, prompting Palestinian officials to refuse to do business there.

“The consulate used to be our eyes on the ground with the Palestinians in a moment of crisis. The Trump administration blinded the U.S. government by eliminating it, and it hurt the U.S. response in the lead up to this crisis,” said Ilan Goldenberg, a former Obama administration official who is now director of the Middle East Security program at the Center for a New American Security.

“The Biden administration had been working to reopen it. I now expect that effort to accelerate and have a much higher priority,” he added.

Mr. Ratney, a former deputy assistant secretary of state for Israeli and Palestinian affairs, served as the consul general in Jerusalem during the Obama administration, and could act as Washington’s conduit to the Palestinians in the meantime. 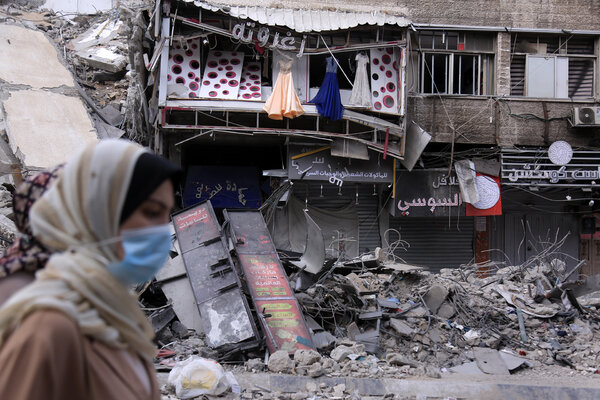 More broadly, Biden officials are weighing what approaches to take to de-escalating the conflict between Israel and the Palestinians. They have reached an early consensus on leading an international humanitarian effort for Gaza, one that Mr. Biden said on Thursday would be led by the Palestinian Authority, not the militants of Hamas, who currently rule the cramped Palestinian territory. In a Friday news conference with Mr. Moon, Mr. Biden added that it would be done “without providing Hamas the opportunity to rebuild their weapons systems.”

Administration officials hope to empower the more moderate Palestinian Authority, which they consider the only plausible partner for peace with the Israelis. The United States considers Hamas a terrorist organization.

The White House is also bracing for a new test of the relationship with Israel’s prime minister, Benjamin Netanyahu, when it comes to its efforts to restore the 2015 Iran nuclear deal, which Mr. Netanyahu and many other Israeli leaders strongly oppose as a threat to Israel’s security.

“Israel and the United States are going to have big things to work out, in particular Iran,” said Richard N. Haass, president of the Council on Foreign Relations. “Both men needed to maintain a working relationship so that if and when the Iran situation moved to the front burner they would be able to work together.”

The White House has promoted the administration’s role in brokering the cease-fire, and Mr. Biden’s careful management of Mr. Netanyahu, whose hold on his own job remains tenuous amid a political deadlock in Israel.

Throughout the diplomatic effort, Mr. Biden acknowledged Israel’s right to retaliate against Hamas’s rocket attacks after recent Jewish-Arab clashes within Israel. The president only increased pressure after more than a week of fighting, by which time, analysts said, the Israeli military was close to completing its military objectives.

“About 90 percent of the reason for the cease-fire is that both Hamas and the government of Israel determined that prolonging the conflict didn’t serve their interests,” said Mr. Haass. “This was a cease-fire that essentially was ready to happen.”

By some accounts, Mr. Biden was more influential, and at minimum avoided politically tempting actions that could have made matters worse. His tactic was to avoid public condemnation of Israel’s bombing of Gaza — or even a public call for a cease-fire — in order to build up capital with Mr. Netanyahu and then exert pressure in private at the right time, according to two people familiar with the administration’s internal debates.

“How does this end?” Mr. Biden pressed Mr. Netanyahu.

There is no question that, when diplomacy reached a key moment, Mr. Biden’s team played an important role in mediating the cease-fire.

At one point Thursday afternoon in the offices of the National Security Council, Jake Sullivan, Mr. Biden’s national security adviser, was on the phone with his Israeli counterpart, Meir Ben-Shabbat, while Brett H. McGurk, the council’s top official for Middle East affairs, was speaking with a senior official in Egypt’s government, which served as the U.S. intermediary with Hamas.

Both the Israelis and Hamas were seeking assurances from the other side that neither would launch a last-second attack before a cease-fire in an effort to claim a late victory. Mr. Sullivan and Mr. McGurk, still both on the line, passed messages between Jerusalem and Cairo in real time.

While such efforts paint a picture of a United States re-engaged in multilateral, peacemaking diplomacy, they were also a diversion from Mr. Biden’s many other priorities.

The White House, Ms. Wittes wrote, “needs to recognize that, while it would prefer the senior-level U.S.-Israeli conversation to focus on Iran and security cooperation, the president, national security adviser, and other national security principals will also have to devote time and attention to this issue if they want to avoid a continued slide that derails other priority regional goals.”

Administration officials have given no indication that they will change course and name an envoy charged with restarting an Israeli-Palestinian peace process in pursuit of a two-state solution, an outcome widely viewed as almost hopelessly beyond reach for now.

But on Friday, Mr. Biden affirmed that as his long-term goal, saying, “we still need a two-state solution. It is the only answer. The only answer.”