John Kavanagh, a Republican state representative in Arizona, recently ran through a list of what he called “bad election bills that were introduced by Republicans.”

One would have allowed the Legislature to overturn the results of a presidential election even after they had been certified. Another would have required that early ballots be dropped off only at drop boxes that are attended. A third would have repealed the state’s hugely popular permanent early voting list, which allows voters to receive a ballot in the mail for every election.

All three measures were also stopped by Republicans in Arizona, even as the party pushes other bills that would enact tighter regulations on early voting in the state — just a few months after President Biden became the first Democratic presidential candidate since 1996 to carry the Southwestern battleground.

This G.O.P. resistance to certain voting legislation reflects an awkward and delicate dance within the party: As state lawmakers loyal to former President Donald J. Trump try to please him and his supporters by enacting new voting limits across the country, they are facing pockets of opposition from other Republicans who argue that some of the bills go too far or would hurt their own voters.

These Republicans see themselves as moderating forces on bad bills. And they are instead proposing less stringent measures that they say will improve the efficiency and security of early voting now that so many more people are using it because of changes brought about by the coronavirus pandemic. They acknowledge, however, that their timing is bad. Pushing for any bill that includes new requirements for voting after an election that went more smoothly than many expected raises an inevitable question: Why now, if not to try to thwart Democrats?

The number of Republicans willing to speak out is modest compared with the many Trump-friendly lawmakers in G.O.P.-controlled state capitols who continue to validate the former president’s false claims of fraud by proposing harsh new voting measures. And even when other lawmakers in the party are successful in softening or stopping these, the outcome often remains new restrictions on voting — however small or subtle — that Democrats say are unnecessary and that are likely to disproportionately affect Black, Latino and poor voters.

But there is a difference between the public perception of these new laws and bills and the reality, Republicans say. Many of the most restrictive provisions have never made it past the bill-drafting phase or a legislative committee, halted by Republican leaders who say it is counterproductive to limit forms of voting that are convenient and that people in both parties prefer. (Republicans in states like Arizona have amassed such power in state legislatures in no small part because for many years their own voters embraced voting by mail.) And some Republicans have criticized as anti-democratic efforts to empower state legislators to reject the will of voters. 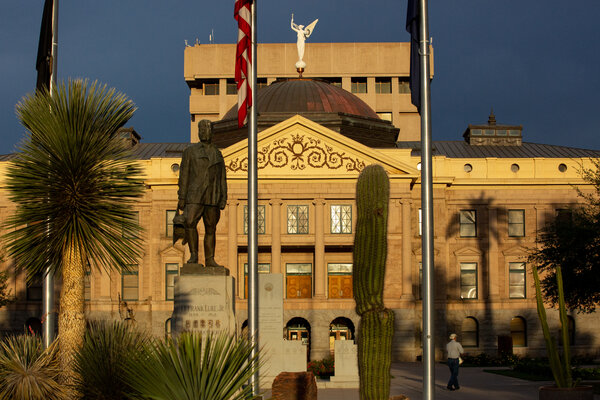 The latest Republican voting proposal to fall flat because of intraparty resistance was a “wet signature” requirement in Florida, which was set to be dropped from a bill that advanced out of a State Senate committee on Tuesday. The rule, which would have mandated a signature written by hand rather than a digital signature, was cut in part over concerns about its potential effect on older voters.

In Arizona, Mr. Kavanagh, a committee chairman in the state House of Representatives, noted that Republicans’ bill to allow the Legislature to overturn certified presidential election results had never even been assigned to a committee.

Neither was the proposed measure to repeal the permanent early voting list, which is how more than three million voters in Arizona get their ballots.

Mr. Kavanagh said the list was “tremendously popular with Democrats, Republicans and independents,” and therefore made no sense to do away with.

Most proposals like these — inspired by a misinformation campaign from Mr. Trump and allies like Rudolph W. Giuliani, who pressured Republican lawmakers to interfere with their state’s certification process — are dead, not just in Florida and Arizona but also in other states like Georgia, where Republicans set off a national uproar over voting rights. “But that part never got written, or was rarely covered in the newspapers,” Mr. Kavanagh said.

This year in Florida, lawmakers introduced legislation to ban drop boxes, limit who can collect ballots for other voters and restrict access to people in voting lines, among other provisions. The proposals were met with swift and forceful opposition from county elections supervisors, perhaps none whose opinion carried more weight than D. Alan Hays of Lake County. Mr. Hays, a conservative Republican who had previously served in the State Senate for 12 years, told his former colleagues at a legislative hearing last month that their bill was a “travesty.”

“In my role as supervisor of elections, I’m focusing on policy,” he said in an interview. “I don’t pay any attention to party. If it’s a good idea, we should give it every opportunity to succeed. And if it’s a bad idea, we should do everything we can to stop it from being implemented.”

He and other supervisors worked phones and emails to explain to lawmakers the nuances of how elections are run and why some of their provisions would be impractical. This month, after the controversy over Georgia’s new voting law, the Florida House softened its version of the voting bill; the proposal that ultimately passed out of the State Senate committee on Tuesday did not include some of the most stringent original provisions, like a ban on drop boxes (the availability of which it still limits).

“To their credit, the legislators have shown great appreciation and respect for our opinions,” Mr. Hays said.

Republicans who want to see changes to election law that would have far less of an impact on how votes are cast say that some of the proposals introduced by pro-Trump lawmakers are not helping. And these bills are muddying the waters, they say, in areas of the law like ballot security, where there used to be more bipartisan agreement.

Some Republicans say that in less polarized times, these measures wouldn’t be attracting nearly as much controversy because even divisive issues like requiring a form of identification to vote had some bipartisan support.

A 2005 bipartisan commission led by former President Jimmy Carter and James A. Baker, the former secretary of state under Ronald Reagan, recommended requiring identification for all voters, but allowed for a flexible interpretation of what that could be, like a utility bill. That report also stated what independent elections experts say is still true: that absentee ballots remain the most susceptible to fraud, though fraud is exceptionally rare. In the very few instances that fraud has been caught and prosecuted, as in North Carolina in 2018, it often involves absentee ballots.

Most Republicans argue that measures are needed to safeguard and streamline absentee voting, especially because it was so prevalent last year during the pandemic — and popular with voters.

In Georgia, Gabriel Sterling, a top Republican election official who bucked his party and Mr. Trump in December by denouncing claims of voter fraud as false and dangerous, said he didn’t agree with everything in the state’s new law. He took particular issue with the provisions that seem intended to punish his boss, Secretary of State Brad Raffensperger, a fellow Republican who also pushed back against Mr. Trump’s voter fraud lies, by stripping him of his voting power as a member of the State Election Board.

But Mr. Sterling said he believed that over all, “It is a boring bill,” adding: “It is not the end of the world.”

He argued that “there was going to be a cleanup bill” to address voting given that record numbers of people voted early and by mail for the first time, creating considerable strain on local elections officials. And he pointed to local elections jurisdictions that were overextended with large numbers of signatures to match on absentee ballots.

On the one hand, he said, the government can hire staff members and pay them $10 an hour to compare signatures. On the other hand, he said that requiring an I.D. number like the last four digits of the voter’s Social Security number or a driver’s license number, as Georgia now does, seemed more efficient. “You’re saying, ‘Does the number match?’” he said. “‘Does it not match?’ It’s a very simple thing.”

He blamed Republicans for trying to placate Mr. Trump’s supporters by introducing bills they knew would never pass — and which, in some cases, lawmakers didn’t fully believe were good policy. They just knew it was good base politics, he said.

“Essentially the leadership of the House and the Senate said to their members, ‘Introduce whatever you have to so your people are OK,’” Mr. Sterling said.

That was a mistake, Mr. Sterling added, but not necessarily surprising. “There’s a lot of voters who believe the lie, and we are a representative democracy.”