Philadelphia voters will soon hear a familiar election-year sound at their front door: the rap-rap-rap of a Democratic official canvassing for support. But the message they hear might take them by surprise.

After a monthslong effort to get voters to embrace mail-in voting, Democrats in Philadelphia will push supporters to vote in person if they have not already requested a ballot.

The sudden shift in tactics in the biggest city in Pennsylvania, a critical swing state, reveals unease over President Trump’s war on mail-in voting and a rash of court rulings that are still altering the regulations that will govern how ballots are cast and counted in November.

“The only secure thing is to walk to the polls, put your mask on, bring some hand sanitizer — just go vote,” said Bob Brady, a former congressman and the chairman of the Philadelphia Democrats. “This president is going to do everything he can to fight any state, or any city that has an overwhelming vote against him — and we will have an overwhelming vote against him. And we’ll be in his cross hairs.”

Democrats nationally have not abandoned their efforts to vote by mail, largely because their electoral fortunes are wedded to the process. Democrats vastly outnumber Republicans in absentee ballot requests in key battleground states; in Pennsylvania, nearly 1.5 million Democrats have requested a mail-in ballot, three times the requests from Republicans. Since Wisconsin began mailing absentee ballots on Sept. 16, nearly all of the state’s counties that voted for Hillary Clinton in 2016 have returned ballots at a higher rate than counties that backed Mr. Trump.

Many state parties and officials continue to view voting by mail as essential amid the coronavirus pandemic. Joseph R. Biden Jr.’s campaign is still encouraging its supporters to have a plan to vote and to know their options, and that includes voting by mail.

But the change in Philadelphia indicates that some voters are becoming increasingly worried about placing completed ballots in the mail — and that election officials are adjusting accordingly.

As the president falsely claims that mail balloting is rife with fraud, and as the election system has been overtaxed by the vote-by-mail surge, voters across the country have been left to navigate a confusing process. Not only are the rules still being litigated, disinformation from both foreign and domestic sources is also cluttering their social media feeds.

Democrats in Wisconsin said many voters were still requesting absentee ballots, but were increasingly worried about returning them through the mail.

In Madison, Wis., by far the state’s most Democratic stronghold, the city clerk’s office received so many phone calls from voters worried about the Postal Service that on Saturday it dispatched 1,000 poll workers to more than 200 city parks. Their job was to collect ballots in an event the city called “Democracy in the Park.”

“The volume was pretty incredible,” said Maribeth Witzel-Behl, the city clerk. “A lot of calls were coming in, voters saying, ‘I’ve got my ballot, I’ve got the envelope complete, but I am reluctant to put it in the mail.’”

Ms. Witzel-Behl, who attributed voter sentiment to “comments that have been made about voting by mail at the national level,” is planning another ballot-return event on Saturday, before the city’s 14 drop boxes are installed at municipal fire stations next week.

A grass-roots nonprofit group called #walkthevote has been organizing voting “parades” in a dozen states, including Michigan, Texas and Wisconsin. The events gather groups of voters to drop off their absentee ballots in person at elections offices or drop boxes. 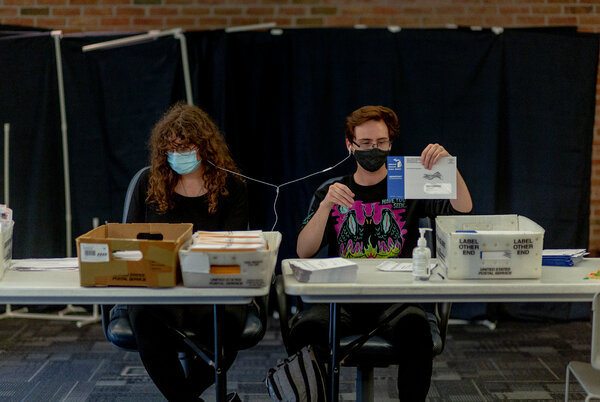 Kyra Harris Bolden, a Michigan state representative from the Detroit suburbs, is organizing half-mile marches on Sundays to deposit ballots in a drop box at City Hall in Southfield, Mich. For those who can’t get to a drop box, Ms. Bolden said, she is encouraging them to return mailed absentee ballots within 48 hours of receiving them.

What You Need to Know About Voting