Brexit: Jeremy Vine caller says UK should 'walk away' with no deal

In a private briefing, the Brussels diplomat claimed the Prime Minister was no longer asking for annual negotiations to decide post-Brexit fishing quotas. But he insisted the wrangling over fishing rights was far from over with both sides still “far apart” on access to UK waters and quota numbers. “Britain has accepted the EU demand that quotas can’t be negotiated annually,” an EU source said.

This comes after rumours of a potential breakthrough emerged last night but were swiftly quashed by Mr Barnier and Downing Street.

The Frenchman told MEPs he is struggling to reach an agreement on the period between future negotiations on fishing opportunities in British waters.

Britain has already rejected an EU proposal that would see talks held every day years. 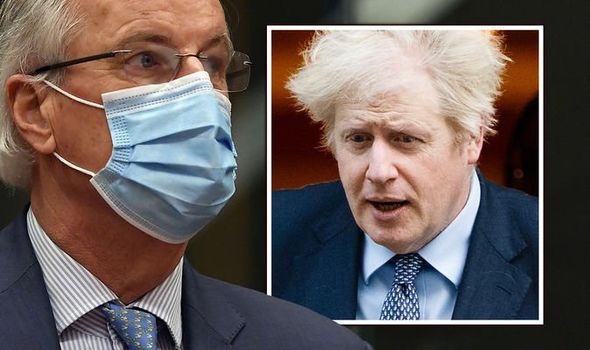 Mr Barnier suggested a possible compromise could emerge with discussions every three to five years in the future.

However, he warned the wrangling was still very much stuck because of a British “wish” to block EU access in its exclusive six-to-12-miles from its coast.

And both sides also are still yet to reach an agreement on future quotas.

In a seperate briefing with EU27 ambassadors, Mr Barnier said fishing talks were thrown into “disarray” by a fresh proposal by the UK that would outlaw so-called flag ships.

Downing Street wants boats fishing in its waters to be majority owned by British firms.