From Monday, it is understood that BBC Scotland will decide whether to televise the briefings based on “editorial merit” while continuing to stream them online. The briefings are currently shown four days a week live on both BBC One Scotland and the BBC Scotland channel, with some coverage also included as part of BBC Radio Scotland’s Lunchtime Live programme.

These will be scaled back as business at Holyrood is returns to a more normal schedule with TV listings for this week revealing that Bargain Hunt will broadcast from Tuesday.

Since the start of the pandemic, the briefings have attracted average audiences of 208,000 on BBC One whilst a longer version, on the BBC Scotland channel, has been watched by 40,000 people on average.

Mr Swinney said Thursday’s briefing provided a “good example” of this when more than 500,000 people downloaded the Protect Scotland app after it was launched. 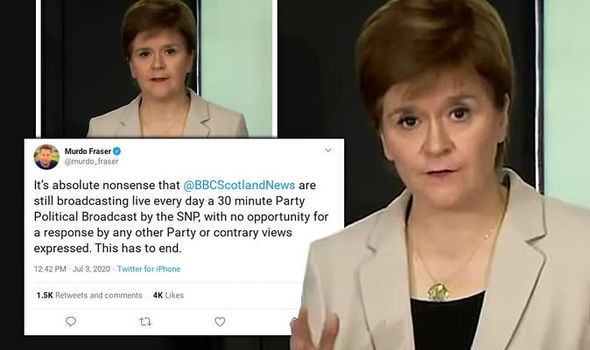 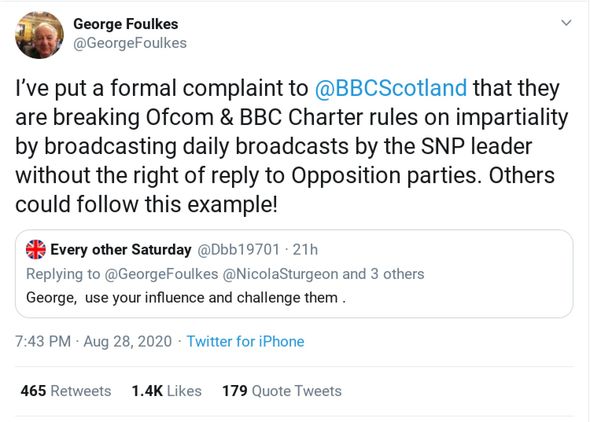 He added: “This communication is very important and I would encourage the BBC to continue to broadcast it.”

Donald Macaskill, the chief executive of Scottish Care, which represents care homes, said that switching off live broadcasts on mainstream TV was another example of age discrimination.

He said: “I’m very disappointed that in the midst of the largest public health emergency ever that BBC Scotland has decided to cut back coverage of the daily briefing.

“Older people, especially at this time depend on this info – yet another example of age discrimination during Covid-19.” 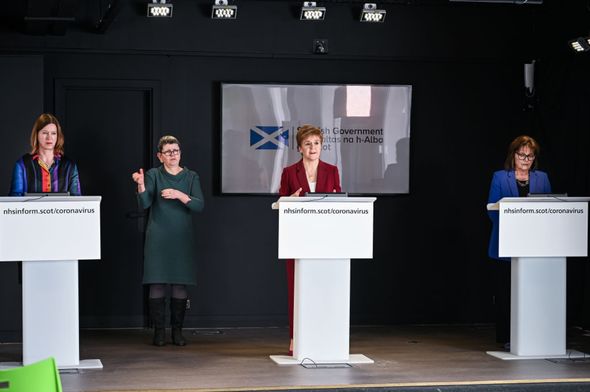 But Labour peer George Foulkes, who had complained to BBC Scotland about the briefings, welcomed the move, saying important information on the pandemic would still be shown, but without “party propaganda”.

Tory MSP Graham Simpson called the decision “excellent news” while his colleague Murdo Fraser said it was “not before time” after he slammed the briefings on Twitter.

An Age UK Scotland spokesperson, added: “The majority of older people primarily get their news from the TV so it is absolutely vital that they do not miss out and fall foul to a digital- by- default approach to public information and advice, which has become all too common recently.

“This is clear from the huge numbers of calls Age Scotland’s 0800 12 44 222 helpline receives immediately after major briefings as older people seek clarification and further information on what has just been announced. 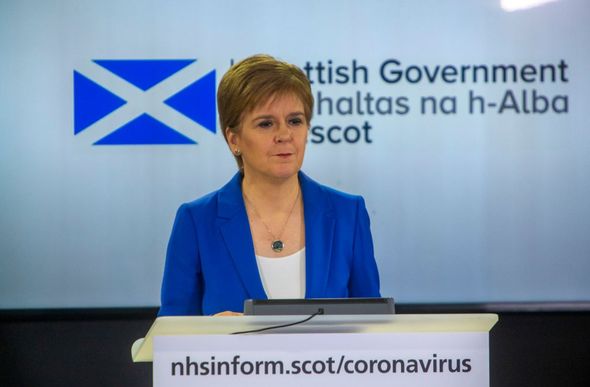 “While it is clear that live coverage is not going to disappear altogether, the BBC must assure older people, and the general public, that that they will be robust in their broadcast reporting and that screenings of briefings will continue regularly.

“It is important that the Scottish Government and BBC, as a public service broadcaster, work together to make sure this happens so that timely information is available as comprehensively as possible.”

A spokesman for the broadcaster said in response: “We will continue to provide extensive coverage of the Government press conferences across our news services, including live streaming online.

“We will of course consider showing press conferences live when any major developments or updates are anticipated.”

Adding of tomorrow’s briefing, they said: “By way of example, Monday (14th) sees the introduction of new restrictions in Scotland and we will cover the lunchtime briefing live, on TV, on BBC One Scotland and on the BBC Scotland channel in the same way that our colleagues in Wales will be covering the Welsh Government briefing that day.”