Joseph R. Biden Jr. directly appealed on Monday to voters who once supported Barack Obama but were drawn to Donald J. Trump in the 2016 election, visiting a foundry in northeast Wisconsin and accusing the president of turning his back on working people.

Mr. Trump was also looking to drum up support in the Midwest, flying to Ohio for rallies in the Dayton and Toledo areas as he tries to keep that state in his column this November.

In his latest trip to a Midwestern battleground, Mr. Biden traveled to Manitowoc, a city along Lake Michigan in a county that Mr. Trump won by 21 percentage points in 2016 — a drastic shift from 2008, when Mr. Obama won there by nearly eight points. (Mitt Romney narrowly won it in 2012.)

“I know many of you were frustrated,” Mr. Biden said at the Wisconsin Aluminum Foundry, offering a message to people who voted for Mr. Trump in 2016. “You were angry. You believe we weren’t seen — you weren’t being seen, represented or heard. I get it. It has to change, and I promise you this: It will change with me. You will be seen, heard and respected by me.”

The speech was Mr. Biden’s latest attempt to place himself squarely on the side of American workers while presenting Mr. Trump as catering to the rich. “The simple truth is that Donald Trump ran for office saying he would represent the forgotten men and women in this country,” Mr. Biden said. “And then once he got in office, he forgot us.”

The president seemed to be aiming as well at Obama-Trump voters, among others, using his Dayton appearance on Monday to accuse Mr. Biden of betraying American workers with his past support for “globalist” economic policies that he said had devastated the Midwest’s manufacturing base. The Obama-Biden ticket carried Ohio and many other Midwestern states in both 2008 and 2012. 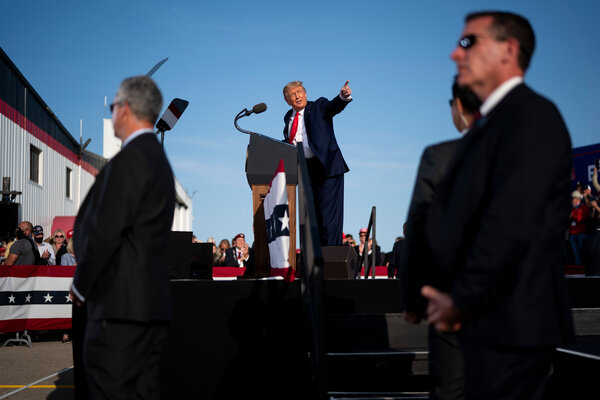 “For 47 years, Joe Biden shook the hands of American workers and then stabbed them in the back,” Mr. Trump said, citing Mr. Biden’s support for China’s entry into the World Trade Organization and his backing of the North American Free Trade Agreement.

“Joe Biden should not be asking for your support,” Mr. Trump said. “He should be begging for your forgiveness.”

The renewed focus on the economy, amid intense political attention on the sudden Supreme Court vacancy, offered Mr. Biden a chance to continue drawing contrasts between his own modest upbringing in Scranton, Pa., and Mr. Trump’s life of privilege — themes that were on display last week during a CNN town hall event and a speech in Minnesota. Once again, he played up a populist talking point by defending the fact that he did not have an Ivy League degree.

“You close the door on me because you think I’m not good enough — guess what?” Mr. Biden said. “Like all you guys, I’m going to bust down that door.”

Mr. Biden, a graduate of the University of Delaware and the Syracuse University College of Law, added: “I say it’s about time that a state school president sat in the Oval Office. Because you know what? If I’m sitting there, you’re going to be sitting there, too.”

The trip on Monday was Mr. Biden’s second to Wisconsin as the Democratic presidential nominee. In early September, he visited Kenosha in the aftermath of the police shooting of Jacob Blake and held a small event in Wauwatosa, a Milwaukee suburb.

Polls continue to show Mr. Biden with an edge in Wisconsin. A poll conducted by The New York Times and Siena College this month found him with a five-point lead over Mr. Trump among likely voters.

Mr. Biden also addressed the latest grim milestone in the coronavirus pandemic, with the death toll in the United States now at about 200,000. He criticized Mr. Trump for playing down the virus earlier this year, noting that the president has said he did not want to create panic.

“Trump panicked,” Mr. Biden said. “The virus was too big for him. All his life Donald Trump has been bailed out of any problem he faced. And with this crisis, a real crisis, a crisis that required serious presidential leadership, he just wasn’t up to it. He froze. He failed to act. He panicked. And America’s paid the worst price of any nation in the world.”

Wisconsin has an indoor mask mandate, and although it contains an exemption for political speeches, Mr. Biden wore a mask during his speech. His event was not open to the public — offering a clear contrast with Mr. Trump’s rallies, but also leaving him without the energetic audience that cheered on the president.

Mr. Trump, speaking outdoors to a crowd at the Dayton airport, rattled off statistics about the state’s job losses, “courtesy of Joe Biden.”

Mr. Trump also criticized Mr. Biden for supporting the 2015 Paris climate accord, which he called an “anti-America deal,” claiming that the pact would close “probably 25 percent of your companies” if he had not withdrawn from it.

President Trump’s expected announcement of a Supreme Court nominee will reshape the presidential campaign and draw intense attention to a handful of Republican senators.

Early voting for the presidential election starts in September in some states. Take a look at key dates where you live. If you’re voting by mail, it’s risky to procrastinate.