WASHINGTON — President Biden on Monday reversed his predecessor’s ban on transgender troops serving in the military, moving swiftly on a social issue as he broadly exerted the power of his office to prohibit discrimination against people based on their sexual orientation or gender identity.

With Lloyd J. Austin III, his new secretary of defense, and Gen. Mark A. Milley, the chairman of the Joint Chiefs of Staff, beside him in the Oval Office, Mr. Biden signed an executive order restoring protections put in place in 2016 by President Barack Obama that had opened up the ranks of the armed services to transgender people.

“What I’m doing is enabling all qualified Americans to serve their country in uniform,” he said from behind the Resolute Desk moments before putting his signature on the document.

The president’s action came less than a week after Mr. Biden began his presidency with another wide-ranging civil rights executive order directing the government to implement protections for lesbian, gay, bisexual and transgender people in the United States based on the Supreme Court’s decision in Bostock v. Clayton County this past summer.

That order revoked efforts by President Donald J. Trump to narrowly interpret that case. Instead, Mr. Biden’s administration will require all federal agencies to expand their understanding of the court’s ruling to protect L.G.B.T. people from discrimination in numerous areas, including housing, education, employment and health care.

The swiftness of the president’s move on transgender troops signaled a willingness by the new Biden administration to put its own stamp on Defense Department social issues. It follows an announcement from Mr. Austin on Saturday that he was ordering a review of how the Pentagon has been handling sexual assault issues.

Mr. Biden and the Defense Department leadership will also have to wrestle with a reckoning on race facing the Pentagon, which has long struggled to promote officers of color and only now has its first Black defense secretary in Mr. Austin. It also has a history of downplaying white nationalism in its ranks, an issue it is making new moves to address as it confronts a stark fact: Close to one in five of the protesters arrested in connection with the breaching of the Capitol on Jan. 6 — many of them with links to white supremacist organizations — have ties to the American military.

Advocates for L.G.B.T. people praised Mr. Biden’s early efforts to reverse Trump administration policies, including ending the ban on transgender service in the military, and to shift American policy on the treatment of people who have historically been the subject of discrimination.

“This level of engagement is a pivotal moment for the movement for justice and a marked shift from the previous president,” said Alphonso David, the president of the Human Rights Campaign, the nation’s largest L.G.B.T. rights group. “President Biden has met the moment and proven himself a leader aiming to change and improve our nation’s culture.”

Critics of Mr. Biden’s actions were quick to denounce the reversal of the ban on Monday.

“Another ‘unifying’ move by the new Administration?” Senator John Cornyn, Republican of Texas, said in a Twitter post in which he linked to news reports on the executive order.

The lifting of the transgender ban could come under fire in Congress — as it did in 2017 before Mr. Trump reinstated it. At that time, leading Christian conservative groups pressed the president and Republican lawmakers not to spend federal money on transgender medical costs. Others have argued that allowing transgender troops could harm morale or combat readiness. There are no official numbers for transgender troops, but researchers have estimated that it is in the low thousands.

The Pentagon position on L.G.B.T. issues has evolved over time. Openly gay Americans were not allowed to serve until 2011, when Mr. Obama ended the “don’t ask, don’t tell” policy put in place by the Clinton administration in 1993.

Mr. Biden has long embraced a more expansive view of gay and transgender rights than some in his party. In 2012, his public declaration of support for same-sex marriage helped push Mr. Obama to take that position. During the 2020 campaign, Mr. Biden vowed that, if elected, he would quickly roll back Mr. Trump’s restrictions on such rights.

A Gallup poll taken in the summer of 2019, after Mr. Trump banned transgender service in the military, showed that 71 percent of all Americans disagreed with that action. But among Republicans, a slight majority supported keeping transgender people out of the military.

But fulfilling that promise does not come without political risk for the new president and his party, which has only narrow majorities in the House and Senate.

An aggressive push by the White House to empower and defend transgender people could undermine the re-election prospects for Democrats in conservative districts or states, where support for such policies is lower than it is nationally.

The executive order Mr. Biden signed on Inauguration Day will push the federal government further into the issue than ever before. In addition to prohibiting employment discrimination against transgender people, the new rules will direct agencies to crack down on discrimination in K-12 schools, universities and vocational programs.

The rules also prohibit someone from being refused a rental property because they are transgender, and will require federally funded health facilities to treat transgender people in the same manner that they do others. A transgender person cannot be denied credit because of that status under the new rules.

The White House announced the end to the ban on military service as Mr. Biden met in the Oval Office with Mr. Austin and General Milley. It was Mr. Biden’s first meeting with his senior Defense Department leadership since his inauguration.

Under the new rules, transgender people who are qualified to serve must be allowed to enlist. The order directs the military services to immediately begin identifying the records of transgender troops who had been discharged or denied re-enlistment on the basis of gender identity; their military records will be corrected, officials said.

“Simply put, transgender service members will no longer be subject to the possibility of discharge or separation on the basis of gender identity,” a statement released by the White House on Monday said. It said that transgender service members would be able to “serve in their gender when transition is complete” and that their gender would be recorded in the Pentagon’s reporting system.

“Transgender service members should know that they are accepted throughout the U.S. military,” the statement said.

The move was expected, as Mr. Biden had indicated in November that he would work to restore Obama-era protections for transgender people. 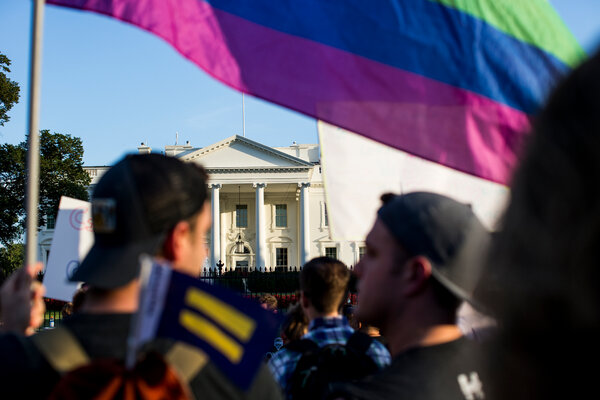 At the Pentagon, officials said they welcomed the action, and indicated that the department would begin implementing it quickly. “The department will immediately take appropriate policy action to ensure individuals who identify as transgender are eligible to enter and serve in their self-identified gender,” Mr. Austin said in a statement. “No one will be separated or discharged, or denied re-enlistment, solely on the basis of gender identity.”

Mr. Austin said Mr. Biden’s executive order would “ensure all medically necessary transition-related care authorized by law is available to all service members,” which would remove a big stumbling block to transgender men and women seeking to join, or remain in, the military. He also promised to re-examine the cases of all transgender service members who are currently being forced out of the military.

Senior military leaders, for their part, reacted on Monday with some relief that the Pentagon would not have to continue defending the contentious ban — which spawned a number of lawsuits around the country — in courts. While military officials have declined to speak publicly about the issue for fear of wading into politics, General Milley said during his confirmation hearing in 2019, when asked about the transgender issue, that “I do not believe there is anything inherent in anyone’s identity to prevent them from serving in the military.”

Advocacy groups who had been fighting the ban since it was announced three years ago — in a tweet from Mr. Trump — have argued that the Pentagon did not need to spend months studying how to allow transgender people to serve because it had already done so. One such group, the Palm Center, said in a policy memo last summer that the military could reopen to transgender people rapidly if ordered to do so.

“A big ship can take time to turn around, so often the Pentagon needs to study policy changes and move cautiously,” Aaron Belkin, the director of the Palm Center, said in an interview in July. “But this is the rare case where, since the military left inclusive policy for already-serving transgender personnel in place even as it implemented its ban, the switch is just waiting to be flipped.”

Others argued that it was Mr. Trump’s ban, not Mr. Biden’s reversal of it, that had been ill-considered.

“Every American with the skills and qualifications who meets the high standards to serve in our military deserves that opportunity. And every service member deserves to be treated with dignity and respect,” Senator Jack Reed of Rhode Island, the top Democrat on the Senate Armed Services Committee, said in a statement Monday. “Donald Trump’s efforts to restrict service by transgender persons wasn’t rooted in facts or sound personnel policy. It was driven by politics, not national security.”