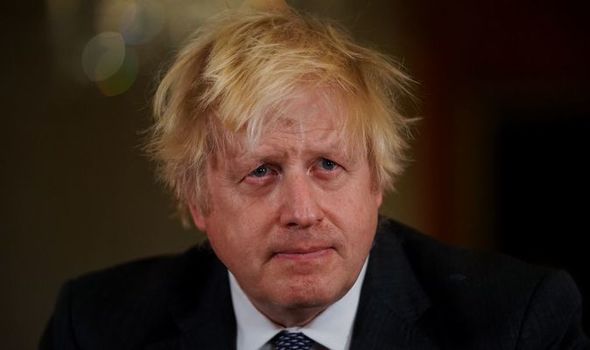 Downing Street officials are now warning that “nothing has been ruled out” in terms of extra restrictions being imposed. The Government’s Sage advisers want a ban on indoor mixing and indoor hospitality brought in before the New Year.

They have warned that a vote on another clampdown will spark a massive Commons rebellion.

While Downing Street has insisted “it is too early to talk about circuit breaks and lockdowns”, London mayor Sadiq Khan yesterday declared a major incident for the capital due to the staff shortages. New national figures show 90,418 Covid cases and 125 deaths were recorded yesterday, compared to 54,073 cases and 132 deaths last week.

The number of confirmed Omicron cases jumped by 9,969 in a day to reach 24,968 by Friday evening, the UK Health Security Agency said.

The number of those dying with the variant rose to seven, while hospital admissions climbed by 20 to 85, recent figures from Thursday showed.

Leaked minutes from a meeting of SAGE warn that restrictions are needed “very soon” to avoid hospitalisations rising to 3,000 a day.

They want fresh measures brought in before January 1.

“The timing is crucial,” said the minutes, seen by the BBC. “Delaying until 2022 would greatly reduce the effectiveness of such interventions.”

By Friday, 27,156,276 people had received a booster jab, 47.2 per cent of those aged 12 or over. But last night, a nurse self-isolating after testing positive warned that NHS workers are “demoralised” by staff shortages that have closed some hospital beds.

The 28-year-old, who did not want to be named, said that staff have been redeployed to fill gaps in other departments “for months” due to self-isolating, but the situation has “acutely” worsened in recent weeks.

With Whitehall officials working on a range of plans to combat the spread of the variant,

Boris Johnson has been warned that he will face an even bigger rebellion than the 101 Tory MPs who voted against vaccine passports last week if he tries to introduce another lockdown.

And there were signs of increased public resentment over the restrictions, with a demonstration in Parliament Square against Covid passports for venues yesterday.

The new rules were evident outside the Premier League fixture between Leeds and Arsenal yesterday, as players and fans had their “passports” checked.

Meanwhile, a petition calling for a referendum on abolishing the Coronavirus Emergency Powers Act has now reached 100,000 signatures. However, Professor Neil Ferguson, whose original claims last year led to the first lockdown, yesterday warned that Omicron could lead to 5,000 deaths a day based on his modelling.

His findings were used as evidence by groups pushing for the Government to have a two-week circuit break early in the New Year, even though the same policy failed inWales last year.

The circuit break, which is being considered by ministers, would include pubs and restaurants only being able to serve customers outside, households being banned from mixing, only six people allowed to gather and people being ordered to work from home.

Some sources have suggested schools could be delayed going back for two weeks, with most currently set to return on January 5. Government adviser Stephen Reicher, a member of the SAGE group, yesterday said the most effective way to stop the spread of Omicron would be to start a circuitbreaker this week.

A Downing Street source called for calm, saying: “There are people working on all sorts of plans inWhitehall but that does not mean they will happen.”

It is understood the key factor will now be the number of hospitalisations and deaths related to Omicron before Mr Johnson makes a decision.

Today’s Cobra meeting will focus on ensuring the country is still able to operate and fill key jobs, with thousands of people currently off work after testing positive for Covid.

Sadiq Khan has declared a major incident in London due to the rising number of cases in the capital .

After a meeting with council leaders and fire chiefs, he said: “In the last 24 hours we have had the largest number of new cases since the pandemic began.

“Hospital admissions are going up and also staff absences, so I have taken the decision to declare a major incident.”

However, calls for action are likely to be resisted by far more MPs. Many believe the Government has failed to make the case that Omicron poses a public health danger and believe the damage caused by a lockdown to the economy and society is a much greater problem.

A senior MP last night said the 101 MPs who rebelled last week are only a fraction of those opposed to the measures: “The rule of thumb is you can double that number. A majority are now opposed to further restrictions and Boris will have to look to Labour again to get restrictions through if that’s what he wants to do.”

Another senior party figure added: “Boris is not listening to the clear message from his own MPs.”

Sir Graham Brady, the chairman of the 1922 Committee, which represents Conservative backbenchers, warned: “The public have lost patience with excessive restrictions. There is no evidence that they are needed to protect people or are providing any benefit – while they are destroying lives and opportunities.”

Shipley MP Philip Davies described Government policy as “complete madness”. He said: “I think they have lost the plot. Boris may as well just hand over the keys to Chris Whitty and the public health fanatics who are just looking at the virus but not taking into account the wider impact on the economy, jobs, mental health and society.” Former cabinet minister Esther McVey said: “If the Prime Minister is contemplating passing more arbitrary laws to restrict people’s freedoms I’d advise him to think again. That would be totally unacceptable to me, to many of my colleagues in Parliament and to huge numbers in the country “.

“It would make a mockery of so many people being fully vaccinated.”

Red Wall MPs Christian Wakeford and Brendan Clarke-Smith argued the PM should consider the holidays as a circuit break, because schools are closed and many people are at home.

MP Lee Anderson said he would not vote for ‘circuit -breaker .

He said: “I’ve been out and about in my constituency this morning and people have all had their double-jabs, many have had three. They have done everything that’s been asked of them and they just want to get on and live their lives now’.”

Covid restrictions are also now likely to be debated in Parliament after a petition calling for a referendum on repealing the Coronavirus Emergency Powers Act passed 100,000 signatures.

Celebrity backer Chris Pack – ham, of BBC Springwatch, said: “A public vote is needed on the issues. It is better for these issues to be discussed through the democratic process of a referendum.” Queen guitarist Brian May, 74, has had “a truly horrible few days” after getting Covid.

Sharing a photo of a lateral flow test he urged people to take care. He wrote: “I’m OK. Please take extra care out there.”