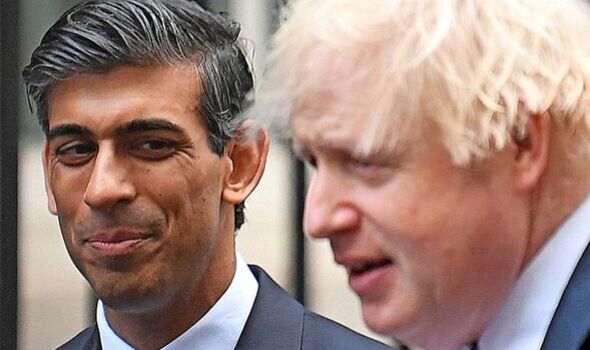 The PM faces the penalty after attending the event for aide Lee Cain, it was claimed last night.

Alcohol was drunk by some at the party on November 13, 2020, but it is not known if Mr Johnson had a drink.

However, it is claimed that he stayed at the gathering for some time.

A report by top civil servant Sue Gray will be critical of Mr Johnson’s attendance, increasing the likelihood he will receive another fine.

A source close to the Partygate inquiry said the June 2020 birthday party for which the PM has already been fined £50, and which he attended for less than 10 minutes, is far less serious than Mr Cain’s leaving party.

He said Mr Johnson was “frankly embarrassed. He appreciates that what happened was indefensible.” Rishi Sunak reportedly had to be talked out of quitting as Chancellor after he was fined, but relented as the move may also have taken down the PM.

A source said: “Rishi’s view is he was just there for a meeting. “Now he’s getting humiliated. He’s a man of honour and he genuinely is thinking about whether he can still be part of this.”

News of the fines prompted Lord Wolfson to quit as justice minister over the “repeated rule-breaking” in Downing Street.

Writing to Mr Johnson, the peer said: “The scale, context and nature of those breaches mean it would be inconsistent with the rule of law for that conduct to pass with constitutional impunity, especially when many in society complied at great personal cost.” Tory MPs also urged the PM to quit. Nigel Mills said: “In all conscience I don’t think he can survive or should survive, breaking the rules he put in place.”

Craig Whittaker said: “I not only think that the Prime Minister should resign but I also think that Rishi Sunak should resign as well.” But he added he would not submit a letter of no confidence to the 1922 Committee of backbench Conservative MPs.”

Former Brexit Secretary Lord Frost said the PM has the best “leadership capabilities” to defeat Labour at the next election and he expected him to stay for at least two more years.