The Prime Minister has a crisis on his hands as MPs prepare to revolt over his new coronavirus laws to fight the invisible killer disease. Mr Johnson is under pressure to give Parliament the opportunity to debate and vote on future restrictions, with more than 50 Tory MPs threatening to rebel.

He said: “Labour has drawn level in the opinion polls, and more voters consider Labour leader Keir Starmer to be best suited for the job of prime minister.

“The bull in the china shop might soon discover he’s being handed a bill for everything he broke.” 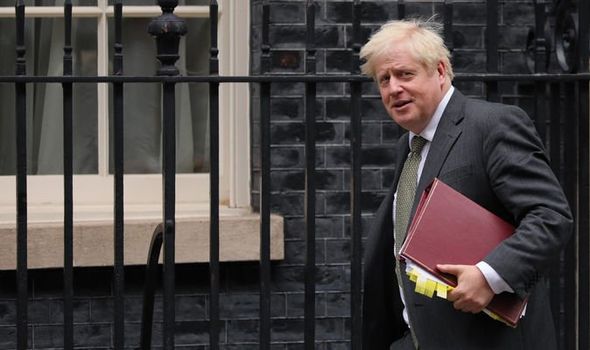 Mr Rahman said the relationship between Mr Johnson and his MPs had been “badly damaged”.

He said: “There’s a reason Boris Johnson shows little respect for the traditional rules of the political game.

“After all, it’s the British prime minister’s bull-in-a-china-shop approach that got him where is today.

“But while Johnson and his advisers seem to believe the prime minister’s governing style will continue to pay electoral dividends, the diminishing returns of repeatedly breaking with UK institutions and their long-established rules are now coming into sight.”

Writing for politics news site Politico.eu, he added: “Johnson’s style has provoked a series of rebellions by Tory backbenchers who feel he treats them, and parliament as a whole, with contempt.

“A serious cross-party revolt, backed by more than 50 Tories, threatens to defeat the government Wednesday when MPs will demand the right to approve national restrictions in advance.

“Although Downing Street is belatedly trying to woo Tory MPs, the relationship has been badly damaged.”

His remarks the House of Commons prepare to vote on Wednesday on whether to renew the powers in the Coronavirus Act, but there are calls for ministers to consult Parliament before introducing new curbs on people’s freedoms.

But, according to reports in both the Guardian and the Times, there are question marks over whether Commons Speaker Sir Lindsay Hoyle will put Sir Graham Brady’s amendment – which has enough support to overturn the Prime Minister’s majority – to a vote.

It comes after tougher restrictions banning people from mixing with other households in any setting were introduced on Monday night in large parts of north-east England due to a continued sharp rise in coronavirus cases.

Health Secretary Matt Hancock announced existing measures – for Northumberland, Newcastle, North and South Tyneside, Gateshead, Sunderland and County Durham – are being tightened at the request of local councils because the virus is still spreading.