The Prime Minister repeatedly refused to be drawn on how he would respond to Nicola Sturgeon’s party winning a majority in the Scottish Parliament elections. Votes are currently being counted north of the border, with the result said to be on a knife-edge as to whether the SNP will take overall control of Holyrood.

Asked what the outcome would mean, he told reporters: “Well, let’s see what happens in the course of the next few hours.”

He repeated his answer when asked if he would take legal action against the Scottish Government if Ms Sturgeon pressed ahead with a new independence vote without the consent of Westminster.

The answer marked a change of tone from Mr Johnson who up to now has always said he would refuse a new vote, describing it as a “once in a generation” issue.

However, speaking this afternoon, he added he continued to believe Brits did not want a referendum to be held “right now”. 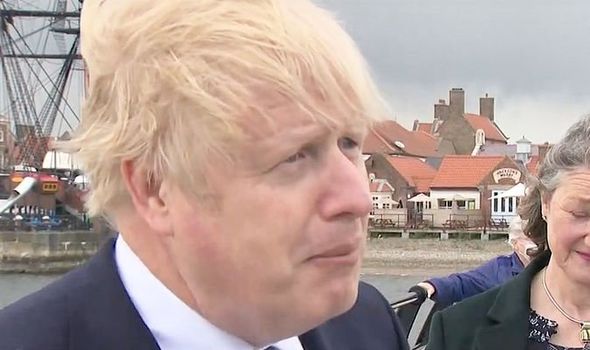 He said: “My general view is what the people of this country want to see is politicians of all kinds in Scotland and in Wales and in Northern Ireland – across the whole of the UK – working together to bounce back strongly from the pandemic.

The SNP election manifesto said it would hold a new referendum by 2023 if a majority of pro-independence MSPs were elected.

The Scottish political system is designed to avoid any single party having overall control of parliament,  but the SNP are hopeful of securing a majority.

Ms Strugeon fell just four seat short of the threshold at the last election in 2016.

The Green Party also supports Scottish independence and secured five seats last time round at the ballot box, giving parties in favour of splitting from the UK a majority of one.