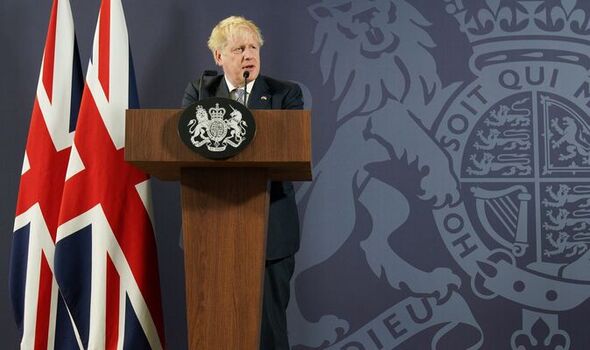 He said Britain was willing to assist too with de-mining operations off Ukraine’s southern coast. Britain may also offer insurance to ships to move millions of tons of grain stuck in the country.

The Prime Minister said: “I don’t want to get into the technical or military details.

“But you can take it from what we have already done in supplying equipment to the Ukrainians to help themselves that we are certainly talking to them at a technical level to help de-mine [the Black Sea port] Odesa.”

Mr Johnson said there is a “moral case” for the West to act quickly because of Russia’s barbaric blockade of Ukraine’s ports.

Although naval forces are not allowed to enter the Black Sea, the PM refused to rule out UK troops helping out in the future.

Ukraine has been described as the “bread basket of Europe” and was one of the world’s largest exporters of wheat, corn and sunflower oil.

But Vladimir Putin’s invasion and Moscow’s mining of the access to southern ports, including Odesa, has halted much of that flow and endangered world food supplies.

The blockade means 23 million tons of grain has been left to go mouldy in Black Sea ports.

Speaking to journalists on his way to a Commonwealth summit in Rwanda, Mr Johnson vowed to do “whatever we can” to get the grain out of the war-ravaged country.

Asked if British forces could be put in danger to the get grain out, he said: “There is a very strong moral case for trying to get the grain from Odesa. It is 23 million tons. Basically it is going off.

“Some of the poorest countries in the world absolutely depend on supplies of grain from Ukraine “We need to do whatever we can to get it out.”

Earlier, the PM talked of efforts to beat the blockade. He said: “There is a job of work to be done. We are working with the Turks and other European friends and allies to see what we can do.

“What the UK possibly has to offer, most of all, is expertise when it comes to maritime insurance, and a lot of expertise in moving goods through, should we say, contested areas of the sea.”

Any project to clear mines off Ukraine would take several months. 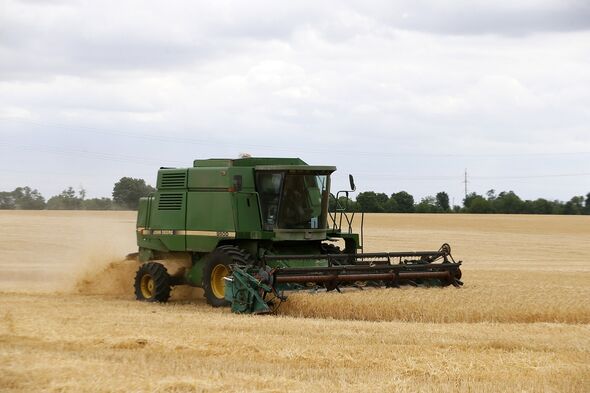 In Turkey, Foreign Secretary Liz Truss yesterday warned that the grain crisis must be solved by global leaders within the next month to save the world from “devastating consequences”. Ukrainian farmers will begin harvesting their grain crops this month and the Foreign Secretary accused Russia of “weaponising hunger”.

Speaking at a press conference alongside Turkish Foreign Minister Mevlut Cavusoglu in Ankara, Ms Truss warned: “Putin is using food security as a callous tool of war. He has blocked Ukrainian ports?holding the world to ransom.

“I’m here in Turkey to discuss the plan to get the grain out, supported by the United Nations.

“We’re clear that commercial vessels need to have safe passage to be able to leave Ukrainian ports.” World leaders are considering alternative ways to export food from Ukraine, including by road and rail, but it will be difficult to make up for the shortfall caused by the Black Sea blockade.

Mr Johnson will today pledge £372million in aid to provide immediate and longer-term relief to countries on the frontline of the global food crisis.

He said: “While Vladimir Putin continues his futile and unprovoked war in Ukraine and cravenly blockades millions of tons of grain, the world’s poorest people are inching closer to starvation.

” It was right, he said, “that we step up to support countries on the front lines of conflict and climate change, where an increase in the price of bread can mean the difference between a child living or dying”.

Mr Johnson also told reporters that there is now a lot of “Ukraine fatigue” in the world.

He said: “I think it is very important that we give the Ukrainians strategic endurance because it could be a very difficult time?I know they are going to win?But they need to be properly supported.”