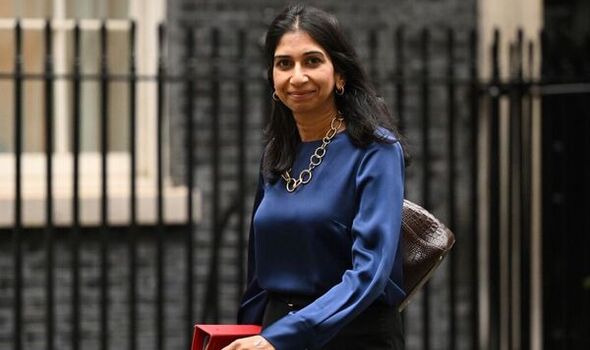 In a victory for the Daily Express Safer Streets campaign, Home Secretary Suella Braverman has supported calls for a specific criminal offence of public sexual harassment to be introduced, insisting every woman should “feel safe to walk our streets”.

The proposed legislation would ramp up the maximum time behind bars from six months to two years.

Public sexual harassment is already illegal, but does not exist as an offence of its own. Officials hope that by creating a new offence, more women will come forward to report their experiences.

MPs yesterday heard that every woman can tell stories of times when they were harassed in public. Conservative MP Jackie Doyle-Price told the Commons trains and buses were “like a war zone” for girls and “one of the worst places to be”.

Home Office minister Sarah Dines said: “Why should a woman have to let her friends know, or a young man have to let his friends know, which route they’re going to take home? And when she or he intends to arrive? Why should she in particular have to hold her keys in her fist? It is the most basic responsibility of Government to keep our public places safe.”

Former Home Secretary Priti Patel launched a consultation to gather evidence from police, women’s groups and lawyers about whether a new, specific offence was needed.

She said: “Every woman should feel safe to walk our streets without fear of harassment or violence.”

The Daily Express has campaigned for public sexual harassment to be made a specific criminal offence in a bid to help make Britain’s streets safer for women.

The Bill would specify a new offence, applying to anyone who committed a crime under the existing definition of “intentional harassment, alarm or distress” on the basis of the victim’s sex.

This covers “threatening, abusive or insulting” words or behaviour, such as catcalling, as well as writing on display.

Mr Clark told the Commons the real purpose of the Bill was to “help change the culture of society” to make sexual harassment unacceptable.

Gemma Tutton, of Our Streets Now, said: “Today marks an important step in tackling public sexual harassment in the UK – one of the most common, yet often ignored and belittled, forms of violence against women, girls and marginalised people.”

Assistant Chief Constable Charlie Doyle, of British Transport Police, said: “We know that all forms of sexual harassment are under-reported to police.

“I hope this increased awareness will encourage more victims to come forward.”

No help from the police as I was followed

An undercover female journalist says she is stunned by the “extent of predatory behaviour I experienced”.

Ellie Flynn posed as alone and drunk at night in Liverpool and London.

In the Channel 4 documentary a man followed her into her hotel bedroom. He left after she sternly challenged him as an obviously sober person.

“Drunk” Ellie was also followed by two men as she tried to find her pals in London’s Leicester Square.

Ellie, above, added her plight was ignored by officers. She said: “Despite the police’s protestations that tackling violence against women is a ‘top operational priority’, my experience suggests that little is being done by officers on the streets to actively look out for anyone vulnerable to sexual predators on a night out.”

A poll for Channel 4 found one in four women have been raped or sexually assaulted during a night out.

Undercover: Sexual Harassment – The Truth is on Channel 4 on Monday at 10pm.