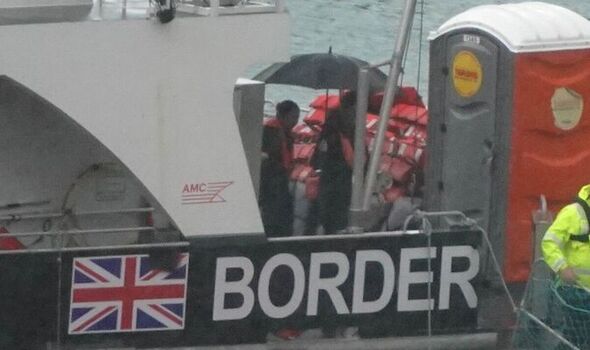 Suella Braverman is today touring immigration centres in Kent in a bid to get a grip on the crisis. The under-fire Home Secretary visited Western Jet Foil in Dover this morning before heading to Manston near Ramsgate this afternoon.

The former attorney general, who is a darling of the Tory right, has been criticised for dangerously overcrowded conditions at the Manston processing centre and a failure to tackle Channel crossings.

Around 3,500 people are being detained for weeks at the site intended to hold 1,600 for a matter of days.

Meanwhile, almost 40,000 migrants have made the dangerous crossing from France this year and the daily cost to the taxpayer for housing them in hotels is an eye-watering £6.8 million.

A No 10 spokeswoman said: “The Home Secretary is visiting Western Jet Foil and Coastguard HQ in Dover this morning.

“She’ll meet with Border Force staff and military personnel to discuss operations in the Channel, she’ll then be in Manston this afternoon where she will speak with staff and receive an update on the situation on the ground.”

Ms Braverman spent around half an hour at the facility in Dover, where migrants are first taken after arriving on the south coast.

The site was the scene of a petrol bomb attack on Sunday amid mounting tensions.

Ms Braverman was shown around by Border Force staff and briefly boarded a docked patrol vessel before meeting the Dover coastguard.

It comes after the Home Secretary sparked a backlash earlier this week when she said there was an “invasion on our southern coast” during a heated Commons debate.

But he blamed the crisis on an “unacceptable surge” in small boat crossings, adding that the “system is struggling to cope”.

Four parliamentary committee chiefs have piled further pressure on the Home Secretary to explain how the Government will get a grip on both the situation at the Kent facility and the migrant crisis in general.

Meanwhile, the prime minister of Albania hit out at the UK for singling out Albanian asylum seekers after their numbers crossing the Channel spiralled.

Prime Minister Rishi Sunak has described the migrant crisis as a “serious and escalating problem” and admitted that “not enough” asylum claims are being processed, but insisted the Government is getting on top of it.

It comes after Express.co.uk revealed talks are underway with Belize, Peru and Paraguay to strike Rwanda-style deals.

A senior Whitehall source said: “We have other talks going on, Paraguay is the most advanced at the moment.

“We have to break the business model of the people traffickers and we can only do that if the people they are bringing over understand that their final destination will not be Britain.”

Downing Street did not deny the Government was trying to negotiate the deals.

A No 10 spokeswoman said today: “We do plan to negotiate similar deals with other countries, akin to the Rwanda partnership, but it’s not helpful for us to comment on speculation around potential discussions.”

So far the controversial plan to send asylum seekers on a one-way ticket to Rwanda has been grounded due to legal challenges.