Brexit trade talks with the EU will continue today, alongside emergency talks over Boris Johnson’s controversial plans to modify parts of the Withdrawal Agreement (WA), the Brexit deal he signed with the EU in January. European Commission President Ursula von der Leyen is furious at the move and the bloc is considering taking legal action against the UK, if it goes ahead with altering the agreement.

A European Commission spokesman said: “The EU seeks clarifications from the UK on the full and timely implementation of the Withdrawal Agreement.”

It appears the EU is also preparing to take legal action against the UK.

An official document seen by Bloomberg, states: “The European Union is studying the possibility of legal action against the UK over Prime Minister Boris Johnson’s plans to breach the agreement governing Britain’s withdrawal from the bloc.” 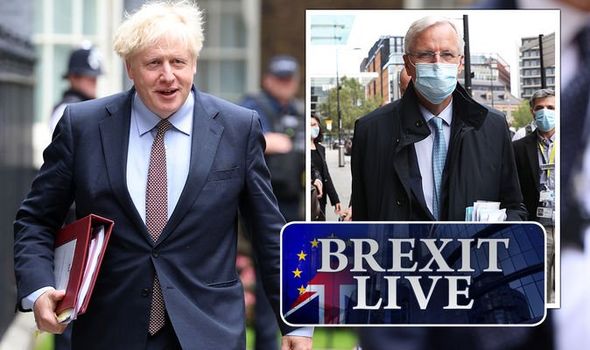 The document concludes that Mr Johnson is committing a “clear breach of substantive provisions” in the Northern Ireland Protocol.

Once the transition period ends on December 31 the EU could also trigger the dispute settlement mechanism, with the possibility of financial sanctions, according to the newspaper.

It comes as a Government Brexiteer urges the Prime Minister to walk away from the current trade talks with the EU, which are currently in their eight round.

The insider told Playbook: “We are at the point where unless European leaders tell Barnier to change his position, we are better off walking away.

“Becoming an independent country on Australian terms is a far better outcome than what they are willing to offer. This has been obvious since the summer.”