Speaking in the Irish parliament, Micheal Martin said there was a 50 percent chance the European Union and Britain can clinch an agreement before the end of the year. He said: “At the moment we are on the precipice of a no-deal. “It remains to be seen how the principals – Prime Minister Boris Johnson and President of Commission Ursula von der Leyen – can rescue the situation in their talks this evening.”

The Irish premier’s warning comes ahead of a crunch dinner meeting between Boris Johnson and Ursula von der Leyen.

The pair are set to be ready to hammer out political compromises over the main sticking points – the so-called level playing field and future fishing rights – in the trade talks.

But this morning Mr Johnson insisted he wouldn’t sign up to any agreement that doesn’t respect Britain’s status as an independent state. 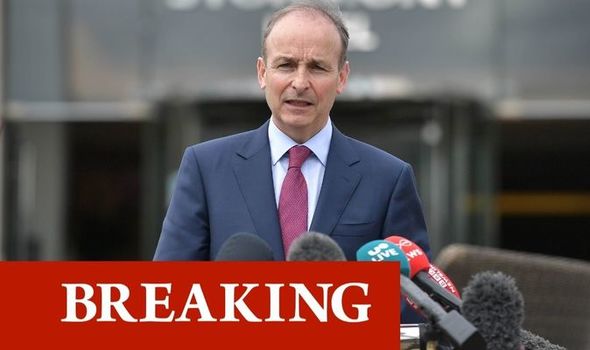 Ireland’s deputy PM Leo Varadkar said he believed the Prime Minister would be prepared to compromise to seal a deal.

He said: “Is Boris Johnson willing to make concessions in those areas? I think he probably is.

“However, he will be very strong on the sovereignty point and I think any set of common minimum standards, any set of level playing field rules, would have to be ones that the UK wouldn’t feel are imposed on them.

“And that’s I think where the sovereignty piece comes in and that will be a circle that’s going to be hard to square.”

Prime Minister Mr Johnson today hinted at a potential rift over striking a deal for future common standards with Brussels.

He told MPs: “Our friends in the EU are currently insisting if they pass a new law in the future which we don’t comply, they have the automatic right to punish us.”

German Chancellor Angela Merkel suggested the bloc would only agree to let Britain diverge from the bloc’s rulebook if Brussels has the right to retaliate.

She told the Bundestag: “We need to have a level playing field not only for today, but for tomorrow, and the day after that.

“Otherwise the result will be unfair terms of competition, which we cannot impose upon our businesses.”

He pointed towards a potential willingness by the British to offer concessions on access to the country’s coastal waters for European fishermen.

He said:”I think there can be scope for compromise on the way in which European boats can continue to access UK waters.

I think we can be very generous with that. I think we can reach arrangements with European countries that allow a staged process so there can be a degree of certainty, so that they can manage that change.”

Mr Gove also said the Government was prepared to agree to non-regression clauses as part of the talks over the so-called level-playing field.

“The issue of particular contention is that last week the EU negotiators didn’t simply want an arrangement whereby we pledge what we call non-regression — which is common in most trade treaties, which means you maintain the standards at the point of entry — they actually wanted an arrangement that meant if the EU adopted new laws, that the UK would have to follow them or the EU would retaliate,” he said.