Michel Barnier finally admitted defeat in his battle to keep Britain tied to Brussels in a last ditch bid to salvage the wrangling over a EU-UK future relationship pact. He agreed to travel to London tomorrow for showdown talks with UK counterpart Lord Frost and has declared a deal by mid-November is within reach. The pair agreed to meet after Mr Barnier reassured the Prime Minister’s chief negotiator of the concessions during an hour-long phone call this evening.

The Brussels diplomat offered the Prime Minister an olive branch by stressing any future trade deal would respect Britain’s “sovereignty”.

Downing Street welcomed the EU’s concessions and agreed to resume the wrangling wrangling over a Brexit deal.

Lord Frost said: “We have agreed that a basis for negotiations with the EU and Michel Barnier has been re-established.”

The pair will hold “intensive talks” over the weekend as part of a newly agreed schedule. 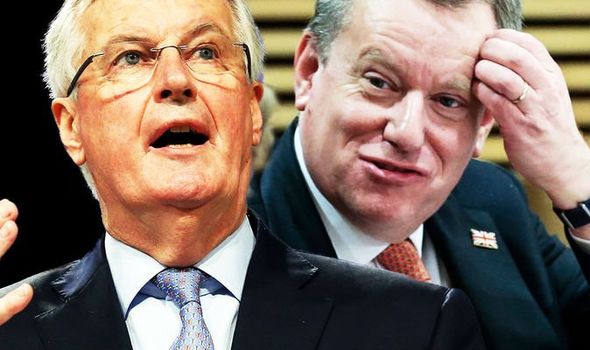 A No10 spokesman added: “On the basis of that conversation we are ready to welcome the EU team to London to resume negotiations later this week. We have jointly agreed a set of principles for handling this intensified phase of talks.

“It is clear that significant gaps remain between our positions in the most difficult areas, but we are ready, with the EU, to see if it is possible to bridge them in intensive talks.”

In a last-gasp climbdown, Mr Barnier vowed to “seek the necessary compromises on both sides” in an attempt to convince Downing Street back to the negotiating table.

Speaking at the European Parliament in Brussels, he said: “The EU wants a deal that will be mutually beneficial to both parties, a deal representing a balanced compromise.

“We will seek the necessary compromises on both sides in order to find an agreement and we will do so right up until the last day it is possible to do so.”

Mr Johnson last week paused negotiations to ramp up preparations for a no-deal Brexit, warning Brussels he would only sanction future talks if the bloc signalled “acceptance that movement needs to come from the EU side as well as the UK”.

Business minister Nadhim Zahawi gave a warm reception to Mr Barnier’s intervention. He said: “It sounds incredibly positive that he’s talking about the sovereignty of the United Kingdom.

“We have always entered these negotiations on the prerequisite, which is only fair and right, that we are treated as a sovereign nation and that we negotiate as an independent sovereign nation.”

The wrangling collapsed after European leaders refused to sign off on an offer for Mr Barnier to intensify the negotiations.

But for the first time, the EU’s Brexit chief yesterday claimed both sides were closing in on a deal before he was forced to slam the brakes on the process.

The Frenchman praised UK counterpart Lord Frost’s “willingness to move forward and shift” in the row over common standards and controls over state subsidies for business.

Mr Barnier also signalled he would water down the bloc’s hardline fishing demands by insisting “there needs to be a fair distribution of quotas for fishermen on both sides”.

“Time is of the essence and time is running out, each and every day.”

EU insiders claimed Mr Barnier had softened his approach as much as possible without sparking an internal row.

European Council President Charles Michel took a much harder approach and accused the UK of “wanting to have its cake and eat it too” in a provocative speech at the EU Parliament.

She said: “Hard work is needed. There is no time to lose.”

And EU vice-president Maros Sefcovic said: “Time is really flying. Every day of lost negotiations is a lost opportunity to find the necessary compromises.”

The concessions came after European carmakers warned EU chiefs their current position “are not in the long-term interests of the EU automotive industry”.

The European Automobile Manufacturers’ Association, which represents BMW, urged the bloc to “reconsider its position” and to adopt a more generous approach to British firms.