Suella Braverman: Only route to the UK is a safe and legal route

In a challenge to Liz Truss, the Home Secretary wants to use powers gained from leaving the EU to drive down net migration – which has barely fallen since 2016. Ms Braverman wants the number to drop substantially, from the current 239,000 to the “tens of thousands”. 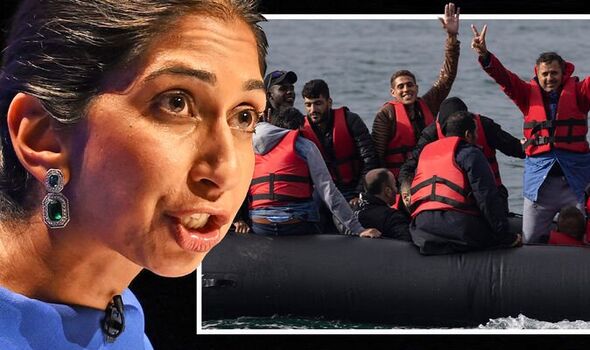 But the intervention has put her on a collision course with the Prime Minister who, in her drive to grow the economy, is understood to be planning to let in an extra 20,000 unskilled foreign workers each year.

The Home Secretary, who ran against Ms Truss for the leadership, said: “We have new visa routes and the power to control who we want to come to the country. I think we should start exercising that power.

“I campaigned to leave the EU because in part I wanted migration to fall. That was in our 2019 manifesto. If you look at net migration figures, they have not fallen – we’re pretty much at the same level as pre-Brexit.”

Ms Braverman intends to change that, saying: “We’ve got the levers in place. Priti Patel and Boris Johnson put in the points-based system: we have new visa routes and the power to control who we want to come to the country. I think we should start exercising that power.” The Home Secretary wants to “substantially reduce” the number of unskilled foreign workers coming in.

But many of her Cabinet colleagues want to relax immigration rules, to help employers fill their near-record 1.2 million vacancies and to get the economy moving.

Ms Braverman told The Spectator current affairs magazine: “I cannot believe that there are labour shortages that cannot be filled.

“We have a large cohort who can work but are not working – and they’re doing that out of choice in many cases. There are people who are choosing early retirement: the number of over-50s who are not working has considerably increased. I think that is a cohort that can be in gainful employment.”

“Ultimately, paying more is going to be the way you get people to take up these jobs. That’s going to be where we go: with a high-wage, high-skilled economy.”

Ms Braverman also said that British farmers must end their “reliance” on foreign workers and replace them with domestic labour plus more automation.

Currently farmers can recruit up to 40,000 overseas employees to pick fruit, vegetables and flowers under the seasonal worker visa scheme – an increase from 30,000 in 2021. In the first six months of this year, 26,481 visas were issued, some two thirds of the annual limit.

The Prime Minister has told Cabinet ministers that she wants the cap raised to 60,000 to stimulate economic growth, according to a senior Government source. 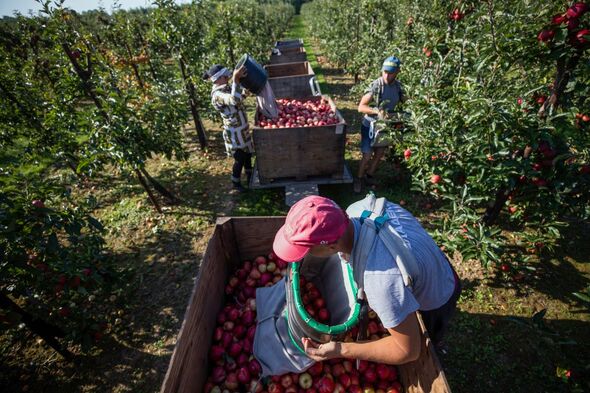 Ms Truss is also understood to be open to the prospect of temporarily expanding the seasonal worker visa scheme to other sectors to fill labour shortages, as well as relaxing the six-month limit on how long individuals are permitted to stay in the UK.

The scheme is currently limited to foreign migrants in the horticulture sector but it was temporarily expanded last year to allow employers to recruit poultry and pork butchers plus HGV drivers due to skills shortages.

The National Farmers Union has campaigned for the limit to be increased to 70,000 – while the Office for National Statistics estimates that up to 75,000 seasonal workers are needed each harvest time.

NFU horticulture and potatoes board vice-chairman Derek Wilkinson has warned the Government that horticulture will contract further if ministers fail to expand the scheme as well as extend the visa period for migrant workers from six to nine months.

Two thirds of the 19,894 migrants who came to the UK on seasonal worker visas in 2021 were Ukrainian, but their numbers fell hugely this year. They have been replaced by migrants from central Asian countries such as Uzbekistan and Tajikistan, according to Home Office data.

Kate Nicholls, chief executive of trade body UKHospitality, said: “The UK’s hospitality sector has huge potential to be a major driver of economic growth and deliver huge value to the economy, but having access to the people to work in this fantastic industry is absolutely crucial.

“The sector continues to face record vacancies that are costing businesses £21billion in lost revenue and it’s clear we need an immigration policy that helps to support industries to recruit the people they need.

“We have made specific proposals to Government about making the existing skilled worker visa route more streamlined and affordable for hospitality businesses to fill these gaps.

“The Government’s intention to look at seasonal visas to boost growth is positive and we’ll be engaging closely on this issue across the entire food and drink supply chain, as well as to support tourism.”