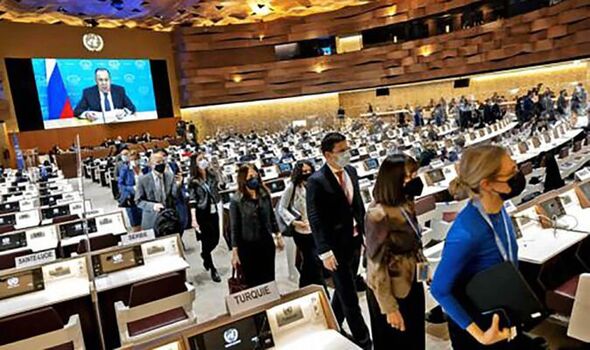 Diplomats staged a mass United Nations walkout in disgust at the invasion. Dozens of officials from countries including Britain, the US, Japan and France stood up and left the Geneva meeting as Putin’s henchman Sergei Lavrov blamed Ukraine for the war in a pre-recorded speech. In contrast Ukrainian President Volodymyr Zelensky’s speech to the European Parliament in Strasbourg was met by a standing ovation.

Foreign Secretary Liz Truss said the walkout in Geneva showed the Kremlin is now isolated on the international stage. She said: “Russia should be ashamed to sit in the UN chamber.”

China said it “deeply regrets” that conflict has broken out between Ukraine and Russia in another sign Putin is now a global pariah. Chinese Foreign Minister Wang Yi called for
a resolution through talks and said Beijing is paying “extreme attention to the harm suffered by civilians”.

Putin is relying on his ties to China’s President Xi Jinping to bail him out of the increasingly tough sanctions on Moscow by the West.

And Britain has launched the first barrage of sanctions against officials and organisations in Belarus in response to that country’s role in Russia’s invasion.Targets included First Deputy Minister of Defence Major General Victor Gulevich.

Foreign Office insiders said he directed the Belarusian armed forces, which have enabled the invasion and consented to the deployment of Russian troops along the border of Belarus to aid the attack.

Ms Truss said: “We are inflicting economic pain on Putin and those closest to him. The Lukashenko regime actively aids and abets Russia’s illegal invasion and will be made to feel the economic consequences.

“There will be nowhere to hide. Nothing – and no one – is off the table.”