A 1% pay rise for NHS workers is “the most” the government can afford due to the economic cost of the COVID crisis, a health minister has told Sky News.

The government is facing a furious backlash after calling for healthcare staff in England to be restricted to a pay rise of 1%.

But Nadine Dorries said it “would be wrong to say a single person in the government does not appreciate the effort” of NHS staff, as she defended the government not recommending a larger pay increase.

Live COVID updates from the UK and across the world 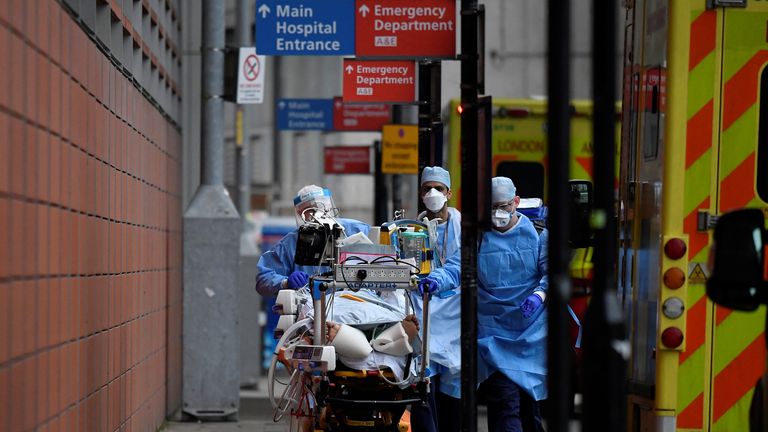 “Of course, we recognise the sacrifice and the commitment and the vocation of nurses and all health workers over the past year,” the minister said.

“We’ve all been touched by, or personally experienced, help by NHS workers.

“But I think it is important to note that the priority of the government has been about protecting people’s livelihoods, about continuing the furlough scheme, about fighting the pandemic, and we’ve put huge effort into that.

“We did not want nurses to go unrecognised – or doctors – and no other public sector employee is receiving a pay rise, there has been a pay freeze.

“But the 1% offer is the most we think we can afford, which we have put forward to the pay review body.”

The Royal College of Nursing, who have called for a 12.5% pay increase for nurses, said a 1% pay rise would amount to only an extra £3.50 a week in take home pay for an experienced nurse.

Inflation is currently at 0.9%, but other unions pointed to forecast inflation of 1.5% this year to claim a 1% pay rise for NHS staff would actually amount to a real terms pay cut.

Ms Dorries, a former nurse, admitted “everybody in an ideal world would love to see nurses paid far more”.

But she stressed there had been “huge borrowing and cost to the government” due to the coronavirus pandemic.

“Nurses have had a 12% increase in pay over the last three years, the average nurse’s salary is around, quite rightly, £34,000 per annum,” she added.

“This time last year, we were just looking in the face of this global pandemic.

“And we all know what the last year has held and what we’ve had to go through; that has been a huge amount of expense on fighting the pandemic.”

In its submission to the NHS pay review body, the Department for Health and Social Care (DHSC) said the total NHS budget was based on a headline pay award of 1% for staff.

Suggesting that any larger pay award could require cuts to services, the DHSC document added: “Anything higher would require re-prioritisation.”

And it said that maintaining “world-class patient care” requires “the right balance between pay and staff numbers through systems of reward that are affordable and fit for purpose”.

In his spending review last year, Chancellor Rishi Sunak froze pay for most public sector workers outside the NHS.

A government spokesperson said: “Over one million NHS staff continue to benefit from multi-year pay deals agreed with trade unions, which have delivered a pay rise of over 12% for newly qualified nurses and will increase junior doctors’ pay scales by 8.2%.

“Pay rises in the rest of the public sector will be paused this year due to the challenging economic environment, but we will continue to provide pay rises for NHS workers.

“The independent pay review bodies will report in late spring and we will consider their recommendations carefully when we receive them.”