COVID passports to allow entry to businesses and events in the UK will “likely become a feature of our lives”, the government has said.

Following a review into whether “COVID-status certification” would be needed within the UK, the government has said they “could have an important role to play both domestically and internationally, as a temporary measure”.

A taskforce led by Cabinet Office Minister Michael Gove has been reviewing whether “COVID-status certification” could be used to reopen the economy, reduce social contact restrictions and improve safety. More than 50,000 members of the public have given “a wide range of opinions”. 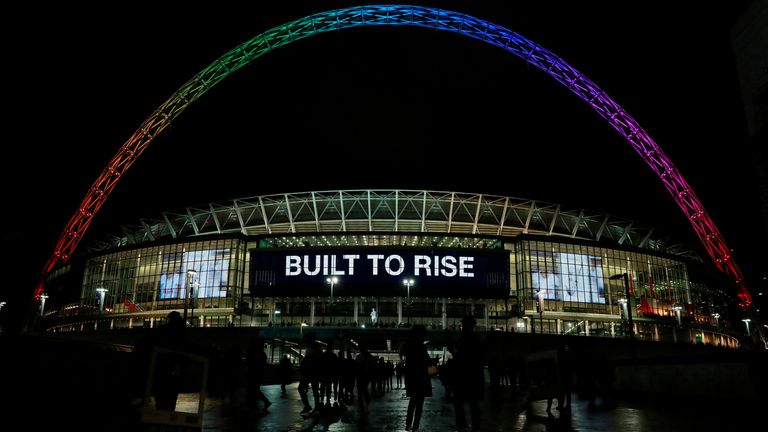 Why would we need the certificates?

COVID-status certification aims to provide reassurance that an individual is at reduced risk of transmission. This could allow some freedoms to be restored more safely, for example by allowing mass events to admit more participants, increased passenger numbers and reduced border restrictions for travellers, and social distancing rules to be relaxed

What would the certificates show?

COVID passports could demonstrate vaccine status, a recent negative test, or proof of natural immunity after having COVID-19.

The review said banning businesses from asking customers for proof of their COVID status to enter would be an “unjustified intrusion”.

As a result, it said it is “right that the government provides a means of easily demonstrating COVID-status” and said the NHS is currently developing a way of proving this, in both digital and non-digital form.

Will the passports – or certificates – definitely go ahead?

Boris Johnson has said no plans “have been finalised yet” and that there would be no changes to ‘step two’ of the roadmap on 12 April.

Asked whether the government would get a vote on the subject, the prime minister hinted that this could happen.

Sky News’ political editor Beth Rigby said: “There is a sizeable rebellion brewing. The Lib Dems are opposed and Labour has yet to give its backing. Boris Johnson really does have a fight on his hands… he could even face a defeat on this.”

Where would the certificates be used?

Social distancing requirements could be reduced by COVID passports at frequently visited settings such as hospitality – pubs and restaurants – the review said.

It said: “COVID-status certification could potentially play a role in settings such as theatres, nightclubs, and mass events such as festivals or sports events to help manage risks where large numbers of people are brought together in close proximity.”

But it added that the government recognises this has “significant implications” so there will be further consultation with industries.

Would they be needed in all settings?

The review said the government believes COVID passports should not be needed in some limited settings, including public services, public transport and essential shops.

And it noted that there should be exemptions for “people for whom vaccination is not advised and repeat testing is difficult”.

Will the certificates be tested?

The government is beginning a COVID passport trial at nine events from mid-April, including Liverpool’s Hot Water Comedy Club, the World Snooker Championship in Sheffield, Liverpool’s Circus nightclub and the FA Cup semi-final and final at Wembley.

It said COVID passports could “play a role” in settings such as theatres, nightclubs and mass events including festivals and sports games.

When would certification begin and how long would it last?

The review said: “Some measures may be required for a period after all adults have been offered a vaccine, in order to prevent a surge…”

And it added: “COVID-status certification is likely to become a feature of our lives until the threat from the pandemic recedes,” but it added that it would likely be a temporary measure.

Will there be exemptions?

The review said: “It is also important that there are appropriate exemptions for people for whom vaccination is not advised and repeat testing is difficult.”

Vaccine passports, especially for domestic use, have been a controversial topic in the past week, with more than 70 MPs, including 41 Conservatives, signing an open letter to Boris Johnson opposing their use.

The government has promised to continue to “explore and trial” the passports and said it will present the review’s interim findings to parliament later this month.

Its review acknowledged there are “equity and ethical concerns” with any form of COVID passport.

If more than about 60 Tory MPs rebel and all opposition parties refuse to support the passports, Mr Johnson could be defeated and the scheme abandoned.