The health secretary has not ruled out the prospect of another national lockdown – and said whether Tier 4 restrictions work is “down to people’s behaviour”.

Asked if the government could take further measures to try and curb the spread of COVID-19, Matt Hancock told Sky News: “We don’t rule anything out.”

Live coronavirus updates from the UK and around the world He said areas in Tier 3 were seeing sharp rises in coronavirus cases, a hint that those parts of the country not already in Tier 4 could be moved up to the highest level of restrictions in the near future.

“This new variant is much easier to catch, it is much more transmissible, and we’re now seeing the effect of that in lots of different parts of the country, unfortunately,” the health secretary said.

“And it means that whereas the old Tier 3 was able to contain the old variant, that is proving increasingly difficult in all parts of the country.”

Asked if Tier 4 restrictions work in keeping the virus under control, Mr Hancock said: “It is down to people’s behaviour, frankly. What matters is, yes of course, the rules that we put in place, but it is also about how people act.

“And frankly what I would say is this: it is critical that everybody in the country does all that they can to reduce the spread of the virus.”

With the emergence of new variants of COVID-19 – first identified in the UK and South Africa – and daily cases regularly surpassing 50,000, there are growing calls for Boris Johnson to act further. That same day, Labour leader Sir Keir Starmer said the government must impose a national lockdown within 24 hours because the virus is “clearly out of control”.

Sir David King, a former chief scientific adviser to the government, told Sky News that ministers should not wait to introduce a national lockdown.

“We don’t have to wait and watch as the new variant of the disease spreads in other parts of the country. We have to see a national lockdown now.”

Sir David also said that ministers should “look very carefully” at the return of pupils to schools. 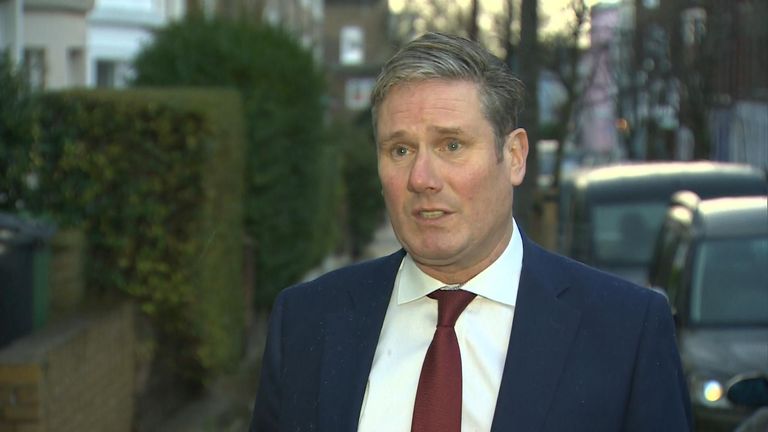 “The impact on teachers and other workers in the schools and on parents [of catching the virus] is bad. It causes an impact in the spreading rate of the disease.”

Sky’s political correspondent Tom Rayner said the health secretary had put a “bit more flesh on the bones” of what the PM said.

“What Matt Hancock said is he pointed directly to Tier 3 areas seeing steep rises, which would imply that the thing in terms of the first approach the government is looking at is whether or not more areas need to move to Tier 4,” Rayner said.

“He also, I thought interestingly, when pushed on whether or not we are in a situation where Tier 4 isn’t enough, he said it’s about people’s behaviour. He said it’s critical for everyone to follow the rules and described it as a ‘massive national effort’.

“What I take from that is that the government is hoping that through a combination of moving more areas into Tier 4 and increasing compliance, is that via more enforcement or different messaging, that that is the approach as things stand.”