Inside the White House, the vibe is shifting, even if the polls have not budged much. 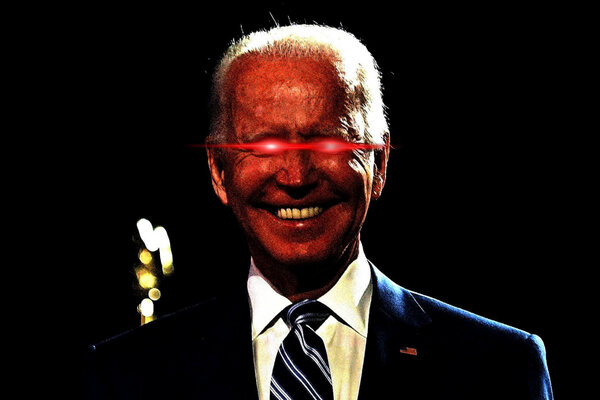 Nobody would ever accuse Joe Biden of being Extremely Online.

As a candidate, he strongly implied that he was not especially interested in social media. In a reversal of the usual way of the political world, his aides made it known that a communications team crafted his tweets and posts, not Biden himself. His campaign focused on winning local TV markets, not winning the morning with the Twitter cognoscenti and the “Morning Joe” regulars on MSNBC.

In an age of micro news cycles that come and go like puffs of wind — and running against an incumbent president who tweeted at all hours, about whatever seemed to cross his mind — Biden’s fuddy-duddy approach to the modern news media offered an implicit promise to voters: I’ll be the remedy to the way that Donald Trump lives rent-free in your heads.

During the Democratic presidential primary in 2020, a Biden adviser vented to Ryan Lizza, my former colleague at Politico, about how Biden’s extremely offline persona was actshually part and parcel of his winning strategy of appealing to what political operatives often refer to as “the normies.”

Those normal voters weren’t glued to their phones all day; they were doing “normal” American things like traipsing off to work, shopping for groceries, calling their grandkids, watching “Wheel of Fortune” and generally going about their lives without following the latest memes or chattering-class obsessions du jour.

“I get this question all the time: Why does the press hate him so much?” the aide told Lizza. “And the answer is because they are younger and they want someone cooler.”

First of all, let’s make one thing clear: The press does not “hate” Joe Biden. But this unidentified aide’s point was that, in lavishing attention on fresher candidates like Pete Buttigieg or more fashionable pols on the left like Bernie Sanders, elite reporters and cable talking heads were missing Biden’s genuine appeal to the older voters who make up the base of the Democratic Party — and who would end up lifting him to the nomination.

It was a chin-out expression of confidence in Biden’s political strategy at a time when the outcome of the primary was uncertain. But it also betrayed enduring, Rodney Dangerfield-esque feelings of resentment among his advisers that Biden don’t get no respect among media tastemakers and pundits.

“People who went through the primary and the general election with him learned to take this longer view of the vicissitudes of the political news cycle,” said Anita Dunn, a senior White House adviser.

She added that, for all the criticism of the president’s age — he’ll be 79 in November — and the decades he’s spent in the Senate and as vice president, his years of experience in Washington had given him a “wisdom” and a patience about the rhythms of deal-making in Congress that would be hard to replicate.

At times, the Biden team’s resentment of what it sees as the press and pundit class’s constant underestimation of his political instincts and abilities has burst into public view.

One incident from the primary stands out. In January 2020, in a sit-down interview with the editorial board of this newspaper, Biden blurted out: “I ain’t dead and I’m not going to die!”

The New York Times editorial board (which is completely walled off from the news operation, where I work) decided to endorse both Elizabeth Warren and Amy Klobuchar instead of Biden, a Solomonic exercise that infuriated his team.

In response, the Biden campaign released a video of a gushing encounter he had with Jacquelyn Brittany, a security guard who had escorted the candidate up to the Times boardroom for his interview. Brittany returned during the Democratic convention to nominate Biden, a story his aides fed in advance to The Washington Post.

Inside Biden’s campaign, his phrase — “I ain’t dead and I’m not going to die!” — became something of an internal mantra, an expression of the grit with which aides felt they approached an election in which they were never accorded the respect they were due.

So, to me, it was especially interesting to watch as White House officials recently began to embrace “Dark Brandon” — a palimpsest of an internet meme that has been painted over with almost impenetrable layers of online irony.

Stick with me here as I try to explain it, briefly.

The net roots of ‘Dark Brandon’

The series of memes, according to sites that track such things, has wended its way from sarcastic jokes about Biden’s supposed dementia to, now, a bear hug by the very team that still goes by the maxim “Twitter is not real life.”

It began in the winter as a tongue-in-cheek appropriation of “Let’s Go Brandon” — a right-wing catchphrase that developed from a TV commentator’s mischaracterization of what the crowd at a NASCAR race was saying about Biden (hint: a rude insult) into an entire ecosystem of coy bumper stickers and T-shirts.